You wouldn't recognize either man from his primary-campaign positions 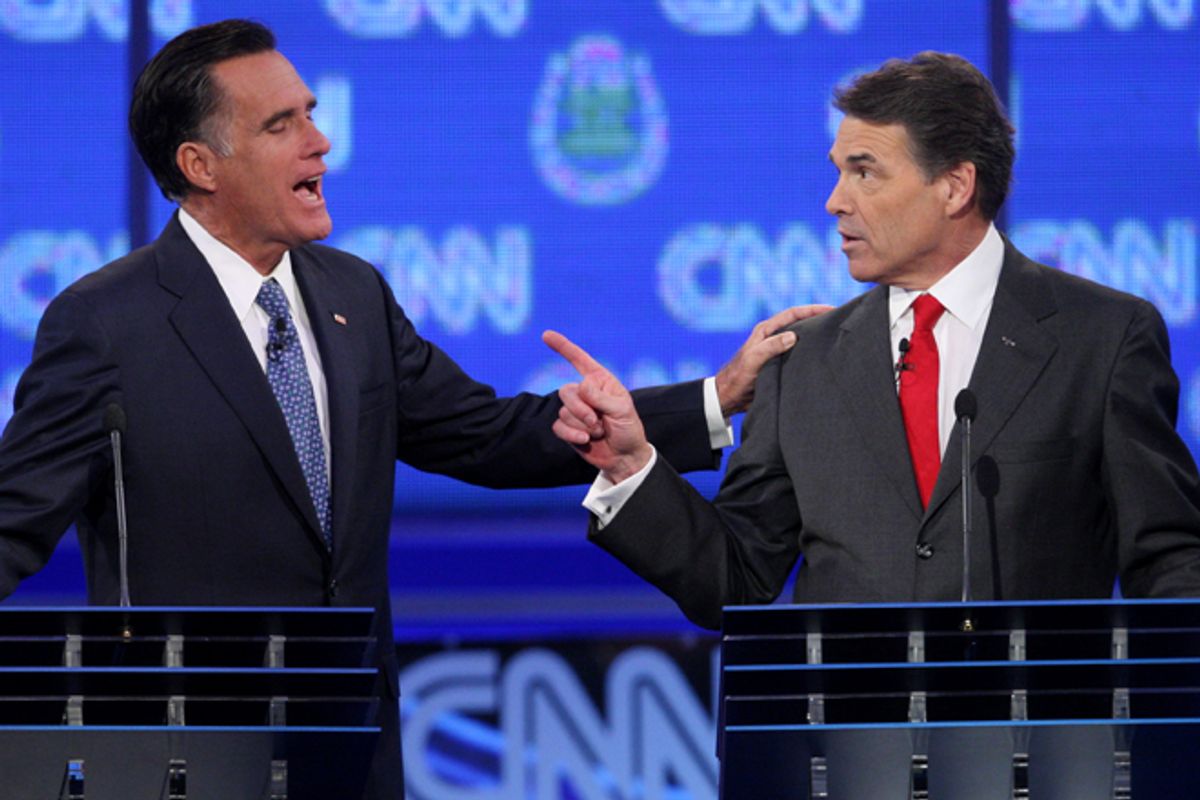 After helping to sink Rick Perry’s presidential campaign with a broadside from the right on immigration, Mitt Romney may have veered so far to the left in the wake of President Obama’s deportation announcement that he may have now flipped positions with the Texas governor, who staked out a tougher position against the law than Romney did.

In a statement today on the new deportation ruling, Perry echoed Romney’s attack on Obama for bypassing Congress, but went further, attacking the actual substance of the rule and the people it will help, which Romney has stopped short of doing. "This administration has failed to provide a secure border, which is essential to national security, and is instead granting blanket amnesty to those who have broken our laws,” he said. Romney has also judiciously avoided using loaded rhetoric like “amnesty.” In fact, while Romney has tried to avoid taking a position on the new rule, he signed on with Florida Sen. Marco Rubio’s response, which was to welcome the substance of the rule while criticizing the means in which it was implemented.

During the GOP primary, when Perry looked like his biggest threat, Romney zeroed in on the Texas governor's relatively liberal stances on immigration. "I've got to be honest with you, I don't see how it is that a state like Texas -- to go to the University of Texas, if you're an illegal alien, you get an in-state tuition discount,” Romney said of a law Perry signed. "That kind of magnet draws people into this country to get that education, to get the $100,000 break. It makes no sense,” he said. Perry responded by suggesting that Romney didn't “have a heart” (he later apologized for using the term).

Today, Perry’s team took pains to separate his support for in-state tuition for undocumented immigrants, which some called Texas’ Dream Act, and Obama’s policy of granting them work permits to a similar class of people. Perry spokesperson Catherine Frazier said the two policies were totally different: “In Texas, we have to make common sense decisions to deal with the failure of the federal government to uphold the rule of law on issues regarding immigration.”

Meanwhile, Romney went from vowing to veto the Dream Act to tolerating Obama’s policy, which does administratively what that bill would have done legislatively. So while Perry may have drifted a bit to the right on immigration after his drubbing during the presidential primary (as Texas Democrats allege), Romney also clearly moved a bit to the left, and the two former rivals have now found themselves trading places.