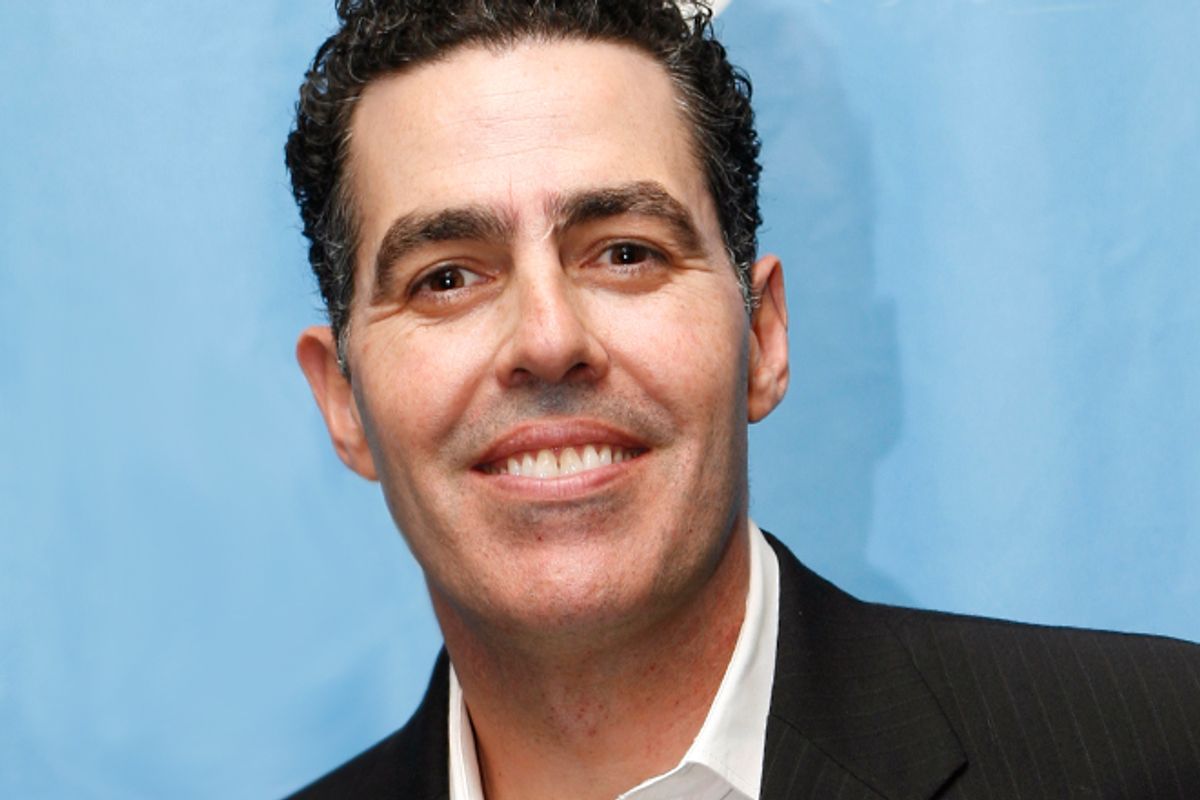 Adam Carolla giving his opinions about comedy is like Mitt Romney offering his thoughts on the BET awards. Of course nobody's going to take it seriously. Adam Carolla knows this. He also happens to have a brand-new book out, so he has an investment in doing whatever provocative thing he can to get publicity. Which means, Hey, why not throw an entire gender under the bus for the sake of attention?

In an interview with the New York Post, the former co-host of "The Man Show" had plenty to say about the comedic limitations of the fairer sex. Describing the world of entertainment, he explained:

They make you hire a certain number of chicks, and they're always the least funny on the writing staff. The reason why you know more funny dudes than funny chicks is that dudes are funnier than chicks. If my daughter has a mediocre sense of humor, I’m just gonna tell her, 'Be a staff writer for a sitcom. Because they’ll have to hire you, they can’t really fire you, and you don’t have to produce that much. It'll be awesome.'

And then, just to make sure he offended a few more people, he added:

When you’re picking a basketball team, you’ll take the brother over the guy with the yarmulke. Why? Because you’re playing the odds. When it comes to comedy, of course there’s Sarah Silverman, Tina Fey, Kathy Griffin — super-funny chicks. But if you’re playing the odds? No. If Joy Behar or Sherri Shepherd was a dude, they’d be off TV. They’re not funny enough for dudes. What if Roseanne Barr was a dude? Think we’d know who she was? Honestly.

Roseanne? She's the one with five more Emmys and six more Golden Globes than your zero, right? Yeah, she's no Drew Pinsky.

Thank you for your all-knowing wisdom, person who also says that "I just believe a mom and dad is better than two dads or two moms. I don't believe this, I just know this." Also, "I'm not into the welfare state, I'm not into all those freebie lunch programs." Because you totally know what time it is! Also, as long we're making sweeping generalizations about large groups of people here, let's just point out that Carolla is a Republican. And if you're "playing the odds," you know how side-splitting they are.

On "The Talk" recently, that show dedicated to ladies and all their humorless little interests, Carolla explained the tactical reasoning behind his douchieness. "If somebody says, 'What do you think about Chaz Bono,' I have to say something that's horrible, so I can get a laugh," he said. "And then everyone goes, 'Oh, that's what you think?' I'm onstage! Nice doesn't get laughs, especially onstage, that's what I'm saying. When did we start holding comedians up to the level of politicians and school teachers? We're comedians. We're supposed to say these things."

Here I thought comedians were supposed to say things that were somehow interesting and witty and original. Note, for example, how Carolla's ex-co-host Jimmy Kimmel has evolved into a relaxed, often adorable and just plain funny performer. Note how Louis C.K., with near supernatural efficiency, manages to be wildly profane and brilliantly hilarious without coming off as a world-class tool. Can't just be the penises! Because if that's all it takes to make for humor, then how in hell do Daniel Tosh and Dane Cook happen? Jeff Dunham is a dude. The prosecution rests.

Carolla's snide dismissal of women – and his invocation of his own daughter and his obviously lower standards for her – are repulsive in and of themselves. But the greatest sin in the whole thing is how tiresome the shtick itself is. This whole boner-waving, chicks-aren't-funny trope was old when Christopher Hitchens did it six years ago. Relatedly: The special needs, "Maybe chicks are funny but in a quiet, thoughtful, clever wordplay way" thing? We're way over that one too. Jesus, how many times does Melissa McCarthy have to get diarrhea in a sink for dudes like Carolla to let this stuff go?

Carolla may indeed believe that women are less competent in the field of humor than he is. Or, more likely, he knew that his comments would rile up the ladyfolk, inspire some attaboys from the He-Man Woman Haters Club, and get him some free publicity for his book. (Did I forget to mention the name of it? Oops!) It's a dumb, calculated move, and a hell of a lot lazier than crafting some actual material. That's why even though Carolla doesn't think we're very funny, I can assure him a whole lot of us ladies think he's a complete joke.