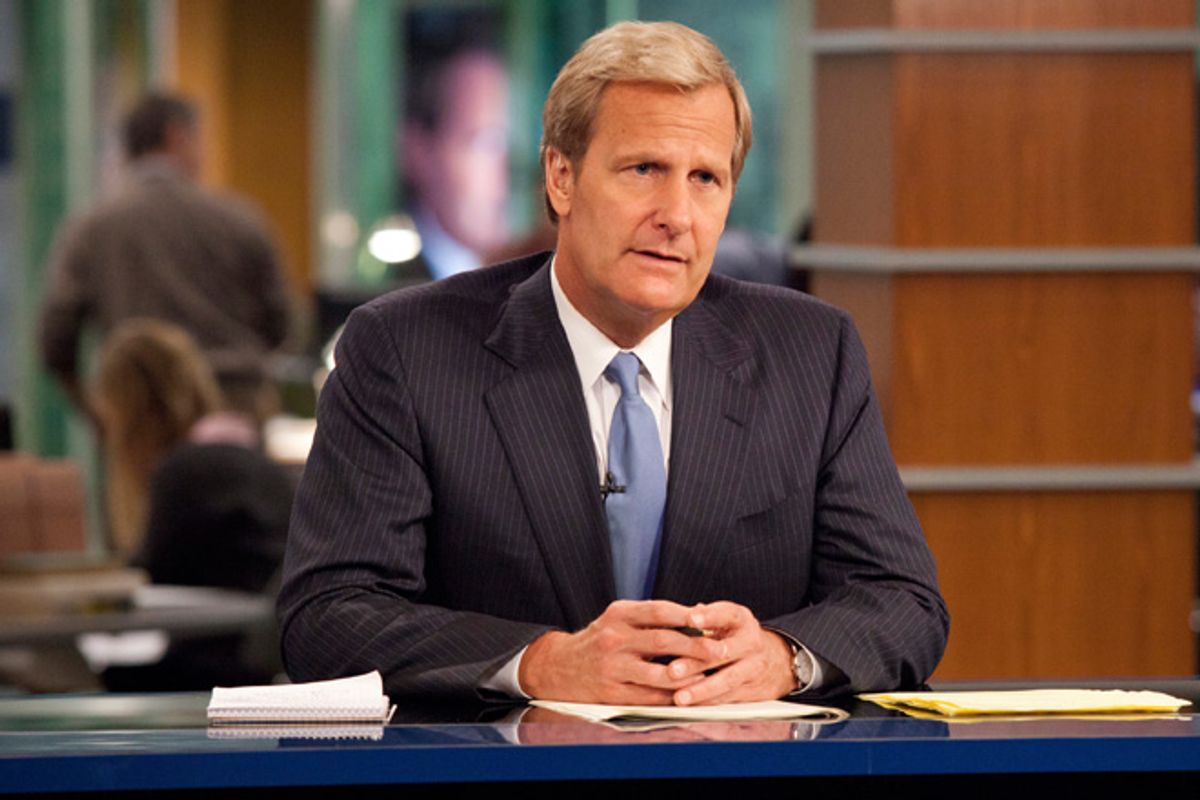 Jeff Daniels in "The Newsroom"
--

In the second episode of HBO’s “The Newsroom,” the new drama created by Aaron Sorkin and set behind the scenes of a cable news program called “News Night,” the passionate, idealistic executive producer Mackenzie MacHale (Emily Mortimer) lectures her staff, “We don’t do good television, we do the news.” Mackenzie is not encouraging her employees to make bad television, but to keep their priorities straight.

Good television is not the priority of  “News Night.”  “News Night’s” priority is to “inform the electorate,” “reclaim the fourth estate,” hasten the “death of bitchiness, gossip and voyeurism,” “speak truth to stupid,” act as “America’s lawyer,” demolish “the bias to fairness,” and be the “moral center of journalism,” among other lofty goals not explicitly name-checked in the first two episodes. “The Newsroom” obeys a similar, if slightly altered maxim: It doesn’t do good television, it does Aaron Sorkin-style television.

In the heyday of ‘The West Wing” these two things were one and the same. Describing something as Sorkin-esque would have been a compliment, shorthand for articulate, intelligent, fast-paced, relevant, easily digestible entertainment for the thinking common man. These days, for that version of Sorkin, one has to go to the movies, where the formal constraints of a screenplay — get all the characters from here to there, and do it in 120 minutes — keep him from self-indulgence.

On TV, in both his failed "Studio 60 on the Sunset Strip" and the less-catastrophic "Newsroom," Sorkin has juiced his strengths into a steroidal shtick. His enormous linguistic, analytic and aggregative capacities have been put into the service of high-strung characters who all sound exactly the same, wield their erudition and earnestness like cudgels, and treat everything from office crushes and basic conversation to the day-to-day tasks of their jobs as an occasion for furious speechifying and verbal somersaults. The results are a captivating, riveting, rousing, condescending, smug, infuriating mixture, a potent potion that advertises itself as intelligence-enhancing but is actually just crazy-making.

"Newsroom" begins when the popular, publicly apolitical news anchor Will McAvoy (Jeff Daniels, in yelling mode) snaps. Asked by a college student “why America is the best country in the world,” he answers with a classic Sorkin barn-burner, all fire and fact, about how that just isn’t so. With his reputation in free fall, McAvoy is forced to team up with executive producer Mackenzie, a seasoned journalist fresh from Afghanistan who imagines herself Don Quixote tilting at the windmills of America’s toxic political culture. She also happens to be McAvoy’s ex-girlfriend. Though McAvoy is a moderate Republican, the two team up to create the noble-minded cable news show of every liberal’s dream, taking it to the Tea Party night after night after night with no concern for ratings or blowback, all while bickering and bantering and trying to make being an “elite Northeastern prick” sexy again. (“Was it ever sexy?” wonders a staffer. “Let’s ask the Kennedy brothers,” Mac replies.)

“Newsroom” overflows with Sorkinisms. Like all his previous TV shows — "Sports Night," "The West Wing" and "Studio 60" — it is set behind the scenes of a collective undertaking; like "The Social Network," "Charlie Wilson’s War" and his play "The Farnsworth Invention," it’s a sort of screwball history, in which recent historical events are turned into gleaming, zippy, dramatically compelling object lessons. And like all of those scripts, it brims with Sorkinese, the celebrated verbose rhetorical mode in which questions are always asked twice, and everyone has a zinger and a statistic and knows how to use them, preferably while walking.

Sorkinese remains a powerful linguistic style, and watching the “Newsroom” actors bat around the dialogue like so many fresh tennis balls is the show’s main appeal. But does it have any substance? Sorkinites would say yes. It’s not just events that shape the world, it’s the way you tell people about them. The premise of “Newsroom” is that if the news were conveyed in an intelligent, measured, accurate and articulate way, it would alter both the way we talk about politics and politics itself, change the public discourse and voting habits, energize debate and democracy.

Listening to the characters on “Newsroom” fervently call for a better kind of news, one begins to think, “Yeah! Why hasn’t someone given us the totally objective, bullshit-detecting, junk-eschewing, civic-minded news show that proves all liberals are right?” The answer isn’t, as “Newsroom” would have it, that everyone in the news business is scared, greedy, crass, jaded, ratings obsessed and/or stupid. It’s that there already are people making this kind of news program and it hasn’t made much of a difference. Whatever one’s personal feelings about Rachel Maddow, Jon Stewart or Shepard Smith, these are news anchors who are all, like Will McAvoy, attempting to speak truth to power, call bullshit on bullshit, and inform the electorate. And are we less polarized because of their efforts? Look, there’s a guy in the White House who gives speeches nearly as good as “The West Wing’s” Josiah Bartlet and what does he have to show for it?

Sorkinese is so much less substantive than it pretends to be. So why was it so captivating and convincing on a show like “The West Wing” and so irksome in “Newsroom”? It’s impossible to argue with Sorkin’s basic observation that something is broken in our news and political culture, but something is broken in Sorkin’s dramaturgy as well, and it’s this dysfunction that dominates the “Newsroom” viewing experience. “Newsroom” is set in the recent past, with each episode focusing on events that have already happened, like the Deepwater Horizon explosion or the Gabrielle Giffords shooting. Perhaps in reaction to the criticism of some of the more ludicrous story lines on “Studio 60,” Sorkin didn’t wanted to make up the news wholesale again. While I am pleased not to see an arc about a sketch-comedian intervening in a hostage crisis in Afghanistan, the decision to Sorkin-the-news only exacerbates the series’ hectoring, nah-nah-nah-nah quality. The generous interpretation of “Newsroom’s" structure is that it give the characters an opportunity to be smarter than us, and gives Sorkin an opportunity to show us our better selves. But in execution it just gives Sorkin an opportunity to be smarter than us, and demonstrate how much better served we would have been if he were the one manning CNN.

The strange structural decisions don’t end there. “Newsroom” is a show about brilliant, elite, well-meaning, serious people who cannot stop talking about their personal lives every- and anywhere.  Huge chunks of time and tracts of dialogue are spent on characters hashing out their private lives in public workplaces, in implausible disregard for anything approaching reality or propriety. The Aaron Sorkin who writes “Newsroom” would have made Josh and Donna having the hots for each other a major story line of every episode of “The West Wing” ever made.

As two young staffers, Alison Pill and John Gallagher Jr., by far the show’s most likable characters, are so adorable together they make their overdone romantic comedy bits work. Mortimer and Daniels don’t have quite as good chemistry or luck. In one particularly wacky plot turn, Mac accidentally sends an email explaining the embarrassing details of her romantic history with Will to the entire staff. Having been treated to a long exposition earlier in the episode about how emails around the “News Night” office are actually sent, Mac’s mistake made me question her competence: How could this woman have lived through Kandahar? The knock-down, drag-out she and Will proceed to have in the middle of the office made me question it further: How could these two gasbags command anyone’s respect?

At the end of giving his speech about why America is not the greatest country in the world, Will reminds the assembled crowd that it used to be. “We stood up for what was right,” he says, “We fought for moral reasons, we passed laws, we struck down laws for moral reasons.” I am as terrified by wingnuts as Will McAvoy, but to describe those Americans we don’t agree with as being unconcerned with morals is, unfortunately, to miss all that is so raw and intractable about, to name just one example, the abortion debate. Will McAvoy, the brilliant, feisty, fierce, dedicated protagonist, is making a specious argument. Which is fitting, since Will McAvoy, a Republican who believes in almost everything liberals do, is a totally specious character, and “Newsroom,” a show about how much better America would be if it only had one really great television program, is a totally specious series.