Saying the White House "can't not give us a pass," Tucker Carlson shows why we need a better class of rich people 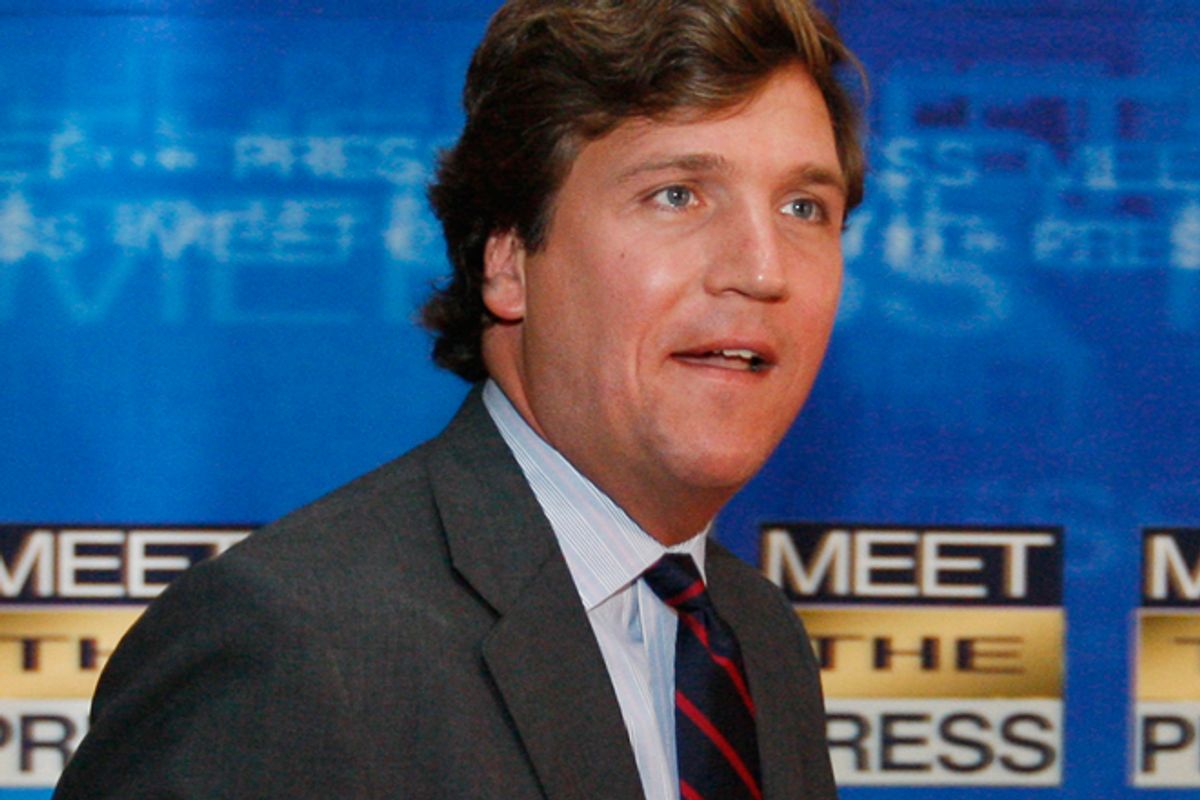 Is there anything funnier than listening to Tucker Carlson whine about why the White House "can't not give us a pass!" in the wake of Neil Munro's prep-boy heckling of President Obama?

Can you say entitlement?

Nothing says "spoiled child" like Tucker Carlson. The son of wealthy Republican William Carlson, a former Los Angeles television anchor who became the head of the Corporation for Public Broadcasting and a U.S. ambassador, Carlson used his family connections to sail into journalism.  Except for a brief moment when he seemed willing to ruffle the powers that be – his first George W. Bush profile for Talk magazine comes to mind – he has done nothing but afflict the afflicted and comfort the comfortable in his career. Examples of his partisan ethics abound, but my favorite was his shrill defense of Scooter Libby in the Valerie Plame case while never acknowledging that his father headed Libby's defense fund. Wealthy Republican family values at work.

Having lost his perch at MSNBC, Carlson wound up on wingnut welfare at the Daily Caller. He's bankrolled by Rick Santorum funder Foster Friess, the Wyoming mutual-fund exec best known for saying ladies should hold an aspirin between their knees as contraception. According to the Daily Beast, Friess gave Carlson $3 million to launch the site and has shoveled more cash his way since. The site's "launch sponsors" included the Chamber of Commerce, the National Mining Association and the Auto Alliance, lobbyist for some of the biggest auto manufacturers.

We spend so much time lamenting the behavior of the poor, but the crises of the last decade make me think we need a better class of rich people. Carlson actually makes Mitt Romney look good, like a tough guy who raised himself up by his bootstraps. Yes, Romney was the son of a governor; his father made a fortune in the auto industry. But like him or not, Mitt Romney succeeded on his own as well, rising at Bain Consulting to run Bain Capital. It's not a career that shows a lot of social conscience, but he had to be good at it in order to acquire (and often downsize) so many different American companies. He's not a job creator, but he certainly created a great job for himself, and he was apparently excellent at extracting big fees and profits from the companies he worked for. Carlson is excellent only at being the poster boy for spoiled rich kids everywhere.