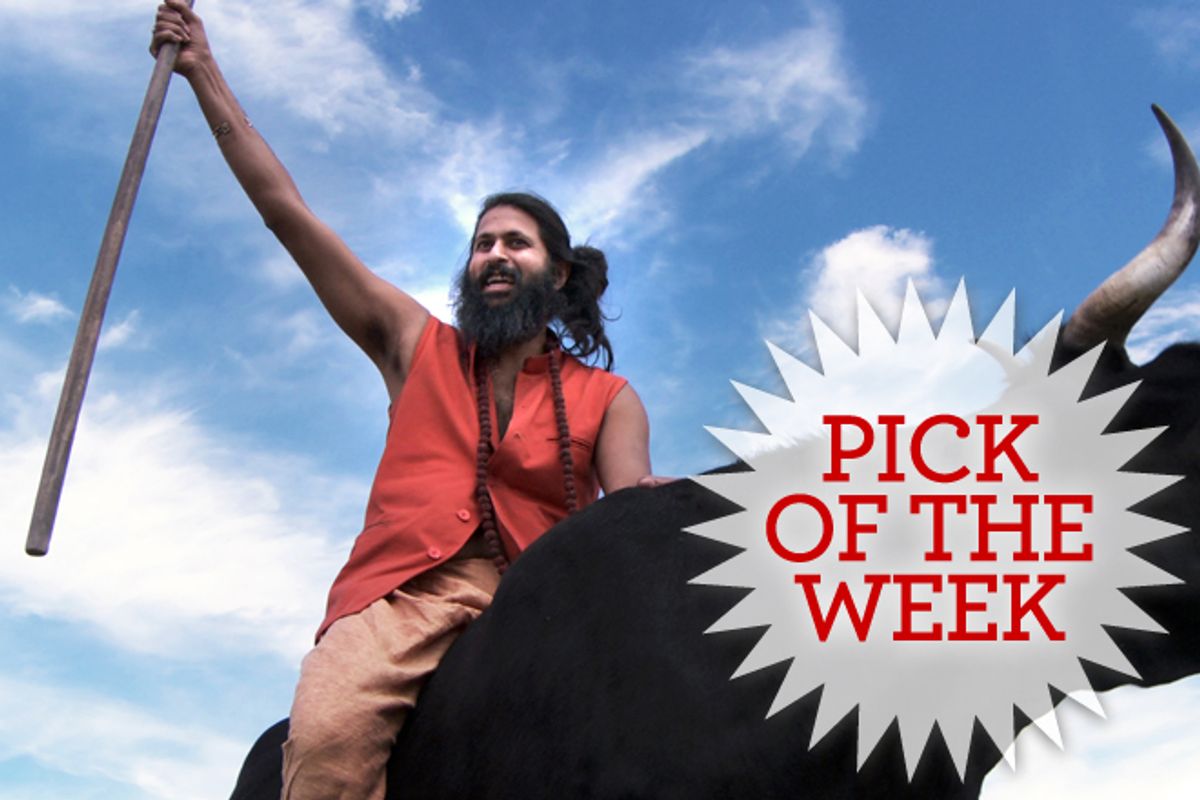 When Vikram Gandhi set out to become a guru, he didn't expect to really become a guru. But that's what happens in his slippery, ambiguous, tense and finally moving "Kumaré," which is officially termed a documentary but could also be considered as the video corollary to a thorny work of performance art. A college-educated American of Indian parentage who was born and raised in New Jersey, Gandhi grew out his hair and beard and moved to Phoenix as a yoga teacher and spiritual guru named Sri Kumaré, to all appearances a loincloth-clad holy man from the Himalayas. (Gandhi says he borrowed Kumaré's heavy accent and slowed-down mannerisms from his beloved grandmother, herself a devout Hindu.)

He arrives in town with two lissome female assistants -- one of them a genuine yoga instructor -- and begins to book slots in Arizona yoga studios and other New Age venues. His first class attracts exactly two students, but one of them, a middle-aged woman named Toby, immediately feels a strong connection to his teachings. In a scene that I think holds the key to the entire film, Gandhi-as-Kumaré asks Toby why she needs his spiritual help. She has a very stressful job, she says -- she is a death-penalty attorney, who tries to help convicted murderers before they are executed by the state. You can see Gandhi's eyes widen for a second, and almost hear his internal oh, crap. This lady's life is full of profound and painful challenges, in literal life-and-death situations, and here he is spoofing her as a phony Indian holy man.

I think the best thing to say, without detracting too much from the exceptional suspense that builds throughout "Kumaré" -- toward the inevitable and terrifying moment when Gandhi will reveal himself -- is that from that moment forward the question of who is the teacher and who the student is very much in question. When Kumaré tells his 14 or so core disciples, late in the movie, "You are all my gurus," he is no longer blowing smoke (if he ever actually was). A remarkable transformation has occurred, and Gandhi's act of deception has actually become an aspect of the straightforward self-help gospel that Kumaré preaches.

"Kumaré" has been widely compared to Sacha Baron Cohen's "Borat" movie and persona, and it's easy to see why: Gandhi also engages with ordinary Americans while pretending to be something he isn't. (His devotees are predominantly white, and if Gandhi ever encountered a Hindi-speaking Indian who might have challenged his credentials or background, we don't see that in the movie.) But the resemblance is largely superficial; Borat is a confrontational figure, meant to expose the ignorance, prejudice and craven stupidity of those he meets. If Gandhi's project began out of skepticism, out of an impulse to expose the bogosity of gurus and the silliness of Americans' thirst for supposedly genuine Eastern spirituality, it contains almost no element of Borat-style cruelty or hostility. Beyond that, it rapidly morphs into something weirder and more interesting, almost a 21st-century illustration of the principles described in William James' "Varieties of Religious Experience."

There are certainly moments early in the film when Kumaré's students may look gullible or foolish, performing his made-up, air-guitar yoga moves, or chanting "Be all that you can be" in Hindi. But that doesn't last long, and as any religious scholar (and many religious practitioners) will tell you, the content of a ritual is almost always less important than the shared experience of performing it. OK, I feel kind of bad for the guy in Tucson whom Kumaré convinces to pray before an altar bearing pictures of Barack Obama, Kumaré and Osama bin Laden. But, again, who is to say where meaning and value lie in an area of human experience that is entirely subjective, and so firmly resists rational inquiry? Gandhi gradually moves away from any spoofy and/or debunker intentions, determining instead to use his phony-guru persona to impart ideas that he actually believes, which mostly resolve to teaching the wounded birds of his flock that they are more capable of healing themselves than he is. Kumaré repeatedly tells his students, in fact, that he is a performer or a liar or an illusion, and that he will soon be leaving them. If most of them receive that language as mind-bending Eastern philosophy, they eventually learn that it is literally true.

Kumaré's relationships with his devotees -- with Toby the death-penalty lawyer and the jocked-out recovering cokehead and the retired salesman who spends all day eating free samples in grocery stores and the single mom who yearns to lose weight and restart her romantic life -- are unmistakably real friendships, albeit ones built on a false premise. I won't go into detail about what happens during and after the "Unveiling," when Kumaré reveals his secret, except to say that the true nature of those friendships is also revealed, for good or ill. But when he's back at home in New York, riding the subway and attending a college reunion, Gandhi reflects that he had deeper and more affecting relationships with other people as Kumaré than he has ever had as Vikram, his supposed real self.

My personal view, which is supported by plenty of evidence in the film, is that Gandhi's own spiritual quest was always more ambiguous -- and closer to being "genuine," or at least heartfelt -- than he admits. He himself is an American who feels (like so many of us) an ambivalent attraction-repulsion relationship toward his family's Old World religious tradition. He recounts that he found Hindu doctrine and ritual embarrassing as a child of 1980s suburbia, but fondly remembers his grandmother's tranquility as she said her prayers. He studied religion in college and spent a fair amount of time in India, meeting various gurus and swamis (whom he mostly found just as phony as their American counterparts) and learning their approaches to traditional practices. To prepare for his role as Sri Kumaré, he began doing yoga intensively and practicing daily meditation. One way of putting it is that whatever was being transmitted through him -- call it authentic spirituality or hypnotic suggestion or collective delusion -- did not depend on his sincerity or his conscious intentions. Another is that Gandhi cloaked his desire to connect with his own ancestral tradition in irony; in order to make it real, he had to pretend it was all fake.

"Kumaré" is now playing at the IFC Center in New York. It opens June 27 in Boulder, Colo., July 6 in Lake Worth, Fla., July 13 in Denver and Riverside, Calif., July 27 in Los Angeles and Tucson, Ariz., and Aug. 31 in Seattle, with more cities to follow.