Can the Motor City save its youth from each other? 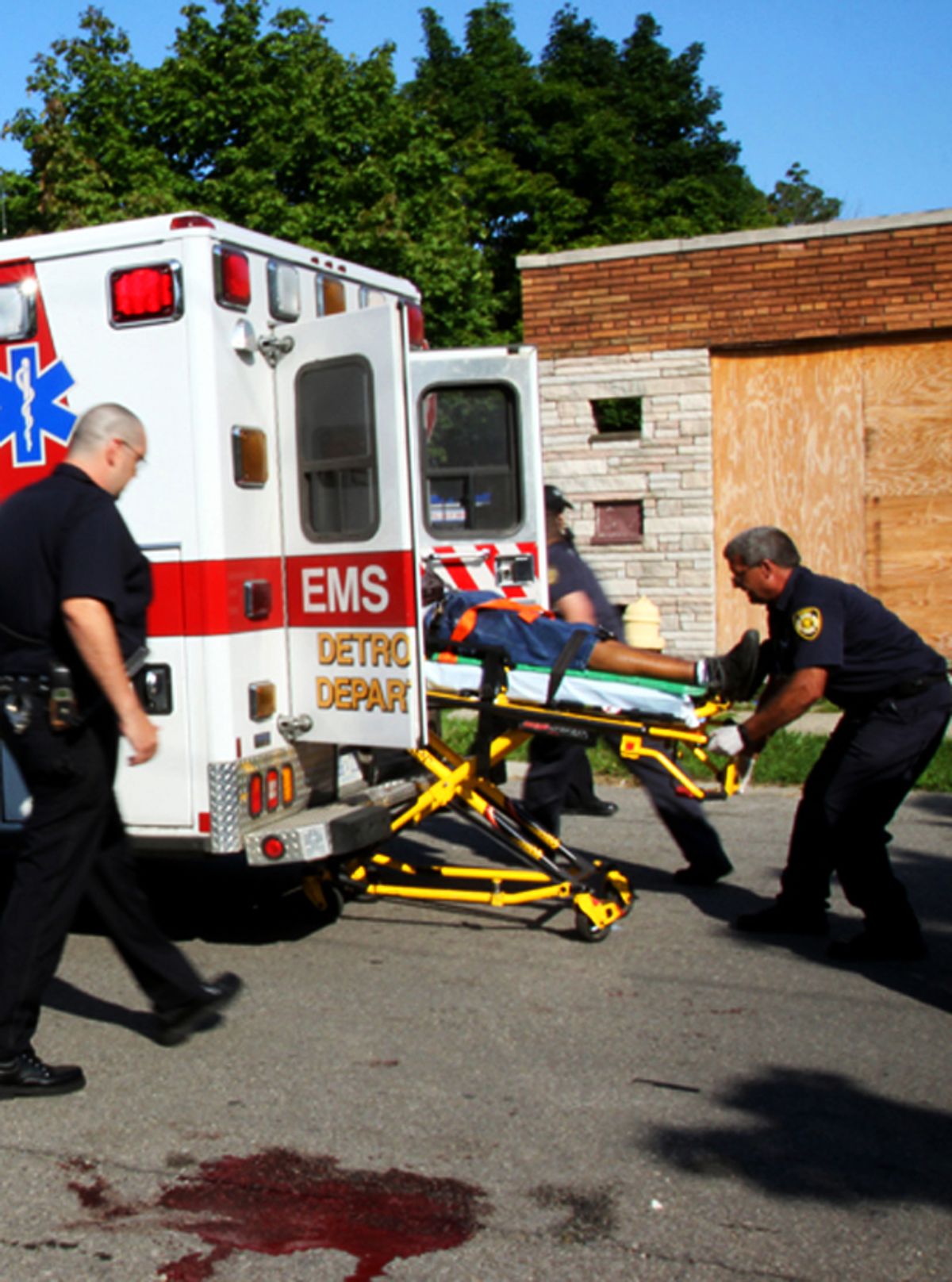 Medics rush a fatally wounded shooting victim to the hospital at Morang and Somerset in Detroit. (Amber Hunt)
--

As Detroit police officials prepared last month to face media questions about yet another fatal shooting of a teenager on the city’s northeast side, Officer Monica Evans faced a different type of crowd: high school students.

Surrounded by about 25 students from around the city, Evans asked the question that she anticipated her boss, Police Chief Ralph Godbee Jr., would get from reporters: “What could law enforcement have done to prevent this?”

“Nothing” isn’t an option, of course, in a city that has only recently dipped below an average of a murder a day— a drop that coincides with a population hemorrhage of more than 200,000 people in the past 10 years.

In a May 6 speech to the Detroit branch of the NAACP, U.S. Attorney General Eric Holder commended the agency and the city for the fight they’ve waged so far, but he said there’s much more to do.

“Nationwide, homicide is the leading cause of death for black men between the ages of 15 and 24,” Holder said. “More than 50 percent of all young people are exposed to violence at some point in their lives, either as victims or as witnesses, and one report even showed that here in Detroit an average of two young black men are killed every week—a murder rate nearly seven times higher than the population at large.”

On the whole, Detroit is trying.

The city is one of six major U.S. municipalities working with the National Forum on Youth Violence Prevention aiming to share experiences and initiative ideas in hopes of changing not just statistics, but a culture lacking the empathy to grasp the heartache they’re unleashing on generations.

The forum includes local and federal law-enforcement agencies, including the Department of Justice.

Representatives from the cities are coordinating regularly via email and twice a year in person in Washington, D.C., to learn how each other’s efforts are paying off.

“That’s the benefit of this partnership,” Officer Evans said. “It’s to bring everybody together under one umbrella to utilize each other’s best wisdom, knowledge (and) experience. Everybody has to put their own feelings aside and their own egos. It’s not about us; it’s about what we can do.”

For Evans, the key is instilling humility and empathy among so-called at-risk young people.

“Humility and empathy really go together. It takes a lot more for me to love on you when you’re wrong to me,” she tells students. “That is not weakness. That is strength.”

Evans knows about strength. The 39-year-old Detroiter began as a schoolteacher and switched to law enforcement in hopes of reaching even more young adults. In addition to her three biological children, she has adopted another child and become legal guardian to three teens labeled as “troubled.” One of the teens’ mothers had died of a drug overdose and father was in prison.

Detroit has focused on three neighborhoods of extreme violence, including the 6.5-mile area close to Osborn High School near 7 Mile and Hoover — an area much rougher than the 8 Mile stretch that rapper Eminem made famous. Last summer, the area saw 38 shootings, eight of them fatal. And it was within that area that three teens were gunned down May 21 in a gang-related shootout that left one 16-year-old dead, prompting Evans’ conversation with high schoolers.

Also targeted are neighborhoods around Cody High School on the city’s northwest side and Deny High School, which, like Osborn, is on the northeast side.

One of the programs, Safe Routes, uses volunteers to help cover the routes around the high schools and feeder schools to keep watch over kids walking there. Evans said the department analyzed EMS calls to target the routes and time extra help was needed.

Operation Safe Passage, meanwhile, focuses on finding alternatives to “exclusionary discipline” — usually suspension or expulsion. That’s imperative, Evans said, because zero-tolerance rules at some schools forces young adults from the classrooms to the streets, making them more likely to either commit crimes or become victims themselves.

“When they’re kicked out of the education system, they become more detrimental to society,” Evans said.

Tackling truancy is the first step.

Under the Youth Violence Prevention Initiative, Detroit police have conducted three truancy sweeps. Instead of punishing kids playing hooky, they aimed to find out and address the reason behind it.

Of the three schools participating, Osborn has been the most involved, and Evans said the numbers indicate the initiative is making an impact: In the 2010-2011 school year, about 300 students were suspended or expelled — an average of more than 30 per month.

In the first three months of the 2011-2012 school year, after the district loosened its zero tolerance policy, just 14 students were expelled or suspended.

“In the same time period, crime stats decreased in that area,” Evans said.

Time will tell if the two are directly connected; but to Evans, it’s a good start.

The initiative’s remaining cities aren’t on par with Detroit’s crime rate. Chicago saw 432 murders or non-negligent homicides in 2010, the last complete year for which data is available from the FBI. The city has about three times Detroit’s population. Salinas, San Jose, Boston and Memphis have much lower murder rates.

Still, each has problematic enclaves that justify extra attention, said Jeffrey Butts, director of the Research and Evaluation Center at John Jay College of Criminal Justice in New York.

“It doesn’t matter what the national trend is when you’re talking to someone who’s just heard about a kid in his neighborhood shot on his front porch,” said Butts, who helps compile and analyze the six cities’ programs.

“You can talk about the national average going down by 50 percent, but national trends don’t matter much to you if you’ve had four school shootings.”

Detroit seems to be the poster child for defying optimistic statistics. From January to June 2011, a time period in which the number of murders decreased by 5.7 percent nationally, Detroit homicides went up by 1.2 percent, according to data compiled by the FBI.

Walk through the city’s hardest-hit neighborhoods, where murder victims’ bodies are routinely discovered in burned-out houses and vacant lots, and you’ll have a hard time grasping that Americans, on average, are far safer than they realize.

“The probability of any American being a victim of violent crime on average is lower than it’s been” in nearly 20 years, Butts said.

That’s a surprise even to his 81-year-old mother, he acknowledged, because media report on slayings so much. But victim surveys, which Butts considers the most accurate method of tracking crime prevalence, indicate the country is safer than it’s been in decades.

But Evans cautions that good news in crime is never good enough: Even one young person dying is too much. She’s seen the faces of Detroit’s survivors and has even taken guardianship of a few at-risk children.

“You have to engage people to know not to be fearful of the minority that’s messing it up for the majority,” she said. “The majority are all doing great things.”

With a change in practices and mind-set, she predicted, “we’re going to see a real difference if we keep this going over the next few years.”