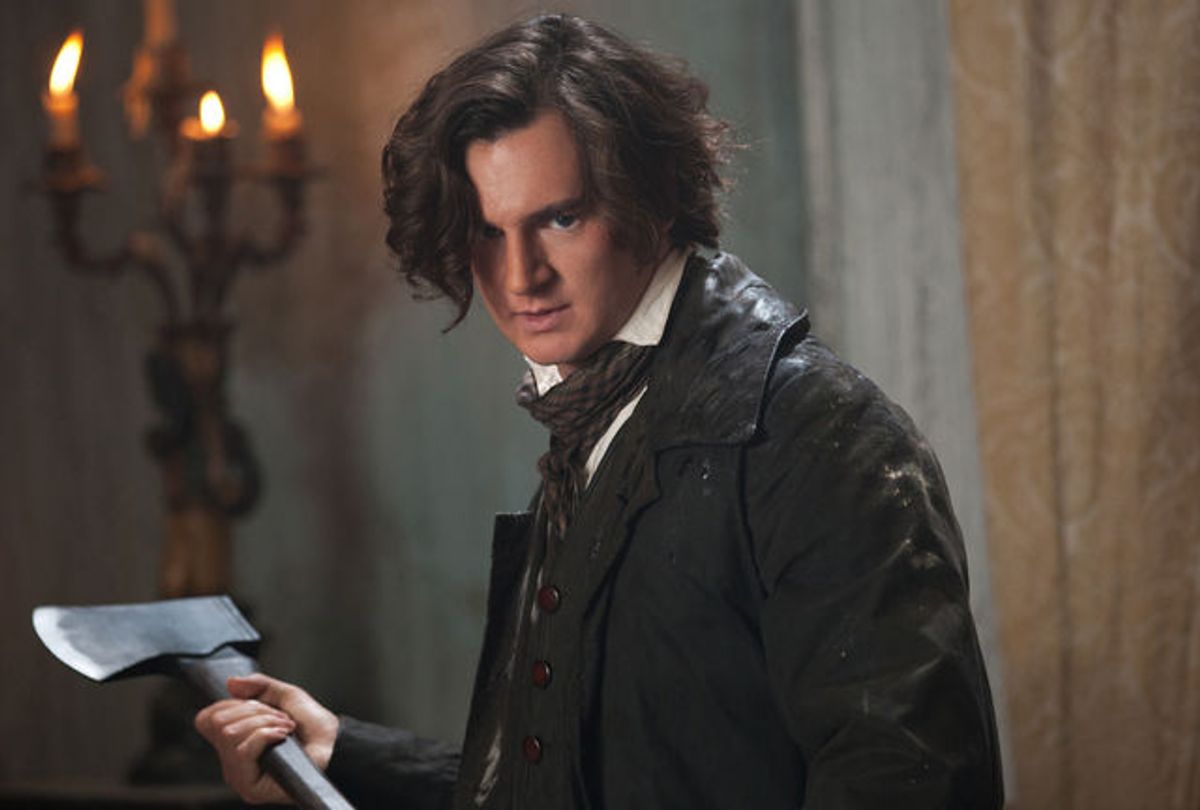 If your problem with Quentin Tarantino's alternate-history World War II action flick "Inglourious Basterds" was that it lacked enough high concept, then "Abraham Lincoln: Vampire Hunter" is for you. There's definitely some empty-calories, summer-movie fun to be found in this ludicrous genre mashup, most of it courtesy of maniacal Russian director Timur Bekmambetov, who stages hilarious, imaginative, almost free-form action sequences like nobody in the business. There's a scene in this movie that involves an ax fight between the young Mr. Lincoln and a slave-trading vampire mastermind, set amid a stampeding herd of horses, who are alternately used as conveyances, obstacles and weapons. In its own idiotic and limited way, it's a work of genius, and you could almost say that about the movie as a whole.

Bekmambetov marshals a first-rate production design team for this screen adaptation of Seth Grahame-Smith's bestseller (scripted by the author), and the opening shot of this movie is spectacular: We see the contemporary skyline of Washington, and then watch as all the modern buildings and infrastructure gradually melt away, taking us back to the marshy city of our 16th president, with the White House surrounded by open fields and stone row-houses, and the Washington Monument only half completed. Lincoln's young life in the Indiana wilderness and the frontier capital of Springfield, Ill., is also captured in impressive detail. One can only wish that the story and characters seemed either a.) halfway convincing in the context of 19th-century America, or b.) worth the time and effort it takes to watch it, let alone the immense expense and hard work of making it.

In Grahame-Smith's earlier hit novel, "Pride and Prejudice and Zombies" (which has also been rendered into a film, to appear later this year), he simply interpolated new material and themes -- presumably never contemplated by Jane Austen -- into a public-domain literary work. There's some of that in the book "Abraham Lincoln: Vampire Hunter," but the whole thing is way more elaborate, involving a secret Lincoln journal (entirely fictional, with a few tidbits from his known works) and a reworking of Civil War history in which the slave-owning caste of the antebellum South becomes a secret conspiracy of undead bloodsuckers. That's sort of halfway clever, as long as you don't think about it too much, but in the movie version Bekmambetov and Grahame-Smith have jettisoned the elaborate back story and modern-day framing device in favor of nonstop splatter and silliness, which exposes how thin this idea really is.

Looking for all the world like a digitally engineered younger version of Liam Neeson, Benjamin Walker gives a curiously leaden performance as the ax-wielding hero Lincoln, although he's ably supported by snaky-looking English actor Dominic Cooper, as a repentant vampire who has turned against his own kind. (Has anyone written a doctoral dissertation about that archetype yet?) But it's not Bekmambetov's splendiferous and camped-up action scenes, culminating in a vampires-on-a-train climax that would dazzle Sam Peckinpah, that are the problem here. It's the fact that adding a bunch of jokey, gory vampire battles to the most violent and dramatic period of American history is not merely gilding the lily, but is an atrocious insult to the memory of those who lived and died then, and to the historical resonance of those events, which emphatically continues to this day.

It's actually not OK, in this case, to say smirkingly that history is boring and would be way cooler if it had more sexy vampire chicks and stuff blowing up. The struggle against slavery -- a practice that had poisoned our country, root and branch, from its inception -- and the worst war in American history and the life and death of our greatest and weirdest president have enough action and suspense for 20 movies. Sure, this movie is meant as camp from beginning to end, and isn't trying to replace real history. (One of its last lines of dialogue is: "Abraham! Hurry up or we'll miss the play!") Which ought to mean that I'll forget how much it pissed me off really quickly, and only remember the horse-flinging.