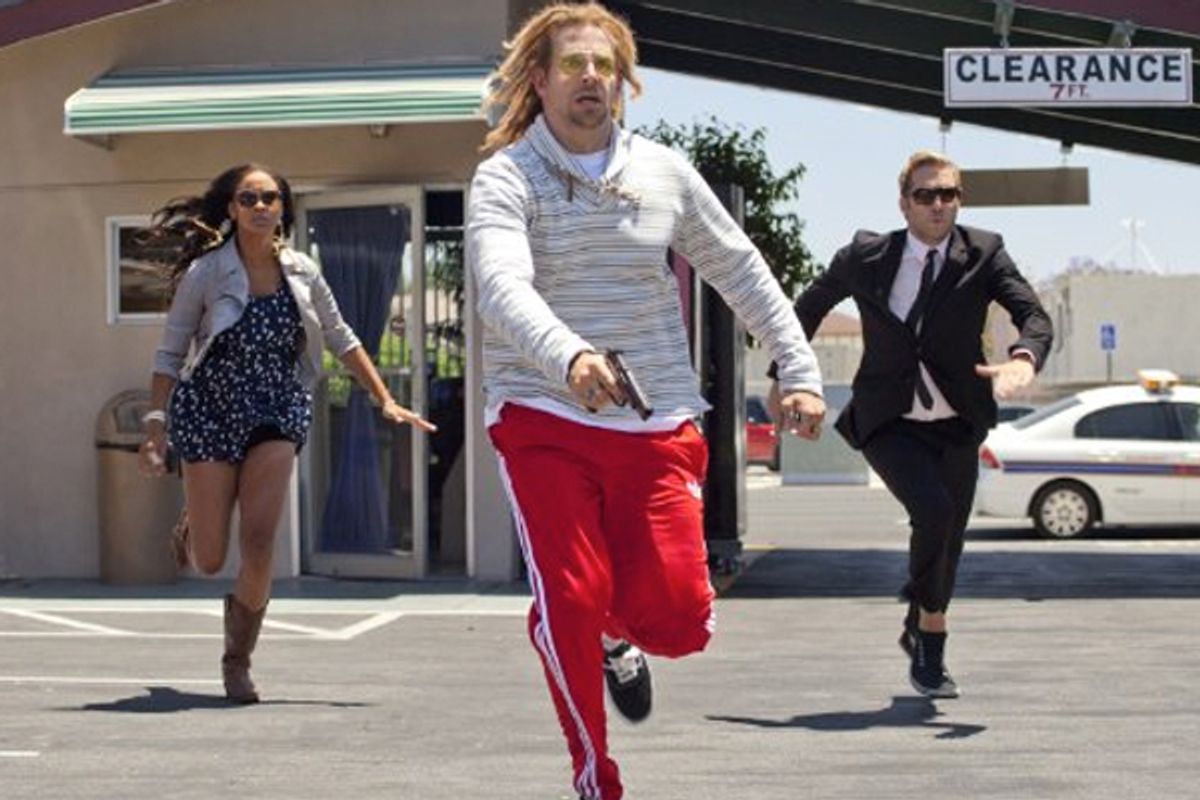 There are any number of reasons to cross "Hit & Run" off your summer must-see list. I could tell you that Tom Arnold has a prominent role in it, and we could wrap it up right there. I could say that while Dax Shepard is appealing on "Parenthood," he may not yet be Renaissance-man enough to direct, write, co-produce, co-edit and star in a major motion picture. But there's another reason for the stench emanating from this wacky caper.

The plot takes its cues from the barrage of road trips-run-amok comedies of recent years, notably "The Hangover" and "Due Date." Shepard, the poor man's Zach Galifianakis, is an ex-getaway driver in the Witness Protection Program who runs afoul of both the feds and his old gang. Late in the film's trailer, Shepard is confronted by his nemesis, played by a dreadlocked Bradley Cooper, who tells him the source of his quest for vengeance. "I got [bleeped] in prison." But wait! The joke doesn't end there! Shepard, whose character is wittily named "Charlie Bronson," asks, "Was it a black guy?"

Are your sides splitting yet? How about when he presses on: "Was it a Mexican guy? Was it one of those white guys?" Finally, Cooper relents: "It was Filipino. Solve your dilemma of what part of the world my ass traveled to?" This, ladies and gentlemen, is what serves for the kicker of the trailer; the big finish that the film's creators hope will stick in your mind. Well, it's memorable, all right. I don't know about you, but I haven't laughed so much about prison rape since all those Sandusky jokes on Friday. Which is to say, not at all.

It's not that the subject matter – rape and race – are inherently taboo. Deft comedy can wring laughs out of the most shocking and horrible things in life. "The Book of Mormon" included gags about female genital mutilation, baby rape and getting sodomized by the titular tome. And what happened? The New York Times rhapsodized that it was "something like a miracle," and it won the Tony Award for best musical. The show's foulmouthed big sibling, "South Park," has for 15 years made sport of every religion under the sun, of famine, of cannibalism, of homosexuals, of abortion, and pedophilia, and it's one of the greatest comedies in television."Louie" built an entire episode around child abduction and sexually abusive dentists. Chris Rock can build a routine around the correct use of the N-word. See? When you think it through and make humor about something, it works. When you think that dude rape in and of itself is enough to sustain a joke, you're making movies with Tom Arnold. Even "Office Space's" light reference to "Federal Pound Me in the Ass Prison" was more ambitious than this.

We still have miles to go on the issue of how to talk about sexual abuse of women. But we are also incredibly backward in the ways we depict the sexual abuse of men. If it's abuse at the hands of a woman, it's all good-humored fantasy fulfillment. (It's worth noting that one of the producers of "Hit & Run" also produced "Wedding Crashers," which featured Isla Fisher having her way with a helpless Vince Vaughn.)

And, in much the same way that anything "so gay" is deployed to demonstrate all that is puny, weak and humiliating, male rape is used for emasculating comeuppance. A few years ago, Andy Borowitz wrote a humor book called "Who Moved My Soap? The CEO's Guide to Surviving Prison" that included advice on "trophy wives, and how to avoid becoming one." And just Sunday night, NBC reporter Tom Sherwood quipped at D.C.'s RAMMY awards that Harry Thomas Jr. was busy "having his own RAMMY Award" in jail, adding later that "I think it does evoke prison sex, consensual or not." Side-splitting either way, right? Ever wonder why, though men make up at least 3 percent of rape victims, the crime so often goes unreported? Couldn't have anything to do with our cultural propensity for turning sexual violence against men into a smug joke?

Which brings us to the "Hit & Run" gag, one that manages to go the extra mile for pointing out that the only thing more degrading than being raped by a dude is being raped by a minority dude. That's the sum of its insight there. The entirety of its wit. Crowing over the possibility of Jerry Sandusky being sodomized is an insufficient punch line. Likewise, smirking over Bradley Cooper being violated by a Filipino is not comedy. It's sad and creepy and makes you seem really, really messed up and insecure, Dax Shepard. But at least you got to make a movie about a guy in the Witness Protection Program. Because if I were you, I wouldn't want to show my face for a long, long time.