Designer for the age of austerity 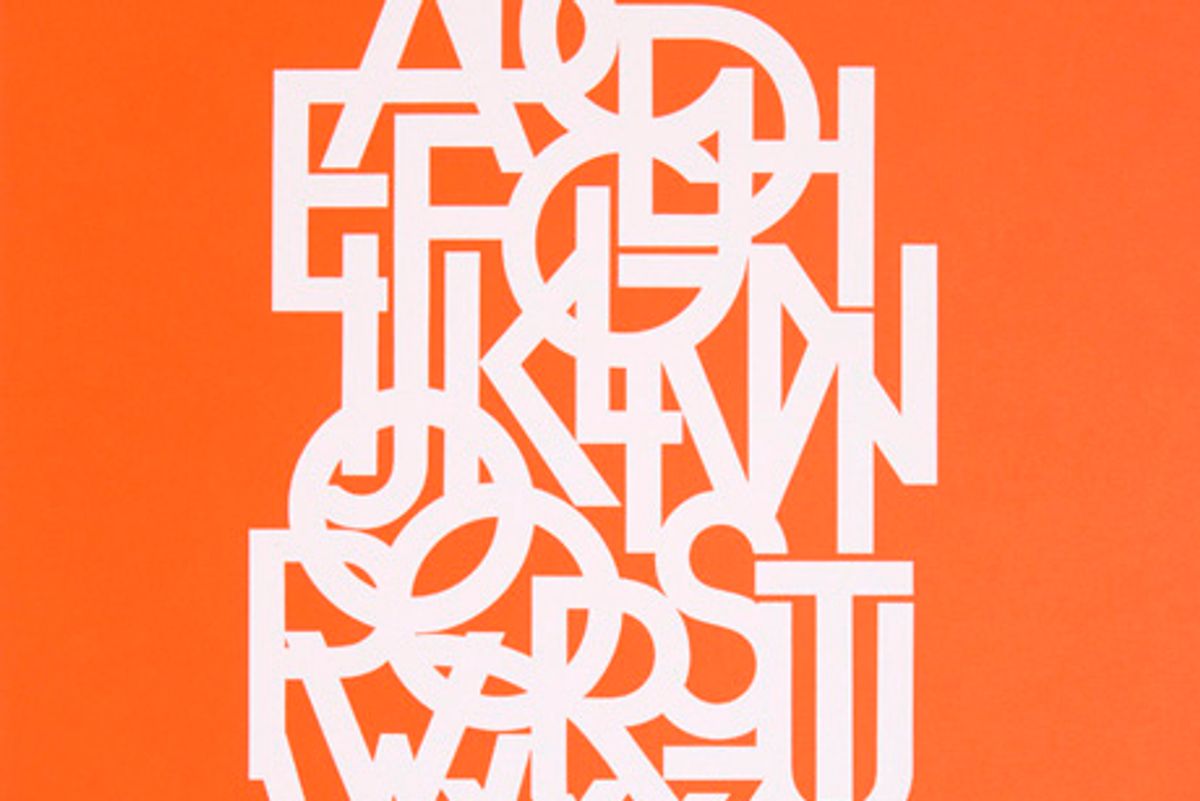 Unit Editions’s forthcoming monograph on Herb Lubalin already seems poised to be the design publishing event of the summer. Scheduled to begin shipping in August, Herb Lubalin: American Graphic Designer, 1918–81 is the first major work on Lubalin since 1985 — and it is indeed a major work, with 448 pages and including hundreds of examples of the pioneering designer's work, many never before seen, as well as a lengthy and revealing biographical essay by Adrian Shaughnessy (who co-edited the book with Tony Brook and Alexander Tochilovsky). Recently, Shaughnessy gave Imprint a preview of the limited-edition book, which can be pre-ordered from Unit, and took some time to answers our questions about Lubalin’s work, his sometimes prickly personality and the rampant misuse of his most famous typeface.

This the first Lubalin monograph in 27 years. The last one, published in 1985, has long been out of print. Why do you think there has been so much less interest in Lubalin than in some of his contemporaries?

There are a number of reasons why Herb Lubalin has been a somewhat neglected figure in comparison to, say, Paul Rand or Saul Bass, or some of his European near-contemporaries such as Wim Crouwel and Josef Müller-Brockmann. Lubalin didn't write much, and he had a slight air of anti-intellectualism. He didn't espouse modernism or the avant garde, favoring instead American vernacular styles, Spenserian scripts and a sort of hybrid modernism. And there’s no getting around the fact that his work looked old-fashioned when compared to the neo-modernists or the deconstructionists of the past two or three decades. But as I hope my book makes clear, these judgments are in nearly all cases wrong, or at least partially wrong.

Lubalin was no intellectual, but he was a highly intelligent and self-reflective individual. And what little writing he did showed that he had studied the modernist and avant garde movements closely. Although he wasn't a political radical, he was much more of a "political" designer than most people seem to realize — his work with Ralph Ginzburg on magazines such as Eros, Fact and Avant Garde put him at the heart of the '60s free-speech and anti-censorship movements.

Recently, there has been a sort of Lubalin revival, particularly among younger designers. Why do you think people are coming around to Lubalin's work now?

After a couple of decades of neo-modernism (the cult of Helvetica) and its opposite, deconstructionism (I'm thinking of Cranbrook and studios like Tomato), younger graphic designers looked around for fresh inspiration, and they discovered Lubalin. He offered a note of refinement and structure at a time when graphic design was either too rigid or over-reliant on glitches and a sort of anti-design randomness. But I think they were primarily attracted to his immaculate sense of craft and to his ability to make lettering “talk” — what Ellen Lupton has called his use of “textual image.”

I also think that his skill as a typeface designer fits in with the current fascination with type design. And I would add that the work done by the Lubalin Study Center at Cooper Union is pretty crucial to the recognition of Lubalin as a major figure in American graphic design.

Finally, I have a pet theory about why Lubalin is currently popular: In the eyes of many designers, he offers a way of designing — and of communicating — that doesn't require expensive art direction, over-manicured photography or grandiose presentation. Lubalin proved that to be effective, all you need is a typeface and a good idea. In other words, he is a designer for the age of austerity.

Lubalin's friends and colleagues remember him as an extremely quiet, taciturn man. Was it difficult to write a biographical investigation of a figure who was not given to much self-revelation, in public or in private?

There are lots of stories about Lubalin’s taciturn manner. I first learned about it when I interviewed some of the designers who had worked with him toward the end of his life. (He died in 1981.) People like Louise Fili, Mike Aron, Kevin Gatta, Lynda Decker and Jason Calfo. Initially, I found their descriptions of Lubalin’s famous grunting and monosyllabic utterances rather off-putting — they made him sound like an ogre. His best friend Lou Dorfsman recalled flying from New York to L.A. with him, and on the entire journey Lubalin never spoke a single word. Carl Fischer tells the story that Lubalin was “once berated for not saying good morning to everyone when he came into the office in the morning. Lubalin retorted that if he had to say good morning to every employee, he’d never get any work done.”

But in talking to his former protégés, it soon became clear that they loved the man and that his lack of words meant that when he did speak, it was like a ray of sunshine.

Regarding research, it was difficult at first, but thanks to a number of people who knew him intimately, I was able to build up a clear picture of the man. Here I must mention George Lois, Alan Peckolick, Carl Fischer, Seymour Chwast, Marilyn Hoffner, Al Greenberg, Bernie Zlotnick, Tony DiSpigna, Tom Carnase and Lubalin’s assistant from his advertising days, Fay Barrows. Also, his widow, Rhoda, and his son Peter were a great help. And, in fact, when I started to dig around, I discovered that Lubalin gave a lot of interviews and wrote a few concise and detailed articles. So writing about him wasn't as difficult as I thought it might be.

In your essay, you write that your own interest in Lubalin waned in the 1990s and that you came back to his work "hesitantly." How did researching this book change your opinion of Lubalin?

Lubalin was where I came into design. I trained in a big studio in London in the mid-1970s, and all the older designers that I relied on for help and instruction (I didn't go to design school) told me to look at Lubalin as the gold standard for graphic expression. Although I was greatly helped by Lubalin’s ethos of “expressive typography,” once I gained some confidence, I soon moved away from him to more radical voices — Dutch design, Cranbrook, Emigre, 8vo and others.

It was the prompting of my publishing partner, Tony Brook, that forced me to go back and look at Lubalin, and when I looked closely, I discovered that he wasn’t the conventional, cozy designer I remembered. Thanks to his work with Ralph Ginzburg, he was an early pioneer of the designer-as-author, and he was undoubtedly more “political” than most comparable graphic designers of his time. Plus, he always put quality of work before financial rewards. So I suppose you could say that I became reconverted to the Lubalin faith.

Lubalin is best known for his independent graphic design work, but he spent almost 20 years working in advertising before going out on his own in 1964. How did Lubalin's ad-man years shape his achievements as a graphic designer and typographer?

Yes, he was part of the original 1950s and ’60s Mad Men scene. Sudler & Hennessey, the agency he worked for from 1945 until ’64, is widely considered, along with Doyle Dane Bernbach, to be one the progenitors of the “new advertising.” And Lubalin was at the core of everything the agency did at that time.

By going into advertising, Lubalin was only doing what Saul Bass and Paul Rand had done before him — using it as a way of getting started. And while he had reservations about advertising — some ethical, some creative — he made good use of his time in ad land. It was there, under the enlightened, design-friendly regime at Sudler & Hennessey, that he perfected his ideas of expressive typography. The pharmaceutical press ads he did while at S&H allow us to plot his embryonic approach to “word pictures” and “conceptual typography” — two phrases that were later used to describe work from Lubalin’s post-advertising years.

Lubalin's partner Tony DiSpigna called Avant Garde Gothic "the most abused typeface in the world." Are you concerned that, by exposing a new generation to Lubalin's work, your book will encourage even more misuse?

This is a reference to the ligatures that Lubalin and Tom Carnase developed. Lubalin claimed that it was the first time a typeface offered cap ligatures. His friend Ed Benguiat said, “The only place Avant Garde looks good is in the words Avant Garde. Everybody ruins it. They lean the letters the wrong way.” This was a reference to the masthead of Avant Garde magazine, which was the starting point for the typeface. I am indebted to Steven Heller’s research into this fascinating episode in Lubalin’s life. Steve discovered the difficult road Lubalin traveled in order to design a suitable masthead for the magazine, as well as Tom Carnase’s subsequent development of the letterforms into an entire alphabet.

Personally, I think there’s a lot of nonsense talked about the ligatures. I love them, and I have no qualms about encouraging their “misuse.” Anyway, we see a lot of usage of Avant Garde, but I rarely see the ligatures used much. Perhaps today’s designers are too tasteful to use them badly?

What lessons do you think young designers should take away from Lubalin's career?

There is a great deal to be learned from Lubalin. First, he never stopped working. His son Peter gave me a terrific interview for the book, and he told me a story about being a kid and watching football on TV at home with his dad. At the end of a game, the floor would be covered with crumpled-up balls of layout paper. These were Lubalin’s famous “tissues” — sheets of paper on which he sketched his ideas for logos and layouts. He had been sketching throughout the game, and the balls of paper were rejected ideas. The pages that didn't get crumpled up were taken into the studio and worked up into finished art. So the first lesson is total dedication. After that, I’d say integrity. After his spell in advertising, Lubalin only ever did the work he wanted to do. Financial considerations never got in the way of a job he really wanted to do.

Finally, did you ever meet Lubalin? If so, are there any personal anecdotes you can share?

No, I never met him. He came to London often in the 1970s — he even had a rather mysterious London office that I haven’t managed to discover much about. He also had a Paris office and a Hawaiian studio! But I did speak to a few fellow Brits who met him on his U.K. visits, and they all found him delightful company. One thing I have discovered about him was that he was the most generous recruiter of talent. The British designer David Pocknell recalls going to see Lubalin in New York in the 1960s with a “Beatles haircut, a velvet suit and few posters,” and Lubalin offered him a job on the spot. It was the same with Alan Peckolick, who eventually became Lubalin’s partner — he was hired on the spot. It’s clear that — despite the grunts and his reluctance to say good morning when he entered the studio — Herb Lubalin was a kind man and a generous supporter of young talent.

.
For more on 20th century type design, check out the book Texts on Type: Critical Writings on Typography, available at MyDesignShop.com.