Is Pixar's "Brave" princess a lesbian?

Um, no -- she's a girl in a fairy tale. But a post suggesting a cryptic gay-pride message gets a huge response 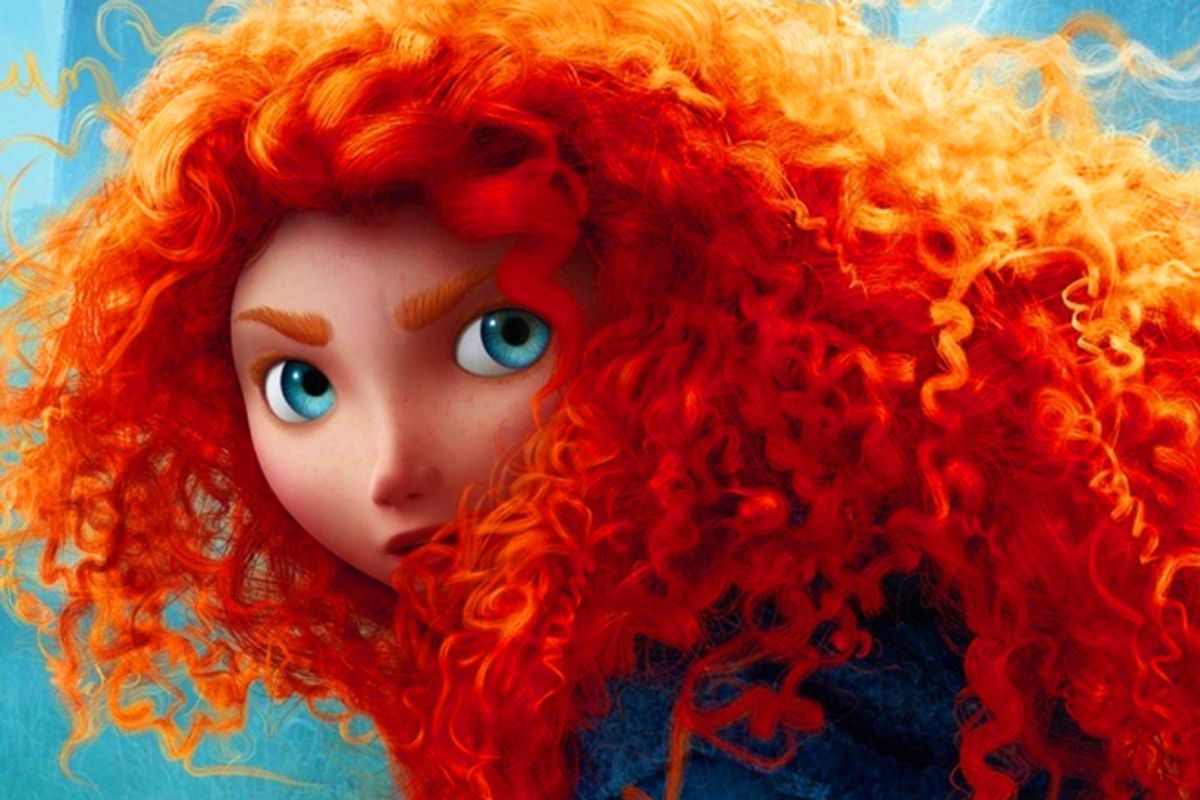 In the tradition of instant non-analysis of made-up issues -- the tradition that made the Internet the wonderful place it is! -- Adam Markovitz, of EW.com's PopWatch blog, put up a post over the weekend suggesting that the fiery Scottish princess Merida, heroine of Disney's new animated hit "Brave," might be a lesbian. (If you haven't seen "Brave," and you still want to -- well, hell, it's a free country, right? Keep on reading! A few spoilers won't kill ya!) It sort of goes like this: Merida is good at archery, she climbs rocks, she's kind of a tomboy type, and she doesn’t want to marry any of the three dimwit suitors for her hand. If she were a person in the real world -- which, I will hasten to add, she isn't -- and if her real world were a touch more modern and liberated than medieval Scotland (which was not exactly a gender-blur society), then sure, that girl might grow up to be gay. Or, on the other hand, she might not!

That's really all there is to say and, in fairness, Markovitz does not pretend that one can draw any conclusions about a Disney fairy-tale princess (one who, mysteriously, seems to have been named after a city in Mexico) when evidence is completely lacking. In fact he seems to draw all conclusions at once -- "Merida isn't an overtly lesbian character," but she "absolutely" could be gay -- before drawing none at all: "Ultimately it doesn't matter if Merida could be interpreted as gay." That's an impressive display of having and eating all the cake in the bakery, but if it doesn't matter, friendo, then we read your whole article because ... well, OK, I actually do understand the because.

Markovitz's post sparked intense debate and social-media activity for both honorable reasons and borderline-sleazy ones. On one hand, it's startling to be confronted by the fact that even in 2012, with same-sex marriage legal in many jurisdictions and gay men and lesbians serving openly in the military, LGBT people are still so starved for role models and friendly archetypes in mainstream Hollywood movies. On the other hand, Markovitz sneakily suggests -- without ever coming out and saying so -- that Disney/Pixar snuck their maybe-lesbian princess into the marketplace of ideas on Pride weekend as a sort of secret signal to the gay community.

Today, crowds will line the streets of cities like New York and San Francisco for parades that mark the high point of LGBT Pride Month. At the same time, legions of kids will swarm into theaters to watch Pixar’s "Brave," the animated story of a young Scottish princess named Merida who goes to extreme lengths to avoid having to marry one of the three noblemen that her parents have chosen for her. The two events don’t seem to have much in common at first glance.

Or do they?! Hmm? As pop-culture conspiracy theories go, I give this one about a B-plus. It isn't true, but it has its merits. Disney has long been known as a gay-friendly oasis in corporate America (although these days every other Hollywood studio, and many other large corporations, can match the Mouse on that front). Pixar, now a Disney subdivision, is based in the San Francisco Bay Area and has a reputation (possibly exaggerated) for encoding liberal social values and a smidgen of adult-oriented intellectual humor into its films. Add all that background, and a release date that coincided with the biggest Gay Pride parades in the country, to a rebellious redhead who handles a bow and arrow better than any boy, and you get -- well, you get the shifting ideal of girlhood circa 2012, that's what you get.

I don't believe that "Brave" co-directors Mark Andrews, Brenda Chapman and Steve Purcell, or the Pixar team, had any intention of creating a lesbian-coded heroine. Instead they created an autonomous, independent-minded and indeed pre-sexual or nonsexual character, whose principal relationship is with her mother. (Although Merida appears to be a teenager, the intended audience for the film is much younger.) But pop culture is a fluid marketplace, and if Merida's challenge to the traditional mode of femininity strikes a chord with viewers who've been fighting that fight their entire lives, then all you can say is more power to them, and there isn't a theater proprietor in the country who's likely to refuse them tickets. No one at Pixar will be dumb enough to say anything about this at all, most likely, except perhaps "Oh, gosh!" and "We welcome all points of view!"

There's a germ of something here, to be sure, even if it's completely unintentional. Merida strikes me as a younger-sister forerunner of Katniss Everdeen, the adolescent archer played by Jennifer Lawrence in "The Hunger Games." If anything, Katniss seems a more consciously lesbian-coded character than Merida (at least in her original form in Suzanne Collins' novels), with the crucial difference that she's not available as an LGBT icon because she's officially heterosexual. Who decided that bow-and-arrow proficiency was the standard for awesome girlness? I guess that was the Greeks, a few thousand years back, who used much the same cover story for Artemis, goddess of the hunt and a glaringly obvious precursor of both these characters. She was supposed to be straight too, although she was a virgin constantly surrounded by female attendants and known for killing guys who came after her. The only man she ever loved was Orion, her fellow hunter, whom she killed by accident (whoops!) and hung in the sky, where we can see him on summer nights when we're done arguing about the movies.