It felt like a football game as the guilty verdict arrived. We've made everything, awful or not, into spectacle 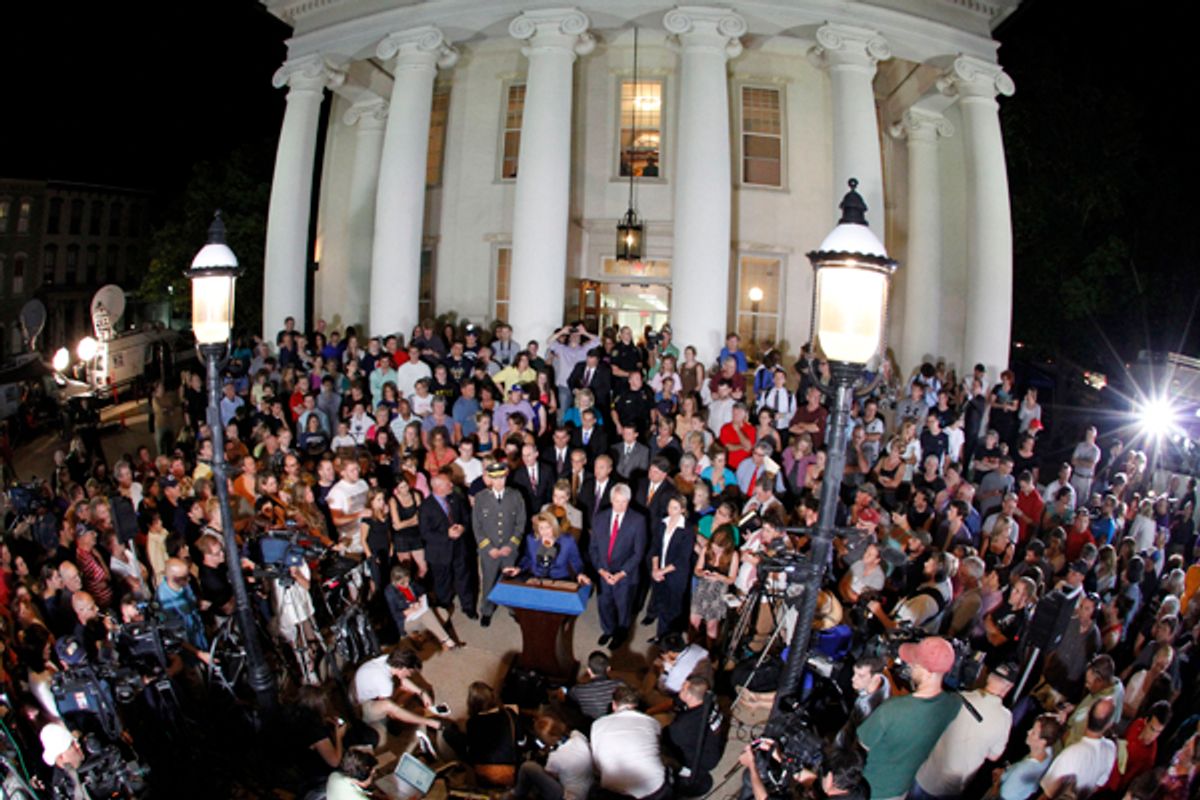 Late Friday night, the news started to spread that something was happening at a courthouse in Centre County, Penn. The Jerry Sandusky verdict was about to be delivered. Inside the courthouse, the courtroom was silent as Juror No. 4 read 45 guilty verdicts. It was a silent spectacle after an efficient, effective trial. The former Penn State coach, once seen as the heir to Joe Paterno, would likely spend the rest of his life behind bars for sexually abusing young men.

Outside the courthouse, however, there was a different kind of spectacle. A crowd had gathered. News crews and well-groomed newscasters stood at the ready beneath bright, shining Friday Night Lights. The proceedings had the air of a football game, a carnival, a celebration of … well, something. If the courtroom was quiet and respectful as the verdict was read, outside it was bedlam. An outsize cheer went up; the crowd roared. The Washington Post described it as an unmistakable sound: "It was the cheer you hear at a football game when a team scores the winning touchdown."

I know that sound well. It reminded me of my years spent living in Nebraska, both as a child and an adult. Nebraska is Husker country. There is God and there are the Huskers and sometimes their order of importance is, well, ambiguous. On game day, Memorial Stadium is the third largest city in Nebraska. Amen. Even though he has long retired as coach, a position he held for 25 years, Tom Osborne sits at the right hand of the Holy Father. He is the current athletic director at the University of Nebraska-Lincoln. He was handily elected to Congress as a Republican and served for six years. At the height of Nebraska football, during the 1990s, Nebraska won national championships in 1994 and 1995 and captured part of the championship in 1997. Osborne ascended somewhere above God. To Nebraskans, Tom Osborne is much like Joe Paterno is to the people of Penn State. Amen.

In the 1990s, the unnecessary roughness of many Nebraska players was fairly well known. Lawrence Phillips was probably the hottest mess on that team, always getting in trouble for one thing or another. His crimes, more than once, involved violence against women; he was such a fine running back, however, and mattered more than the woman’s face he threatened to break. In those years, Nebraska players were arrested so often it was as if criminality had become a second letter sport. When the media would halfheartedly question Osborne about these “thugs,” he’d talk about how he was able to see the good in flawed men. More often than not, his players were forgiven for drug and alcohol infractions and assault and rape allegations because they could move the football down the field. They could fill Memorial Stadium week after week. They could take our team to the championship game, over and over. They could take us to church. Amen.

Nebraska, like Penn State, certainly was not unique. College and professional athletes get away with all kinds of criminal behavior. As a society we must be comfortable with that behavior because, week in and week out, we tune in to the spectacle of football games, baseball games, basketball games and hockey games that showcase broken men carrying the hopes of millions of fans on their backs. We cheer and buy jerseys and make rich men — or soon-to-be-rich men — richer. We’re outraged about Penn State, and rightly so, but there’s plenty more to be outraged about where athletes, coaches, criminality and silence are concerned. We live in a culture where athletes are revered and where overlooking terrible, criminal behavior is the price we are seemingly willing to pay for our reverence. Amen.

This isn’t really about sports, though. It is about spectacle, and what happens when we demand front row seats. In Nebraska, the stories about players off the field received as much, if not more, attention as their exploits on the field. The anticipation was breathless. What will those boys do next? How will this affect our chances? In Happy Valley, a man has been convicted of committing terrible crimes -- and a great many more men stand accused of enabling his misdeeds, all for the sake of the spectacle. How did this happen? How will it affect our chances? And which spectacle do we prefer, the athletic contest or the awful real-life spectacle that unfolds on cable news, which allows us to attend a Friday night verdict in the public square.

Jerry Sandusky did not testify in his own defense. But we had front row seats to his spectacle when Sandusky was interviewed by Bob Costas on "Rock Center" at the end of 2011. There’s a certain crassness to an alleged pedophile being allowed to defend himself on national television. While our justice system is predicated upon the notion of the presumption of innocence until the establishment of guilt, there should be limits to what a highly visible figure can do to establish that innocence outside of the court of law. There are no limits, though, not really.

Like most people, I gather what legal knowledge I have from a show called "Law & Order." My grasp on most legal concepts is tenuous at best. I do know that on "Law & Order," most defense attorneys strongly discourage their clients from taking the stand in their own defense. They also discourage clients from talking to the media. Innocent or guilty, it is too easy for accused criminals to incriminate themselves when their words are not managed and mediated by someone else. With the hellstorm surrounding Jerry Sandusky, you have to wonder what kind of attorney would let that man talk to the media.

In the interview, Sandusky sounded like a broken, broken man. If he is guilty of the crimes he has been convicted of, and yes, I surely do believe he is guilty, Sandusky has been a broken man for a very long time. In that interview, he chose to reveal the ways in which he is broken, laid himself bare, however unintentionally.

Or, perhaps, he sounded so desperately broken because he got caught, because he no longer has unfettered access to young boys and an elite athletic program. I imagine the loss of that lifestyle must be quite a blow. You never can tell what it takes to break a man down.

Now, Jerry Sandusky has been convicted after an incredibly speedy trial. The spectacle continues. We’re seeing just how broken he really is and how he has, in turn, broken far too many others. The details that came out of that Pennsylvania courtroom are as repulsive as they are heartbreaking. There might be some small measure of justice for the victims; it’s too soon to tell. Sandusky will go to prison. His victims will be compensated. They will heal. We can hope. The damage, though, has been done and it cannot be undone. Penn State will rebuild itself. A new football season will start in Happy Valley and a new season will start in Lincoln and in college towns all across the country, casting a wholesome veneer over some ugly truths. Young men will break their bodies against one another while we cheer them on. Off the field, who knows what those young men will do. We will forget about Jerry Sandusky and his victims, whom we have barely acknowledged at all, even if we don’t mean to. This is how it goes. There’s always some new fracture in humanity to focus on.

We live in a culture of entitlement. This is particularly true when it comes to knowledge. We feel entitled to know everything and see everything. The Internet is partly to blame. This is the age of WikiLeaks and the rabid righteousness of Julian Assange’s quest for the truth, for his right, for the world’s right to know about the war and sensitive military and government secrets. He frames the truth as immutable and singular and as the most overriding concern. His zeal begs the question, What do we have the right to know? How much of the spectacle do we have the right to see?

On June 9, a father in central Texas found a broken man sexually abusing his daughter. The father allegedly beat that man to death, broke him so bad there was no coming back from it. Justice, in this case, was swift and applied brutally. Many are calling him a hero. Many of us would do the same thing, would get caught in a moment of blind fury in the face of such a violation. That father says he feels remorse. He wasn’t trying to kill a man. He was trying to save his daughter and he did, or, at least, he saved what he could. A grand jury chose not to indict him. He won’t be prosecuted. The media, though, is covering this story intently, excavating it from every angle because broken men are everywhere — on ranches in central Texas, in elite football programs, both on the field and on the sidelines, in courtrooms. There’s no escaping them or the reach of their damage. It’s a spectacle in every way.

The National Enquirer publishes photos of Whitney Houston’s corpse in her casket. On YouTube, there is footage of Saddam Hussein’s execution. Over at the popular blog Jezebel, there is a post about a video of a foreign journalist being raped in Libya. The video was taken down from YouTube, but not before the post’s author got screen caps. As you might expect, the comments on that post were almost unilaterally full of rage and condemnation. The most vocal objections concerned the lack of consent on the victim’s part to have her body and violation displayed in such a public manner. Her face was obscured but did that protect her identity or her privacy? Since the post first went up, the site has pixelated the images with an editor’s note that says, “This post is ultimately about the existence of a video, thus the images ARE the story — without them, there's nothing.”

The pictures are the story. The videos are the story. The confession of a broken man is the story. The protective father is the story. We want the story. We want to know every little thing about it. We want to attend the verdict and we want to cheer. Without the spectacle, there is nothing. There was a time when atrocities took place and unless they were personal, the public was shielded. The terrible world was out there, but it wasn’t. Now the world is smaller than it has ever been and every moment can be captured by a camera, transmitted to hundreds or thousands or millions of people -- and the media revels in this for Nielsen ratings and page views and advertising dollars.

The dilemma with Medusa is that you know you shouldn’t look at her but you are compelled anyway, to see if her countenance is as unfortunate as mythic lore tells us, to see if you will truly turn to stone if you look upon her face. We know the Medusa is dangerous but we still want to know. We still want to see the spectacle of her. Before long, we might all turn to stone.