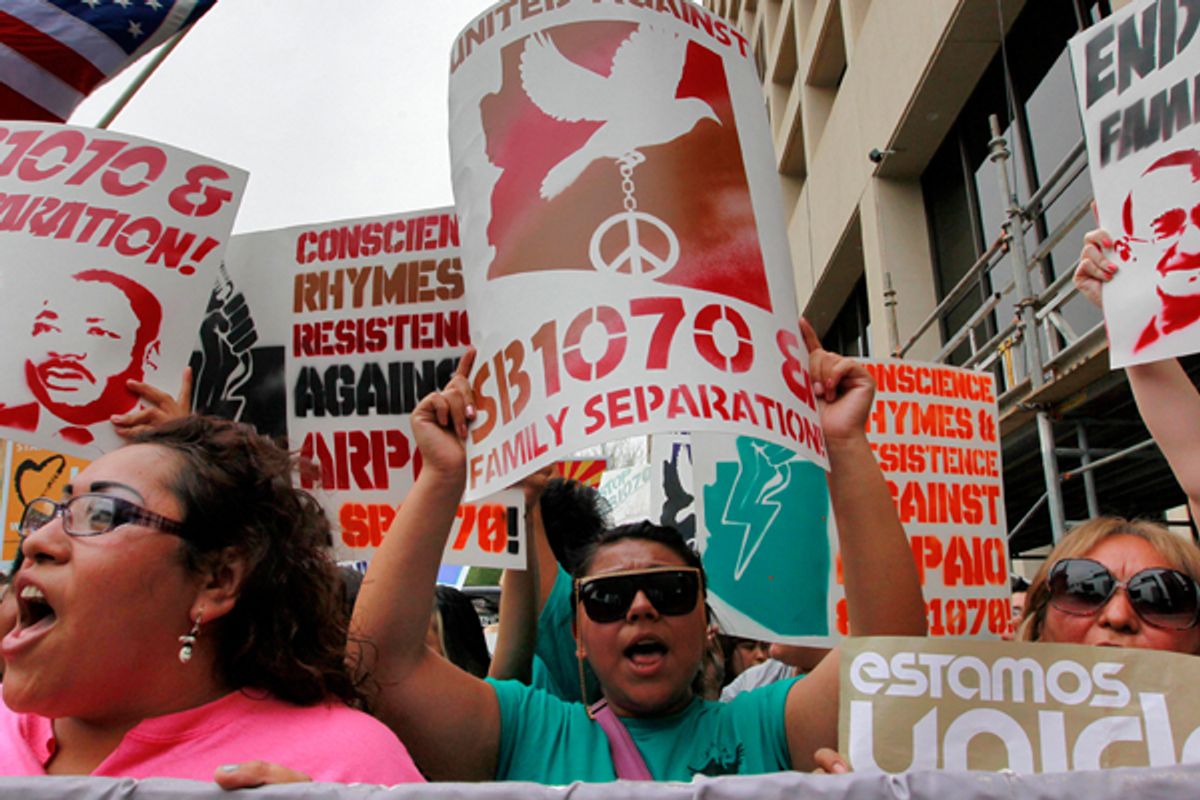 The Supreme Court ruling to uphold a key provision in Arizona's SB 1070 immigration law may send out a last shred of hope to "attrition through enforcement" Republican candidates like Mitt Romney and other states' rights champions to unbuckle their own immigration policies. Some states couldn't even wait -- roughly 2,500 miles from the U.S.-Mexico border, the New Hampshire state Legislature passed a resolution in support of Arizona's "papers please" law only days after the Supreme Court heard opening arguments in April.

That's only one side of the story. Two years since SB 1070 immortalized Arizona as the nation's Tea Party bellwether of punitive measures for undocumented immigrants, a newly empowered civil rights movement has emerged in the frontier state -- and the nation -- that will have a far-reaching impact on local, state and national politics, as well as on public interest efforts to hold law enforcement agencies accountable. In a line: No less auspicious than the powerful effect of President Obama's Dream Act-deferred mandate for undocumented youth last week, the Supreme Court's decision to strike down three of the four provisions in  SB 1070 will electrify a social media-savvy new generation's resolve to make immigration reform and civil rights a litmus test in the 2012 elections and beyond.

“What happens in Arizona spreads,” Phoenix-based Puente director Carlos Garcia told me this spring. “The state is both a laboratory for the far right as well as an incubator of this generation’s vibrant human rights movement."

The spring of 2010 was a different story. For close observers in Arizona, Gov. Jan Brewer hitched her flagging gubernatorial campaign to SB 1070  when the tragic murder of a Cochise County rancher on the U.S.-Mexico border blindsided the state, and allowed the self-proclaimed "Tea Party President" Russell Pearce to unleash the hounds of his longtime anti-immigrant fervor. Warning that Americans had already lost "our language" and "our history" to an "invasion" from Mexico, Pearce rammed through his long-awaited punitive SB 1070 legislation in weeks. Brewer cast herself into the national immigration debate with her fanciful details of beheadings, drug mules and "terrorist" assaults on her state. Her ratings soared; she coasted to an easy victory in the fall. “As I write, I have almost 500,000 friends on Facebook,” Brewer crowed in her bestselling chronicle, "Scorpions for Breakfast."

While Arizona may have become the "meth lab of democracy," as "The Daily Show" lampooned, Arizona Democrats essentially walked out of the room when the fight broke out. There were exceptions, of course, such as House Progressive Caucus leader Raul Grijalva.  But the old guard of the state Democratic Party failed to “rise to the challenge,” Citizens for a Better Arizona co-founder Randy Parraz told me in the aftermath of the 2010 elections.  "They saw it [SB 1070] as a burden and walked away. I said, ‘Hey, let’s use this as an opportunity to organize.’ There were a lot of good people in the state who stayed quiet.”  The Democrats lost every statewide election.

What a difference two years make. Welcome to Arizona Libre.

In one of the most important political stories overlooked by the major media outlets, Parraz and his bipartisan alliance of young Latinos, retiring baby boomers and moderate Republicans fed up with the hate-filled rhetoric managed to pull off an astonishing recall election of SB 1070 architect and once invincible Russell Pearce last fall. Taking their accountability campaign one step further, the Citizens for a Better Arizona and other advocates now have the notorious Maricopa County Sheriff Joe Arpaio, the frontier face of SB 1070 enforcement, on the ropes. Facing a crushing Department of Justice civil rights violation suit, as well as a long-awaited racial profiling suit next month, and a serious 2012 election challenger for the first time in his 20-year reign as the Tent City sheriff, Arpaio will soon join Pearce at the Tea Party retirement home. Thousands rallying reminded him of this at an unprecedented protest on Saturday.

Unafraid of the political ramifications of SB 1070, mainstream Arizona Democrats are now watching the example of newcomer Richard Carmona, the former surgeon general under George W. Bush, who is waging a campaign to become the state's first Latino in the U.S. Senate and shift Arizona away from its "malicious" policies. Carmona understands the demographic shift at play. So do a growing number of younger and progressive candidates now willing to openly confront any hedging by the Democratic Party leadership.

In a sign of the times to come, Arizona Dream Act Coalition co-founder Dulce Matuz nudged Gov. Jan Brewer from Time magazine's top 100 list of the most influential people in the world. Earlier this spring, Time showed that Latino voting ranks had grown in every one of the key swing states, reminding its readership that 50,000 new Latino voters came of age every month.

In truth, with immigration and crime rates at their lowest since 1970, SB 1070 has never been about immigration reform or border security; hoodwinked by the driving force of Pearce's ardent states' rights beliefs, Brewer fell into her role as the figurehead of Arizona's political power play with the feds. Pearce is ancient history now. An engineer trained by Arizona State University, Matuz and her remarkably organized and fearless ranks have taught the rest of Arizona that SB 1070 is not a prologue for future legislative efforts, but the last chapter in a state tragedy that will inevitably be overturned in full -- probably in the 2014 gubernatorial race.

These newly invigorated ranks, though, are taking their campaigns beyond the voting booth. A web of lawsuits over racial profiling and civil rights violations, led by the ACLU and other nonprofit organizations, will most likely tether SB 1070 to the dock before it even has the chance to set sail. Meanwhile, the 2010 protests against SB 1070 "gave birth to a model of organizing we call Barrio Defense Committees," Garcia recently declared, "where neighbors link with neighbors to learn their rights and make collective plans to defend themselves. CDBs exist all over the city of Phoenix and the model has spread to Tennessee, Georgia, Alabama and other states. With the law enforcement we have, it's less about knowing your rights and more about knowing how to defend them. The committees are the building block of our organizing and mobilization."

Call it a chronicle of a mobilization foretold in Arizona. Nearly three decades ago, Arizona native Cesar Chavez addressed the Commonweath Club in San Francisco with a prophetic vision: “Like the other immigrant groups, the day will come when we win the economic and political rewards which are in keeping with our numbers in society. The day will come when the politicians do the right thing by our people out of political necessity and not out of charity or idealism. That day may not come this year. That day may not come during this decade. But it will come, someday!”

With the Supreme Court's mixed decision on SB 1070 today, that day is now in Arizona, and across the United States.