Don't worry, even if the Supreme Court strikes down Obamacare, we're still destroying the planet 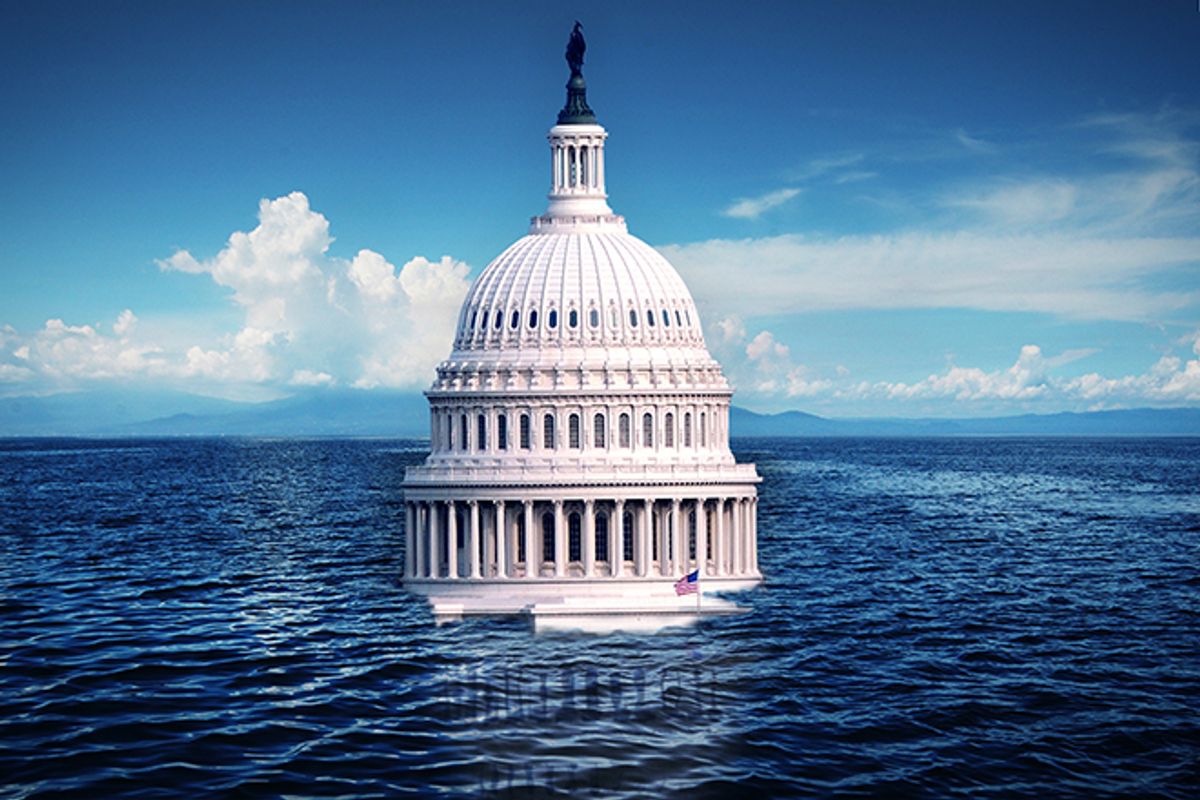 Cheer up! Even if the Supreme Court strikes down the ACA and in doing so essentially invalidates almost the entirety of the post-New Deal welfare state, we can take solace in the fact that the blatant partisanship of the Roberts court will be a mere footnote in the future history of how we allowed our entire planet to be irreparably damaged. Sure, it's infuriating that a simple majority of ideologically conservative justices with lifetime appointments are abusing the extra-constitutional power of judicial review to advance partisan Republican policy goals, but on the other hand, soon Washington, D.C., will be much more underwater than it currently is.

The U.S. Geological Survey says sea levels from North Carolina up to Boston have risen 2-3.7 millimeters per year since 1990, a rate higher than the global average. And "if global temperatures continue to rise" -- which they will, definitely! -- sea levels along the Atlantic coast (where a lot of America's favorite stuff is) will continue to increase at a rate higher than those of much of the rest of the world.

Washington being washed away into the ocean is, of course, a result that would please both liberal critics of conservative judicial activism and conservative critics of federal overreach, but obviously the rising sea levels will likely drown Baltimore (and Norfolk, Va.) well before they affect Washington.

Heat waves and freak weather events are almost definitely going to continue happening with greater frequency across the U.S. and the world, regardless of the majority's opinion of the scope of the Commerce or Supremacy Clauses. Even if, against the odds, the Roberts court manages to uphold the ACA, or even to find the individual mandate unconstitutional while preserving the rest of the bill's reforms and subsidies, there is still a pretty good chance that the country and the world will face mass droughts, floods, famine and extinctions as this century draws to a close. With the global average temperature already .8 degrees Celsius above preindustrial levels, it is exceedingly unlikely that humanity will manage to keep the planet from warming by less than 2 degrees, which most scientists predict would be fairly disastrous for many people, even if Antonin Scalia writes a very strongly worded dissent to their models.

If carbon emissions continue rising at the current rate -- a possibility many scientists refuse to countenance because they incorrectly believe the world to be ruled by sensible people -- it will basically mean the end of the civilization, with 6 degrees Celsius of warming by 2100, at which point most of the animals will probably die and there will be no food. Not even government-mandated broccoli, lol!

Also, we might be reaching a "tipping point" in the Earth's entire biosphere, as mankind is "rapidly changing local species compositions and ecosystem functions, causing small-scale changes that could combine and cascade into planet-wide shifts." Warming and other climate change-fueled disruptions can become self-reinforcing -- to take one example, plants subjected to one hotter than average season absorb much less carbon dioxide over the following two years -- and at a certain point the warming will lead to more warming no matter how much we "adapt." Unless greenhouse gas emissions peak really soon and then steeply drop off, we'll likely reach that apocalyptic point of no return sometime around when John Roberts dies of old age while waiting for a white Republican president to appoint his successor.

With various world leaders pointedly not making the trip to Rio to attend the 20-year reunion of a worldwide summit that did nothing to halt the growth of greenhouse gases or the threatened destruction of much of the planet's biodiversity, it is more apparent than ever that no one in a position to do anything to ameliorate climate change has much interest in doing so. (Maybe we should rename "climate change" "the deficit"?) So no matter which way the court ends up ruling this week, no matter how craven or blatantly partisan the court's conservatives act, it is pretty likely that we are all screwed in the long term regardless.