We get it, Grandpa, you're hip to Springsteen

Rich old conservatives love The Boss and they really, really want everyone to know it 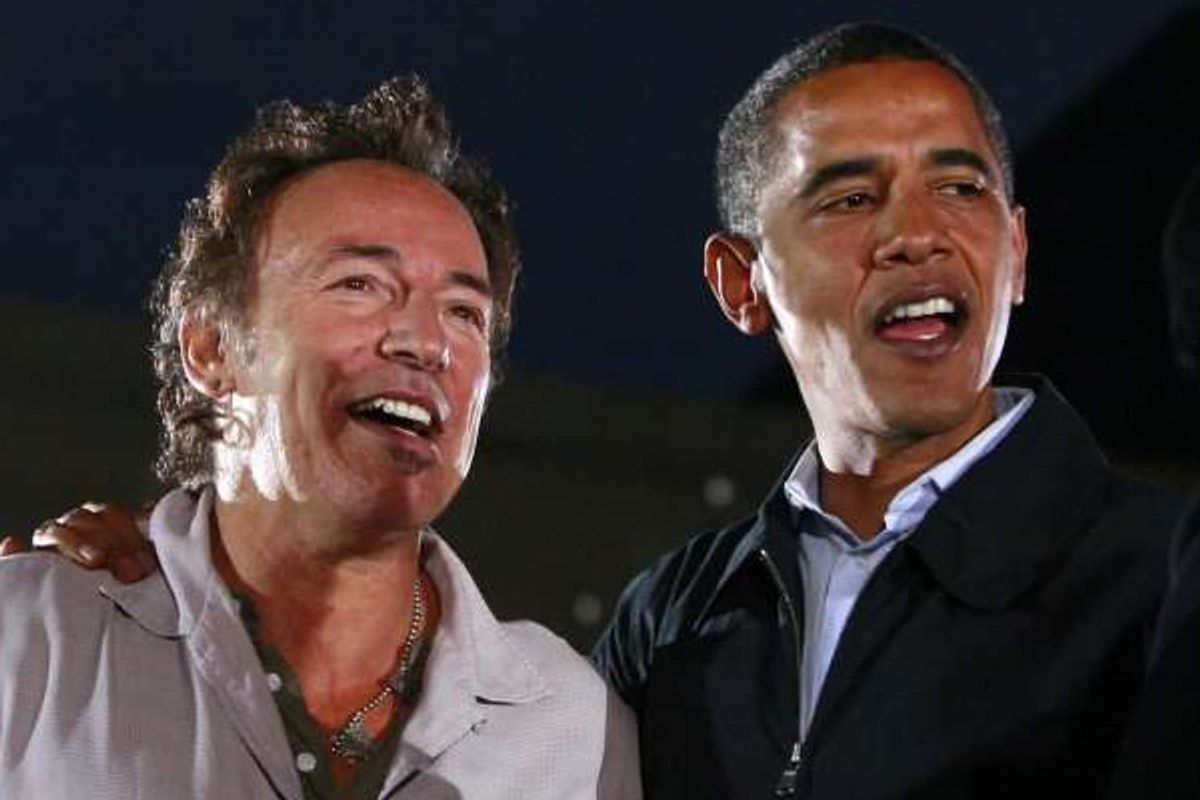 Good lord, give it a rest, boomer political pundits of America. We know you like Bruce Springsteen -- everyone does, he's one of the most popular and successful musicians in the history of popular music -- and we don't care that you went to his show last week or whenever. We don't! No one does!

I love Bruce. I think his best album is probably "Tunnel of Love" though I listen to "Born in the USA" more. I am seeing him at New Giants Stadium in September. There, isn't that boring? Like boring but also trying too hard and oddly boastful? Don't you just ... not care, that I like Bruce Springsteen? That is how America feels about you, David Brooks and Jeffrey Goldberg and Heritage Foundation assistant director of strategic communications Mike Brownfield.

People who live in the D.C. area and work in or write about politics for a living are among the least cool people on the planet, be they old or young, so it is always hugely embarrassing when they attempt to write about the bits of popular culture that they enjoy. It is already embarrassing enough when professional music writers go weak-in-the-knees for The Boss, as evidenced by everything Rolling Stone has published on the man for 35 years or so, but it is so much sillier when khaki'd old Ivy League grad suburban Maryland mega-mansion-owners get real about their magical, personal connection to a man whose career is in part a celebration of the exact opposite of them. (Is it the old guy version of the young white liberal blogger/pundit's fixation on "The Wire"? No, but both things are tiresome.)

And so we learn today from Mr. Brooks that "they say" (who?) "you've never really seen a Bruce Springsteen concert until you've seen one in Europe," and then he tells us the story of how he and his friends went around Europe spending hundreds of dollars on tickets to Springsteen shows in Spain and France and they enjoyed themselves very much. The success of Springsteen is, apparently, some sort of object lesson in staying true to your (geographical?) roots, and not being too "eclectic," or something, who the fuck knows. The column literally has this line in it: "Did it occur to them at that moment that, in fact, they were not born in the U.S.A.?" I don't know, David, do Clash fans realize that London is not actually calling them?

Brooks' "best theory" to explain the popularity of a man who's been an international musical superstar for years is some bullshit piece of pop child psychology he probably wrote down in a little Mead notebook he carries around that says "bullshit pop psychology terms to drop into future columns" on the front. Also Brooks' entire story of how Bruce's success is rooted in his deep connection to his original roots and milieu completely ignores the stylistic eclecticism that has defined his career since fucking "Nebraska" (an album that is not named "New Jersey, Where I Am From") but whatever. Whatever, David. No one cares that you like Bruce Springsteen.

Brooks has been advertising his special understanding of The Boss for years -- in 2009 he wrote of how his first exposure to Springsteen, in 1975, marked the start of his "second eduction," of the "emotional" variety. Springsteen's actual influence on Brooks' life and work remains something of a mystery, though Brooks claimed these anthemic tales of life's losers shaped "the unconscious categories through which I perceive events." I guess we'll take your word for it, David. ("What could be less like a Bruce Springsteen song than a David Brooks column?" Roy Edroso asked at the time.)

At least when George Will attempted to appropriate Springsteen for the Reagan era, he came at the songwriter in a faux-naif "I have never listened to this rock and roll music" style. From his classic 1984 column, soon to be disastrously referenced by President Reagan himself, in which Will attends his first Springsteen show:

I have not got a clue about Springsteen's politics, if any, but flags get waved at his concerts while he sings songs about hard times. He is no whiner, and the recitation of closed factories and other problems always seems punctuated by a grand, cheerful affirmation: "Born in the U.S.A.!"

His songs, and the engaging homilies with which he introduces them, tell listeners to "downsize" their expectations -- his phrase, borrowed from the auto industry, naturally.

It is music for saying good-bye to Peter Pan: Life is real, life is earnest, life is a lot of work, but . . .

Hmm yes, a grand and cheerful affirmation indeed. "The government that sent me off to kill for a lie has now left me jobless, lost and despondent but on the plus side, America rules, SYNTH SOLO!!"

But you know what the real tragedy is? That Springsteen won't make nice with New Jersey Gov. Chris Christie, one of his biggest and most repellent fans. Christie, a loudmouth bully whose most successful political maneuver is shouting rudely at lesser people for the benefit of cameras, went to a Springsteen show with, good god, Atlantic humorist Jeffrey Goldberg, and while he repeatedly declares himself a huge fan of the man, he also calls him a "limousine liberal" and mocks his political beliefs. (Also Jeff Goldberg thinks Bruce might be "a hypocrite" because he caught him staying at the Four Seasons once and we all know it's "hypocritical" to be rich and concerned about the plight of the poor, at least if you have a weird rich pundit's understanding of hypocrisy.)

But, Chris Christie, you are not actually the world's biggest Bruce Springsteen fan, and you are something of a jerk so it basically makes sense that the (actually somewhat shy and retiring) Springsteen doesn't want to grab a beer and shoot the shit with you, because, like everyone else in the world, he does not care that you like Bruce Springsteen. No one does.