Housing bounces back, at last

The next commander in chief will get a big fat inauguration present: A real estate sector that isn't moribund 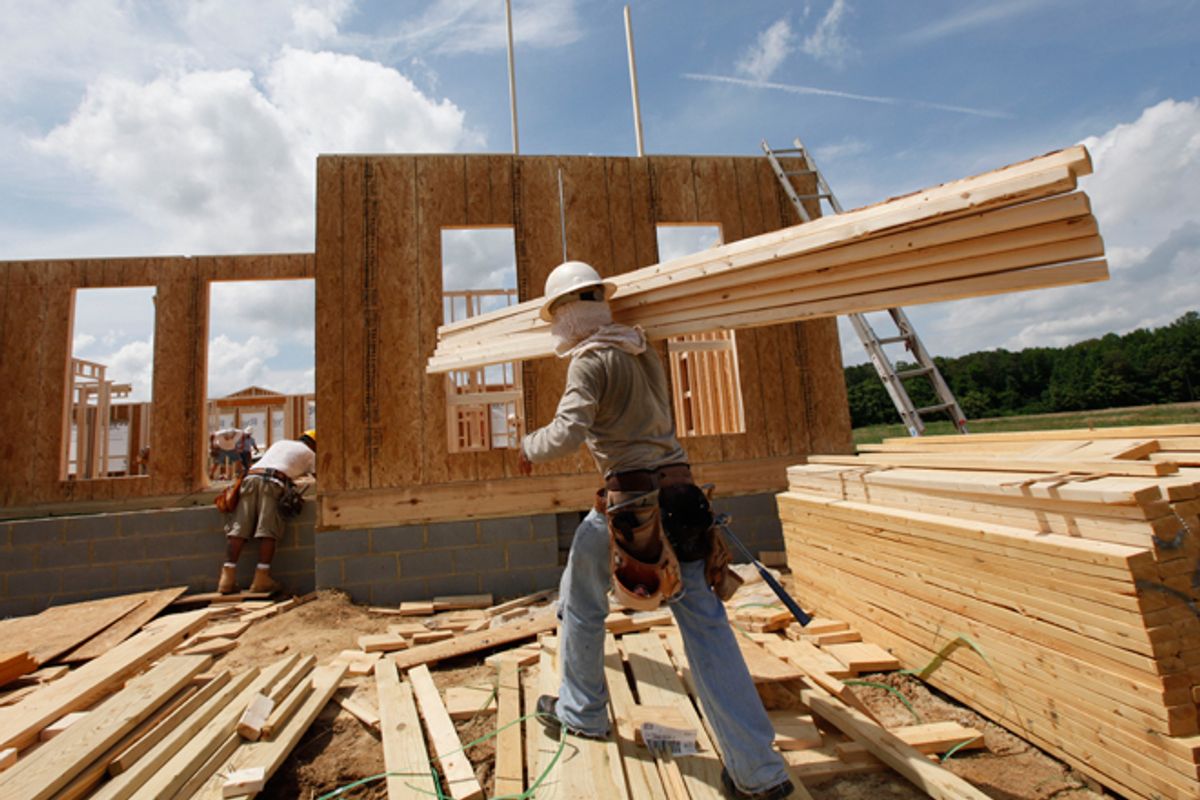 If we take housing prices as our benchmark, it's been six years since the peak of the housing bubble. A lot's happened since early 2006 -- a globe-spanning financial crash, horrible recession, historic presidential election -- but through it all, there's been one constant: the U.S. housing market has been in a coma. Worse than a coma, actually, if you take into account the debilitating impact of millions of foreclosures and collapsing home prices. The damage that the collapse of the U.S. housing sector has wrought on the average American's economic livelihood has been immense, possibly the single greatest factor oppressing American confidence and contributing to political unhappiness.

How's that for some context with which to view three successive reasonably encouraging reports from the housing front this week? On Monday, the Census Department reported that new home sales had risen significantly in May -- up 7.6 percent from April and an impressive 19.8 percent from May 2011. On Tuesday, the influential Case-Schiller index reported that average home prices had climbed in April -- the first tick upward after seven consecutive monthly declines. And finally, on Wednesday, the National Association of Realtors reported that pending home sales in May were up 5.9 percent over April and 13.3 percent over May 2011.

This is all good news, pretty clear evidence that the housing sector has not only bottomed out, but has at long last started to get its legs under it and move forward.

That does not mean, however, that a new boom is under way, or that the economy will suddenly lurch into speedy growth. The best bet is that the housing recovery is going to be painfully slow for a long time, and there may well be some backsliding as homeowners who have stayed out of a depressed market start putting up their homes for sale and flooding the sector with new inventory.

But what it does mean is that whoever wins the presidential election in November will come into office facing an economic climate that will be substantially different from what Obama had to deal with for almost the entirety of his term. A gale force headwind will be missing. Instead of sucking the entire U.S. economy into a black hole, housing will actually be contributing to economic growth. If Romney wins, he'll be one lucky ducky. If Obama holds on, he might actually get the breathing space to focus on moving the country forward, rather than scrambling to hold things together in the face of overpowering collapse.

Of course, there are plenty of other things to worry about that could stifle economic growth and make the next four years a downer for whoever occupies the Oval Office. But housing is a big, big chunk of the U.S. economy, and for now, it is on the mend.