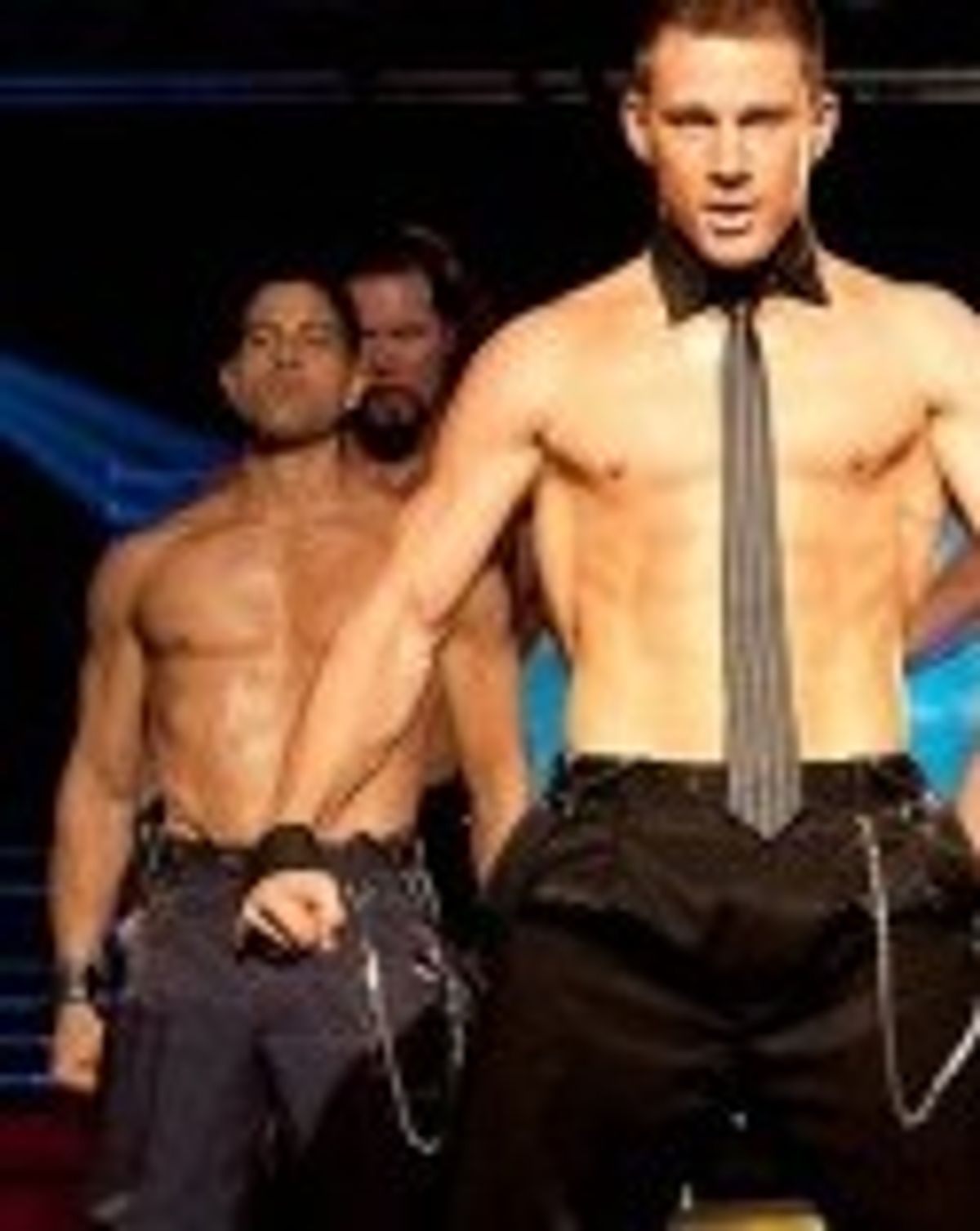 Count on Steven Soderbergh to turn a raunchy saga of ultra-beefcake male strippers and the women who love them into something unexpected -- in this case, into what may be the warmest and most romantic movie of his career. Now, as those who are familiar with Soderbergh's work over the last 23 years and 30 or so films will attest, praising him for warmth and romance is a little like proclaiming the nicest day of the year in Antarctica. Clear back to his era-defining indie hit "Sex, Lies, and Videotape" in 1989, this is a director obsessed with surfaces and reflections, with voyeurism and narcissism, with the way that human sexuality and the human body, once understood as realms of private experience, have become commodities.

"Magic Mike," which was reportedly inspired by the real-life teen stripping career of good-natured star Channing Tatum (who also co-produced the movie), fits almost too perfectly into the Soderbergh catalogue. It's close to being a gender-reversed, more audience-friendly remake of "The Girlfriend Experience," his little-seen 2009 indie featuring porn star Sasha Grey as a high-end hooker. There are indeed plenty of strip-club dance numbers -- in which Tatum proves suspiciously adept at the cheesed-out, pseudo-hip-hop choreography -- and Matthew McConaughey gives a scene-stealing, award-worthy performance as the unctuous, perm-wearing club owner and dance coach. (I know I'm not alone in pronouncing that I'm enjoying McConaughey much more the second time around.) But "Magic Mike" is a more abstract and self-consciously artistic view of the male-stripper subculture than the marketing campaign suggests, and opening-weekend audiences eager for cheerful nastiness may find themselves baffled.

Magic Mike is the all-conquering, lady-killing stage persona of Tatum's character, a cheerful 30ish bon vivant who pays the bills as the lead attraction in the Cock-Rocking Kings of Tampa, at least when he's not working construction jobs or trying to launch his dream business as a custom furniture craftsman. Mike is struggling to grow up, a bit haplessly, and Tatum captures that struggle with wonderful casualness: He puts on spectacles and a suit during a failed effort to get a bank loan -- it appears the female bank officer has seen him wearing much less -- and holds out hope that his occasional three-ways with a slumming psychology student (Olivia Munn) might turn into a real relationship.

McConaughey's oily but earnest Dallas, who has offered Mike a piece of the action when and if the club relocates to a beachfront venue in Miami, seems to represent Mike's possible future. His past, on the other hand, can be glimpsed in Adam, aka "The Kid" (Alex Pettyfer), a washed-out college football prospect Mike recruits on a job site. In many ways the strongest element of "Magic Mike" is its offhand social portrait of the working-class strugglers and strivers and hard-partiers of the Gulf Coast, with its crappy, overbuilt real estate and its mortgaged-up visions of glitz and glamour. Not many American filmmakers would show that landscape honestly, and fewer still would grasp that in that environment a strip club is less like a tawdry escape fantasy than an exaggerated version of reality.

I think the key scene in "Magic Mike," both thematically and emotionally, arrives when Adam's sister Brooke (Cody Horn, of TV's "Rescue Me") comes down to the club to find out what her feckless kid brother is up to. She stands in the back, an apparently detached observer, watching Mike's dance number and the ravening horde of women stuffing bills into his codpiece, and for most of the scene the camera is on her, not on them. (As is customary, Soderbergh shot and edited the movie himself.) She watches but does not participate -- always a position of power in Soderbergh's universe, and in ours too -- and as she tells Mike a few scenes later, during a tentative, getting-to-know-you beachfront stroll, "I get it -- the way you were dancing, the way the women were responding to you. I get it." She gets what, exactly? Well, not to go all Zen on you, but the kind of transcendence people yearn for in the atheist-capitalist visions of Steven Soderbergh isn't easy to put into words.

Even though the slow-burning romantic-comedy attraction between Mike and Brooke is only one of several plot lines in "Magic Mike," it's the soul of the movie, much more so than the dance scenes where Tatum slams his leather-clad groin into the face of some screaming extra playing a Navy wife gone wild. Each of them yearns for what seems authentic in the other: As suspicious as she is of the Magic Mike persona, Brooke is drawn to Mike as a vastly sexier and more genuine guy than her douchebag business-school boyfriend (a cameo role for screenwriter Reid Carolin), while Mike sees her as a pathway out of the alienated night-world of shared girls and shared drugs and endless parties. I have two things to say here about Cody Horn, a relative unknown, and the first of them is that she's very good, playing Brooke as a wry, independent, no-bullshit type watching her beloved brother slip into a downward spiral. The second thing is that her dad, Alan Horn, is the former president of Warner Bros., which is distributing this film. (The senior Horn now works at Disney.) All of that leads to thing 2-A, that Soderbergh is no dummy when it comes to the movie biz.

If there's a problem in "Magic Mike" it's that Soderbergh is drawn much more strongly to his bleak but beautiful Fellini-does-Tampa visions, and to McConaughey and Pettyfer's supporting characters and their world, than to the off-center love story. Viewed as a fast-rising star until his career was derailed by allegations of bad behavior, Pettyfer gives a tremendous, vulnerable performance here as an innocent all too easily seduced by his new life. Adam's puppy-dog affection for Mike is way too intense, and the latter can't return it; he's been around the strip clubs of Tampa a bit too long to take that kind of friendship seriously. But Adam is still an idealist, if a doomed one; at the other end of the spectrum lies McConaughey's Dallas, who believes only in salesmanship and has lost any capacity to reflect on the fact that the things he wants aren't worth having.

It's no accident that Soderbergh has made both a two-part, four-and-a-half-hour film about Che Guevara and an all-star trilogy of studio pictures about criminals who take down Las Vegas casinos. He's the most devoted anti-capitalist in American cinema, and whether he's taking on strippers or hookers or a worldwide flu epidemic or the international drug trade, you have to see his work in that context. I think "Magic Mike" is a fascinating film, one of his best in recent years. But it isn't quite as much randy, escapist fun as it looks like on the surface. That's because Soderbergh fears there is no escape for Magic Mike, or any of us, from the permanent Tampa strip club of the mind, where we sit inhaling Buffalo wings and making it rain all over the latest naked offering.