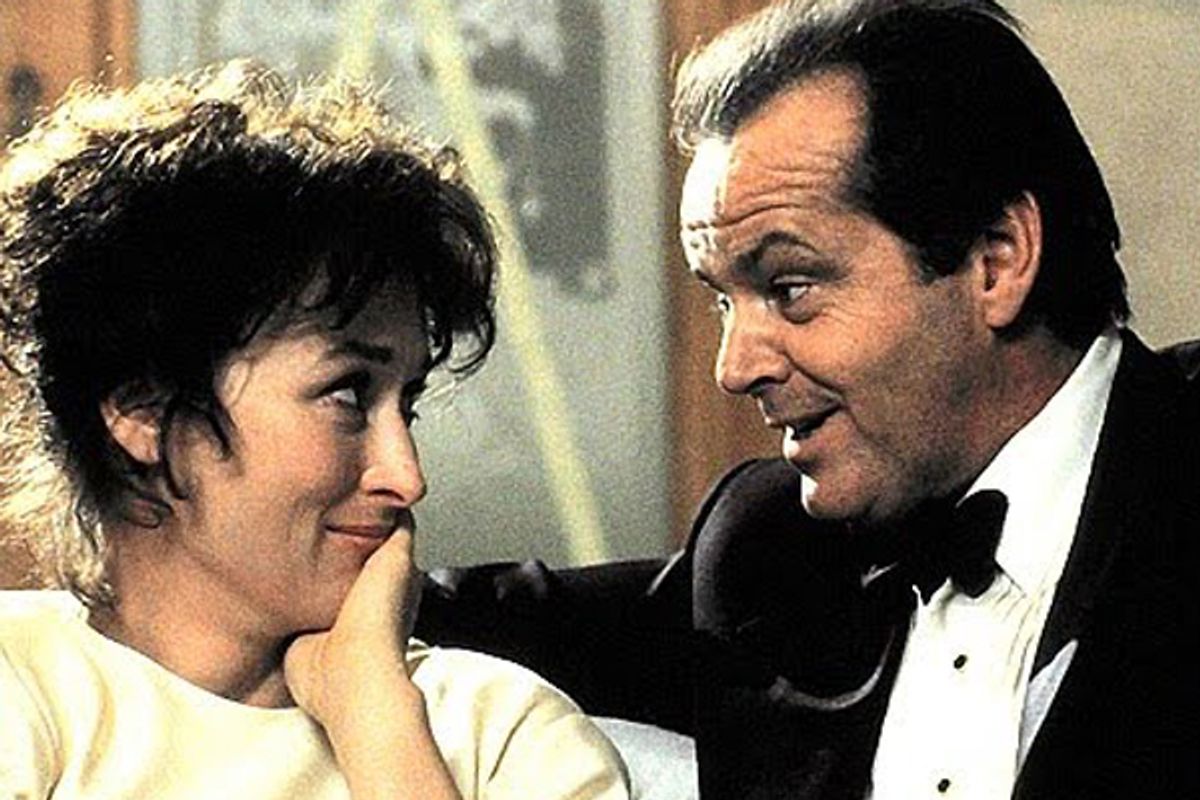 Nora Ephron apparently once said that all romantic comedies, from the 1930s onward, were just attempts to rewrite and restage "The Taming of the Shrew" and "Pride and Prejudice." She was right about that, of course, and was far too intelligent a person to claim that she had invented anything new. Her now-classic scripts for "When Harry Met Sally" and "Sleepless in Seattle" depend upon the simplest of reversals -- the two people who seem so wrong for each other are actually right for each other -- and the proposition that the war between the sexes ends in the mutual surrender of marriage. How much these ideas reflect reality is debatable, at best, but as comic conventions they have endured for centuries.

Ephron also learned from Shakespeare and Jane Austen that the genre requires a little bite, the threat of emotional violence not far below the surface. Meg Ryan's last words to Billy Crystal in "When Harry Met Sally," right before the big clinch, are, "I hate you, Harry. I really hate you." Ephron was both a traditionalist and a revolutionary, or perhaps a traditional revolutionary; she brought romantic comedy into the era of feminism without challenging its fundamental assumptions about men and women and what they want. Maybe that reflects underlying truths about human nature and maybe it doesn't, but it certainly both reflected and affected the Zeitgeist of turn-of-the-century America. Ephron's best scripts offered the comfort of an old-fashioned love story in what felt like a fizzy, urbane contemporary setting.

In Ephron's universe, men and women are approximate social equals, as well as sexual and economic free agents. She dispensed entirely with the requirement that the girls be virginal while the guys are shadowed with dark experience. Her characters are witty, fast-talking city dwellers who discussed previously forbidden topics like politics, religion and (most of all) sex. In the two decades since Ephron's biggest hits, rom-coms have gotten increasingly raunchy and foulmouthed, often desperately so. But whatever supposed new twists writers dream up -- make the lovers casual-sex partners or bisexual polyamorists or ex-lovers of each other's parents -- they're just spraying Cool Whip on a cake that Ephron baked, and their characters are just faking Meg Ryan's fake orgasm in Katz's Deli. (A scene that remains funny no matter how many times you've seen it. Just try it!)

Ephron died on Tuesday, at the relatively young age of 71, after a battle with leukemia, and it's rather too early to attempt a dispassionate critical analysis of her legacy. She absolutely didn't think she was done; just three years ago she wrote and directed "Julie & Julia," with Meryl Streep as legendary chef Julia Child, which against all odds became one of the biggest hits of her career. According to her Los Angeles Times obituary, Ephron was working on three new movie projects, including a comedy about an Austen fan catapulted into one of the author's novels and a crime drama with longtime collaborator Tom Hanks. While she'll always be best known for the trio of romantic comedies that ended in 1998 with "You've Got Mail" (co-written with her sister, Delia Ephron), she was also a prolific author who wrote humorous nonfiction, plays and the 1983 novel "Heartburn," a thinly veiled account of her failed marriage to political reporter Carl Bernstein.

With all that said, I think Ephron was a first-class comedy writer whose best lines and best scenes look better and better when compared with the effortful, shtick-laden dialogue of most subsequent romantic comedy. Her rhythm and pacing are exquisitely honed, and anyone who's tried to write comedy knows that comes from a combination of natural aptitude and long practice. (You might say Ephron was to the manner born; her parents were the Hollywood scriptwriting team Henry and Phoebe Ephron, who wrote the 1957 Spencer Tracy-Katharine Hepburn hit "Desk Set," among numerous other films.) Ephron's eight films as a director range from workmanlike to indifferent to pretty bad, although she was clearly justified in taking the reins of "Sleepless in Seattle" and "You've Got Mail" after Rob Reiner's near-fatal butchery of "When Harry Met Sally." Her last film, "Julie & Julia," was arguably her best (although the one before that, the Nicole Kidman-Will Ferrell flop "Bewitched," was probably her worst).

It's tempting to say that Ephron's most lasting legacy will be as a female pioneer in a male-dominated industry, a feminist who challenged the entrenched boys' club by making successful movies rather than waging a war of rhetoric. But I'm not even sure that's true; as Pete Hammond of Deadline Hollywood has observed, Ephron's death marks the end of an era. Her ascendancy in Hollywood seemed to augur a new day for powerful women behind the camera, but that day has not come. There are numerous female writer-directors in indie cinema (and women have long been accepted as screenwriters), but the roster of A-list Hollywood female directors in 2012 pretty much begins and ends with the ambiguous example of Kathryn Bigelow. Contemporary Hollywood has become, more than ever, a factory for market-tested mass entertainments crafted by committee, and the literate, adult-oriented comedies that Nora Ephron cherished and created have once again been shoved to the margins.