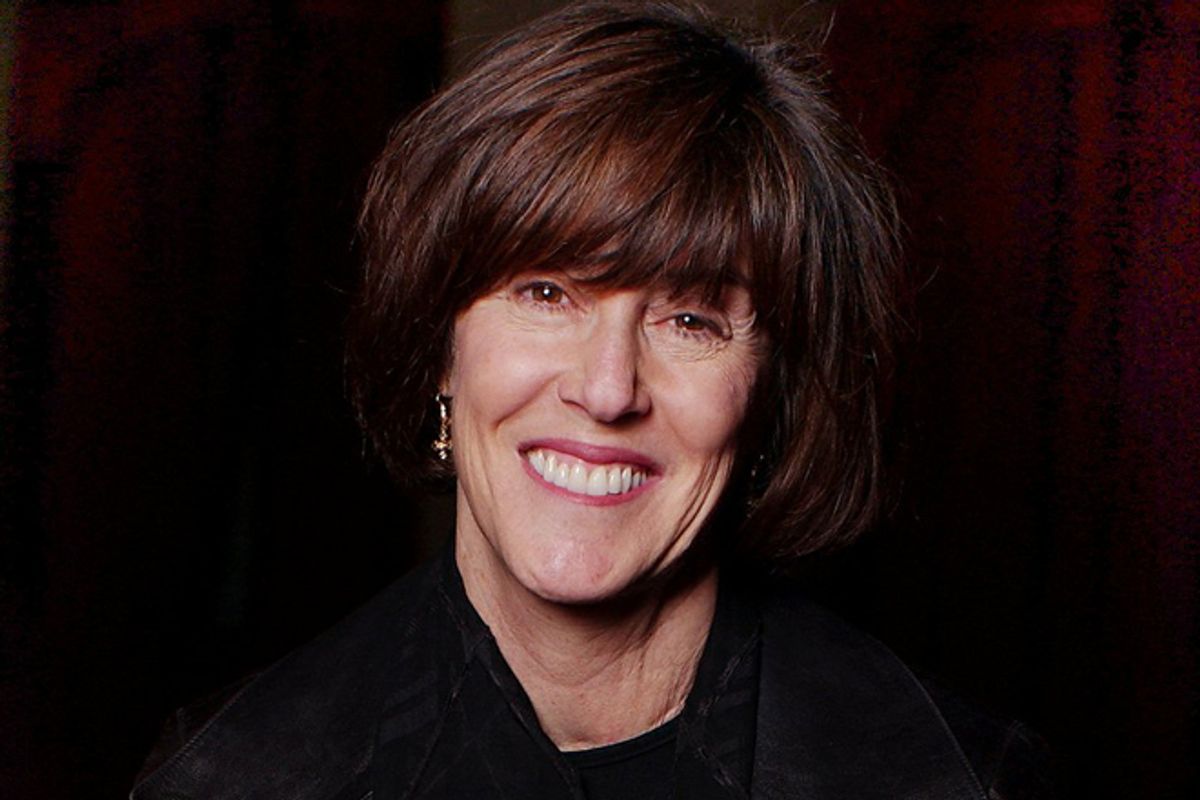 Early Wednesday morning, in the hours after Nora Ephron died, I had a loopy, obvious nightmare about a road trip during the summer solstice and a papier-mâché map laid out on the floor that was terrifyingly rearranged, so that I couldn’t find the places I needed to go. Nora was there, dressed in white, not her customary black, so pale of face and hair that I could see through her. Dream-Nora, or, I guess, ghost-Nora, was trying to give me financial advice, telling me to buy “incentives” and saying she had more to say but that by the time I returned from wherever I was going, she’d be gone.

When I woke in the middle of the night crying, something I thought only happened in movies, I tried to explain the dream to my husband. “She was going to tell me more,” I wept, trying to explain the “incentives,” the solstice, the road trip. Finally I heard myself sob angrily, my nose running and tears streaming with the fury of a child: “And the map of the world was all changed!”

When I say that Nora Ephron drew a map for many of us, I don’t just mean that she paved the roads and put up signposts for the female journalists, filmmakers, novelists (and really, female professionals of every stripe) who came after her, though she did.

I don’t just mean that she used her critical eye and a pragmatic voice to carve a path for the contemporary women’s movement, though she did. (In her fine obituary, New York’s Noreen Malone wrote, “I've sometimes thought that third-wave feminism might have been better described as Nora Ephron feminism.”)

I mean that in her work as a journalist, covering the thrilling rupture of gender politics in the 1970s, and then in her novel, her essays, her movies and her plays – which were always more complicated than people gave them credit for, especially if you care about women – she drew a big, stunningly beautiful map of female possibility.

Nora brought us a full range of behavior and passion, loss and love, of quirks and irritations and tragedies and revelations. She seemed to want to show women – difficult, demanding, persnickety, funny, smart women – that all this was life and that we were better equipped than we believed ourselves to be to travel through it, toughly.

Nora’s women could be hilarious and competitive, prudish and confident, raunchy and neurotic, churlish and sweet, and it was OK. This was the variety of female experience and behavior exposed as old assumptions about feminine nature began, slowly, to lift. These full human beings lived in a world where tragedy, coincidence, hard times and good luck were all possible, part of what made lives messy, interesting and hopeful. And so funny.

Once, when I was home from college, trying to come to grips with my own lonely unease in a world of sticky-floored fraternity houses, I settled onto my parents’ couch and sought familiar comfort, pressing “Play.” There was a lady who hadn’t had great sex yet, dragging a Christmas tree down city streets, having her heart broken, eating pastrami and cole slaw, telling her girlfriend to end a bad affair, talking about books and "Casablanca." There was Ben Small of the Coney Island Smalls, and his wife, who knew like you knew about a good melon. There were a couple of elderly New Yorkers, telling the scripted story of their unlikely meeting in a big and confounding world: “I rode up nine extra floors just to keep talking to her.” Yes. This was how life could be – complicated and bizarre and lonely and full of characters, but with surprising pleasures and rebounds and reinventions possible around the corner. “Nine. Extra. Floors.”

In my early 20s, I struggled as a young reporter, assigned to write a gossip column for a paper where I didn’t quite fit, in a knowing, cosmopolitan tone I could just barely ape. Once I wrote something nasty about a show that Nora Ephron was scheduled to stage, chronicling the complicated relationship between two exceptional, and exceptionally challenging, women. On the day the item was published, the phone at my tiny messy desk rang. It was Nora Ephron, asking why I would write such a thing. This was bad: an idol, justly angry about something I had written. I was abashed. But even while I quietly shook through the phone call, after she hung up, I had the strangest impulse to call her right back. I had this feeling that she had more to tell me.

Years later, we became friends. We became friends in part because she didn’t just make movies about complicated women and their relationships to each other and the world: She loved and supported complicated women; she believed in them and helped them and advised them and was generous to them and introduced them to each other. And she did tell me more. About marriage and work and love and doctors and books and recipes and she taught my husband how to hold a newborn in a very specific way and I loved her so much and I was so lucky.

But that was separate from the work, and this is a story about work, because Nora loved working, loved her work, and loved women who worked hard. She always took care to use the word “ambitious” as a compliment when she was talking about a woman.

In a world where it’s well nigh impossible to make movies about ladies of any shape or size, she somehow got a studio to green-light a feature about a deceased, tall, honking chef. "Julie & Julia" was one of the most unapologetically feminist movies I’ve ever had the pleasure of sitting through three times in a theater. I watched again and again, buzzing with pleasure and transfixed by the story of two women, driven by their passion for professional achievement – and not just that – women who openly, unapologetically desired recognition, payment, fame! Is it possible to convey how explosive this was? A portrayal of uncut, vivid, leaping female ambition that is not ugly, but flattering … gorgeous.

It was a miracle: a vision of women who wanted so much from life and who looked all the more beautiful for it. What a world she made. I’m so happy to live in it. If only I didn’t now have to navigate it without her.