A guide to every opinion and outcome of the healthcare case 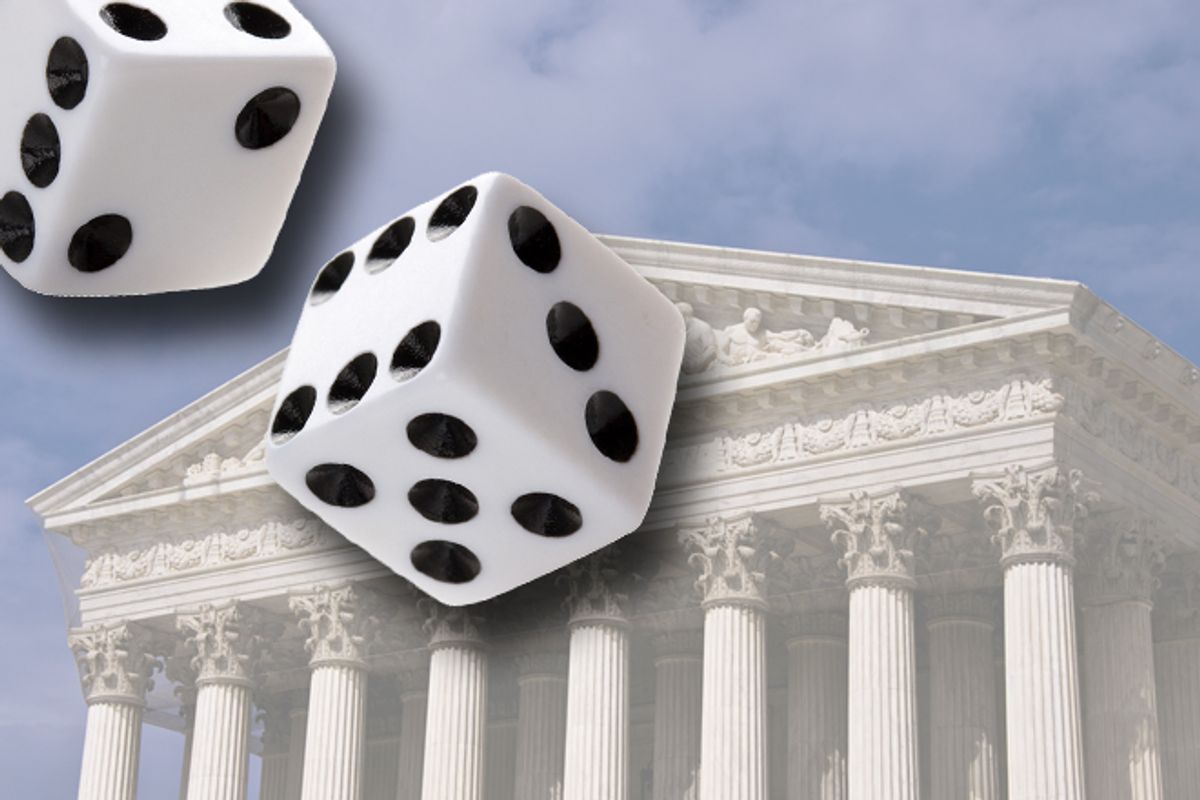 How will the Supreme Court decide the Affordable Care Act tomorrow? No one knows, but that hasn’t stopped them from guessing and there is plenty of speculation about what the court might do.

Unlike the Pentagon or the CIA, nothing ever leaks from the Supreme Court. Ever. While the court probably doesn’t have the high-tech security gear of the intelligence community, it doesn’t need it. With just nine justices and a maximum of 37 clerks at any point, there are fewer than 50 people on the planet who have access to the justices’ deliberations. Clerks have zero incentive to share information with the press, as the source could be easily traced among such a small pool of potential suspects and the move would almost certainly be the end of the leaker’s career -- not something the overachievers who make it to be Supreme Court clerks are likely to be interested in.

So we’re left to read tea leaves and speculate. You can even place money on such speculation at the political futures betting markets at Intrade.com, where bettors currently give a 74 percent chance that the court strikes down the individual mandate.

So which is most likely? Newsweek/Daily Beast correspondent Michael Tomasky, who also edits Democracy, thinks the conservative justices are little more than “politicians in robes” and will thus do whatever “will inflict the maximum possible political damage on Obama and the Democrats.” This, he argues, means a 5-4 ruling striking down the mandate -- “but it means doing so narrowly, carefully, almost regretfully” so as not to rile up the liberal base or provide much fodder for Democrats to claim the court acted politically.

The Guardian assembled a panel of legal scholars who were more upbeat. Of the five, four thought the court will uphold the mandate, and three predicted a 6-3 vote, with Chief Justice John Roberts writing the majority.

ScotusBlog publisher Tom Goldstein agreed, writing today that he thinks the mandate will be upheld. “My level of confidence isn’t overwhelming, but it’s good enough to give a concrete prediction,” he wrote in a widely disseminated blog post. He added that he too thinks Roberts will write the decision.

Indeed, if there’s one thing experts seem to agree on, it’s that Roberts will write the opinion either way. Sean Trende, writing in Real Clear Politics, lays out a pretty convincing case, noting that the court tries to divide up opinions fairly evenly among its justices, and Roberts is overdue. The other justices with fewer-than-average rulings are likely too extreme (Clarence Thomas) or too junior (Sonia Sotomayor) to be given the opinion on a case of such magnitude. Roberts may also want to use his seniority to confer extra authority to such a controversial case. Trender suspects this means big trouble for law, as Roberts was unsympathetic to the government’s case in oral arguments, but he concedes that Roberts could vote strategically with the majority as well.

The argument here is that if swing Justice Anthony Kennedy votes to uphold the law, Roberts will join the majority so he can assign himself the opinion and write it as narrowly as possible. (The most senior justice on either side gets to choose who writes the majority opinion.) The other thing everybody agrees is that Kennedy will be the deciding vote, but this is true for many contentious cases.

Forbes’ Avik Roy also thinks Roberts will write the opinion, but that it will be a negative one for the Obama administration, overturning much of the law.

Other experts looked to Monday's rulings for guidance. Former Bush speechwriter David Frum wrote that SEIU v. Knox suggested the  court doesn't buy free-rider arguments, which are the center of the case for the individual mandate, so that's a bad sign. But others said the ruling on Arizona's immigration law, in which the court mostly sided with the administration despite expressing doubt during oral arguments is a good sign.

Meanwhile, former Supreme Court law clerks predicted back in March that the court will easily uphold the law -- but then switched their votes this month to say it is a goner.

A company called Sensory Logic had its own take. Judging by how much each justice smiled, they predict the law is going down (it’s unclear how they even made that assessment as cameras are not allowed in the courtroom).

In other words, we don’t know.

As the Washington Post’s Sarah Kliff noted, even the so-called experts usually get it wrong. When it comes to predicting the Supreme Court, you’re almost as well off flipping a coin.