Is threatening to torch books the only way we can get people to care about them anymore? 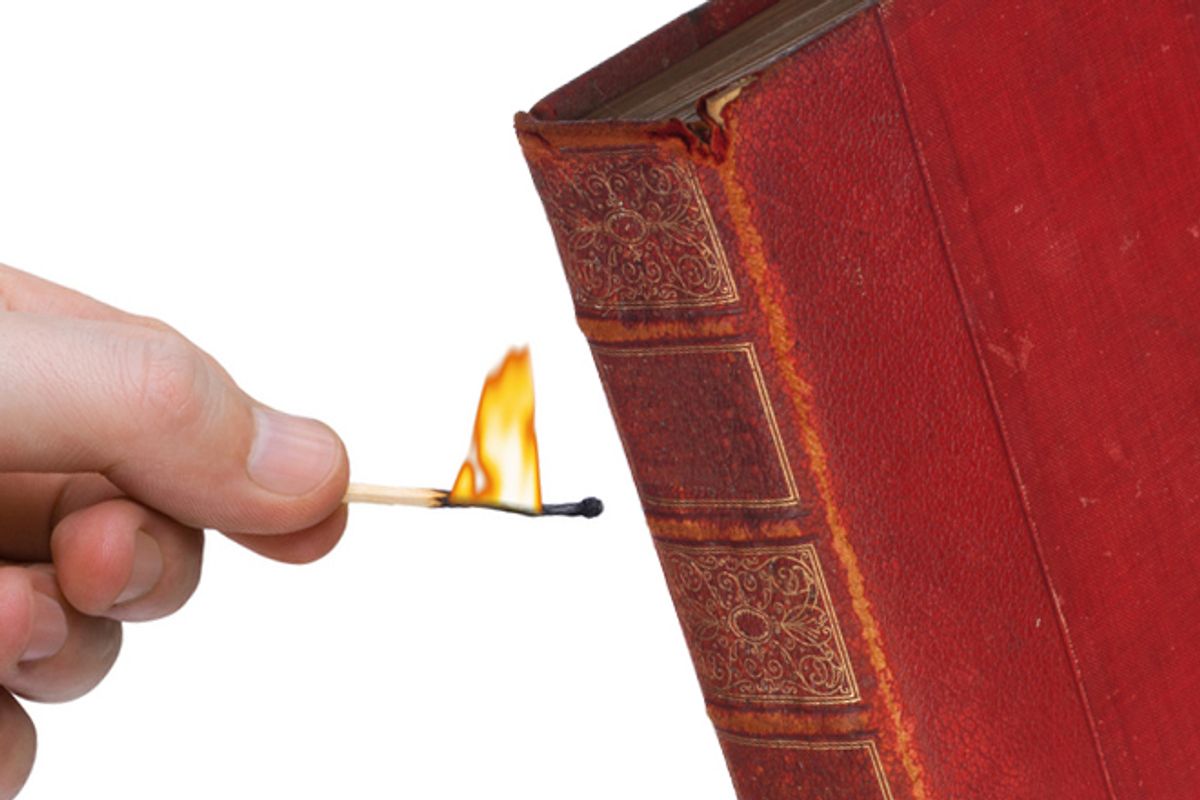 (Tatiana Popova and memaggiesa via Shutterstock)
--

In order to save the books, they had to threaten to burn them. At least, that's the story told by Leo Burnett Worldwide, a Michigan advertising company that just won nine awards at the Cannes Lions International Festival of Creativity. The kudos were for a P.R. campaign on behalf of the Troy, Mich., public library. A ballot measure was up before the Troy electorate last summer, seeking a local property tax increase to cover the operating costs of the library. Without the funds, the city council maintained, the library would have to be closed.

Leo Burnett Worldwide stepped into the debate as a ringer, pretending to be a Tea Partyish outfit called Safeguarding American Families (SAFE) that planned a bonfire of library books should it succeed in getting the ballot measure defeated. They created a Facebook page and went around town putting up yard signs advertising a "Book Burning Party" to be held after the election. The response from the public was almost equal parts puzzlement and ire, but when the moment of truth came, voters turned out in droves and the measure passed.

Recently, a woman in Saskatchewan, Canada, also resorted to talk of burning the 300,000 books she inherited from a neighbor seven years ago. Shauna Raycraft needed help to sort the books so that they could be donated to appropriate charities, and the only way to attract the requisite attention and volunteers was to claim she was on the verge of striking a match.

Book burning is so, um, inflammatory that it sometimes seems to have given that adjective its figurative meaning. The Facebook page for the Troy book burning party provoked hoards of indignant comments, such as those quoted in the video Leo Burnett Worldwide made about the campaign: "You people are sick"; "This is disgusting. Reject the wackos"; and so on. Even the quixotic Saskatchewan lady got a bit of the same treatment: "Ray Bradbury is rolling in his grave ... Burning books? Horrific!" and "I'd sick [sic] the mechanical hound on her," commenters fulminated.

However, the folks at the Troy public library really didn't like being associated with book burning, whether or not it saved their stacks. A staffer gave the advertising agency a dressing down on a local blog, accusing it of swanning into town to execute a little self-aggrandizing "political theater" and then trying to take unearned credit for the Election Day success. "You did nothing to help support the Troy Public Library on August 2," Phillip Kwick wrote. "All you did was cause confusion that Library supporters have been trying to avoid at all costs."

Yet the fact remains that Troy voters had defeated two earlier ballot measures seeking funds for the library. Perhaps local activists finally succeeded in mobilizing the library's supporters, or maybe -- as sometimes seems to be the case -- the one surefire way to get Americans to care about books is to talk about burning them.

When a Leo Burnett spokesperson told the librarians that the agency's goal was "to turn the rational conversation into an emotional one" because "this community has become numb to the rational conversation surrounding the library," he made a shrewd point. The SAFE campaign was profoundly irrational, which is probably why it worked so well. You have to wonder how effective it would have been if the boogeyman deployed to motivate voters was the specter of locked library doors and the books inside gathering dust or being carted off to a warehouse somewhere to gather even more dust until someone decided to discreetly trash them. That's what happens to most books, after all, and no one protests.

What gets lost in the furor is this key fact: The terrible thing about burning books is that then nobody can read them. If nobody's going to read them anyway because they are too busy browsing YouTube or watching "America's Got Talent" or playing "Call of Duty," if the books sit in storage until they crumble away because no one checks them out, the end result is the same. If they're sent out to bookstores and end up returned and pulped because they didn't sell -- the fate of some 40 percent of all the books published -- the end result is the same. If someone on Etsy turns them into an artwork or a purse or an iPad case, the end result is the same, except there will be squee-ish links to it from Facebook. The books don't get read. And books become inert, meaningless objects if they are never read. In which case, you might as well burn them.

Many, many books are destroyed or otherwise go to waste in America every day. Authors write books, good or (far more probably) bad, and publish them (traditionally or on their own) and they never find an audience willing to give them a shot. And then there are the books that never get written in the first place because the same public that cares enough to vent its fury over book burning all over the Internet doesn't want to pay more than a couple of bucks per title. Unless an author can churn out a string of novels about kinky millionaires -- or hit men or romantic triangles among trolls -- he or she can't afford to quit that day job (or even to go part-time) to research and to write. Oblivion is oblivion, whether it's dealt out by fire or overtime.

Getting mad about book burning, however -- well, everyone's got plenty of time and energy for that! Fulminating about it gives you the chance to admire your own reverence for the printed word, for ideas and for literature, without actually having to devote any real attention to those things. Let's face it, is there anything more fun than working up a good head of outrage at the morons -- the cretins, the thugs! -- who dare to infringe on the freedoms we're too busy with other stuff to exercise? As motivating passions go, loving the library can't really compete with hating the people we imagine to be attacking it.

Of course, libraries are under attack; funding cuts and the propensity of shortsighted bureaucrats and techno-utopians to pronounce them irrelevant in the age of Google are the primary culprits. Delusional anti-tax activists who expect to get top-notch services at bargain-basement prices are definitely a menace, but even they do not advocate the closure of libraries. (In Troy they claimed there was plenty of money to keep the library open if the City Council were not so extravagant.) But jackbooted post-literates brandishing torches? Not so much. In any event, the books most likely to be targeted for burning these days tend to be religious texts that are not hurting for readers.

The Leo Burnett Worldwide video promoting the library campaign is full of bouncy, up-with-people pride about their ability to employ "audacity," social media, guerrilla marketing tactics and viral whatever to "change the conversation." In truth, the stunt's greatest audacity lies in its cynicism. It's founded on the assumption that Troy's voters aren't using the library enough to be alarmed at the simple prospect of its closing. Instead, the library had to be transformed in their minds from a real-world resource into a symbol, a token in a bitter culture war in which whoever casts his opponent as the biggest barbarian wins.

Like the "traditional family values" championed by closet-case conservatives, the book as well as the library is in danger of becoming an object of nostalgia, a fetish, worshiped from afar but not -- God forbid! -- actually lived with. Do we value it as a vital part of our daily routine, or as just as an emblem of our superior cultivation and virtue? Because if it's the first, then we should fuss a whole lot less over whether some books get burned and a whole lot more over whether any of them get read.

Facebook page for the 2011 "Book Burning Party" in Troy, Mich.

A post at the Books for Walls Blog about the fake book burning party, with comment by library employee Paul Kwick

Readers of the LitReactor blog respond to the news that Shauna Raycraft may burn some of the 300,000 books she rescued seven years ago