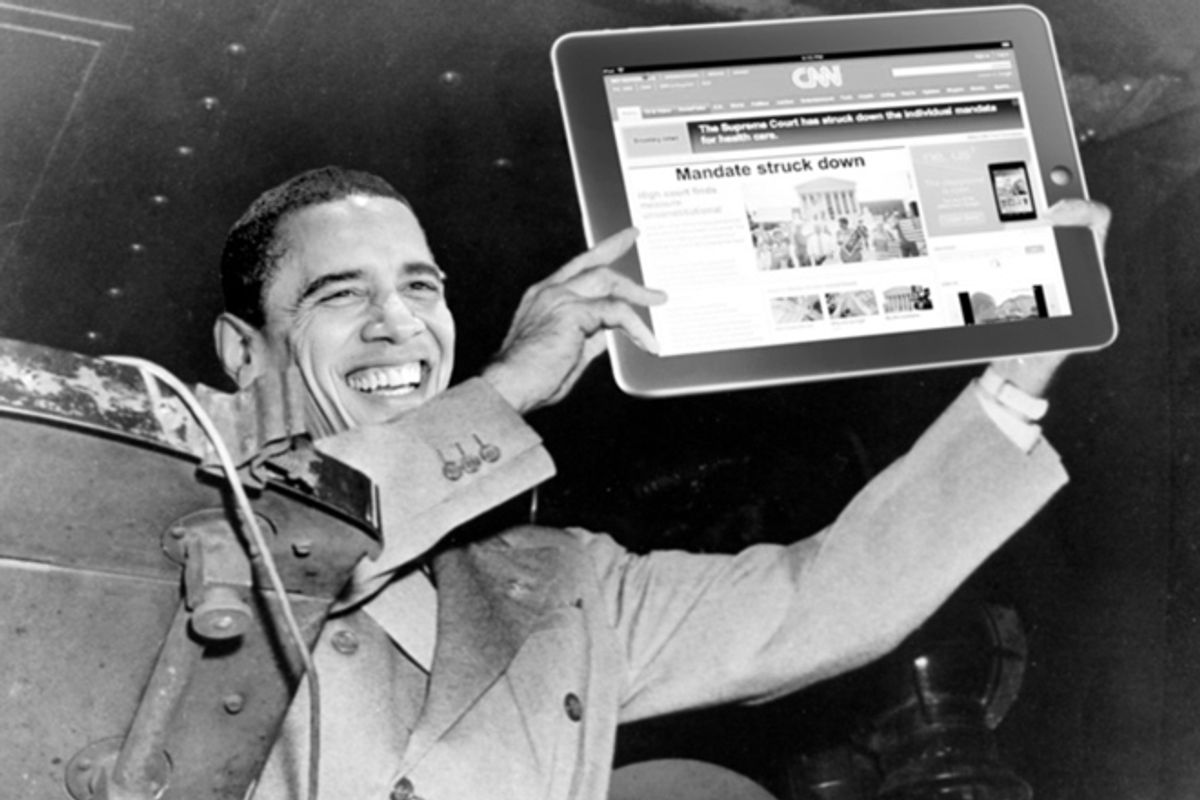 Haha whoops. When Chief Justice John Roberts shocked the world by voting to uphold "Obamacare" (with a narrow, conservative argument that leaves future Commerce Clause-related decisions up in the air), CNN got so excited for some breaking news that they reported the wrong breaking news.

The entire video is pretty classic CNN, from Wolf Blitzer couching everything he says in conditional language ("if in fact the Supreme Court has ruled that the individual mandate is unconstitutional that would be history unfolding") to underscore the point that he has absolutely no clue what he's talking about to the channel's decision to immediately ask what a decision to strike down the law would mean politically, for the Democrats and the president, instead of, say, what it would mean for regular people, like the uninsured or the newly insured.

A dramatic moment! Dramatic and totally wrong! Various unnamed CNN employees are apparently appalled and pissed off at the sloppiness. And they should be!

This is extra embarrassing because every news outlet that took an extra minute to have someone read the decision before they announced the takeaway got it right. (CNN was joined in its wrongness by... Fox News.) The Associated Press worked just as fast, and got it right. (It gloated about this fact, then retracted the gloating.)

According to the sort of people for whom CNN's ratings woes reflect a moral failing of the American people as opposed to a series of boneheaded decisions by CNN executives, CNN is posting its worst ratings in 20 years because people only want to watch biased news that they agree with, and they no longer care about Original Reporting and Unbiased Fact-Based Journalism. In reality, CNN is failing because CNN sucks. It doesn't fill its daylight hours with hard-hitting reporting from far-flung locales, it fills it with Wolf Blitzer sputtering softballs at politicians followed by shouting partisans (from both sides!) having idiotic arguments. For hours. CNN staffers seem to understand this. From Dylan Byers' recent Politico story on CNN's ratings woes:

“It’s frustrating to hear our leadership talk about the exemplary journalism we do, then turn on the TV during the day and see CNN doing another story about ‘birthers’ or ‘tips for dining out alone,’” said one staffer.

But there is still one thing CNN actually does that people care about -- one thing that people still turn to CNN alone for -- and that's breaking news. Helicopter crashes and freak weather events and foreign crises and major Supreme Court decisions are supposed to be when CNN shines. So it might want to try to actually get those things right.