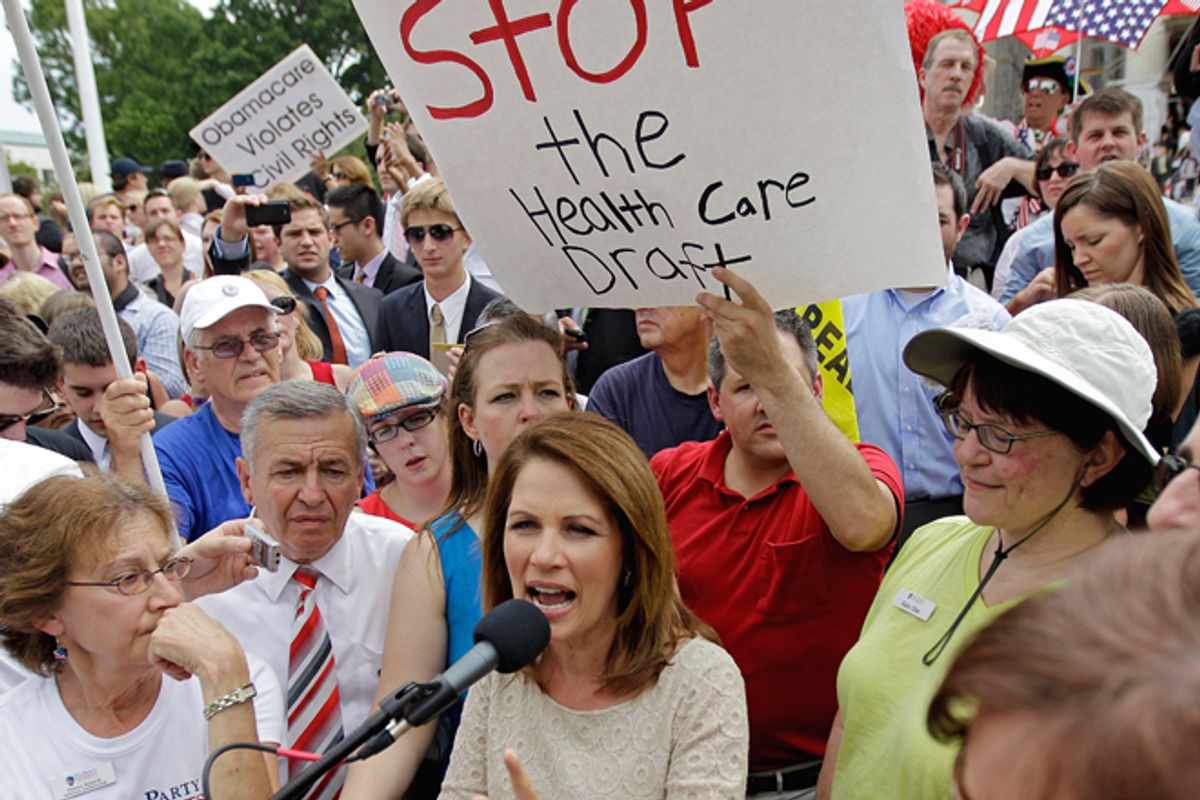 Michele Bachmann speaks outside the Supreme Court after the court's ruling on President Obama's health care law was announced on Thursday. (AP/David Goldman)
--

Conservative Chief Justice John Roberts single-handedly saved the Affordable Care Act today, siding with the liberal bloc of the Supreme Court to uphold the law, even though more moderate Justice Anthony Kennedy led the dissent. Roberts, appointed by George W. Bush over the objections of many Democrats, is widely popular among Republicans. Or at least he was.

The steps of the Supreme Court this morning were packed with conservatives deeply disappointed by the ruling and hurt by the apparent betrayal from one of their own. "I think a lot of Chief Justice Roberts. I think his whole history of jurisprudence is deserving of respect from this country -- up to, and not necessarily including, this opinion today,” Rep. Steve King, a Republican from Iowa, told Salon. "If I issued an opinion, I think Chief Justice Roberts would want to read my full opinion before he criticized me, and I want to read his opinion, but really, I have a sick feeling in my stomach about what happened here today."

The biggest betrayal seemed to be that Roberts not only joined the liberal justices to preserve Obamacare, but that he created a novel argument to do so. The Obama administration argued the individual mandate was valid under the Constitution's Commerce Clause, but Roberts instead said it was valid as a tax.

"It's patently absurd," seethed Seton Motley, a conservative activist with LessGovernment.org. "This is the umpire calling the game for the first five innings, and then putting on a cap and glove and playing first base. You can't sit and preside over the case as a judge and then say, you know what, you didn't make the right argument, we'll make it for you and rule in your favor with an argument that we think is better than yours,” he said.

Rep. Louie Gohmert, a Tea Party Republican from Texas, told Salon of Roberts, "I'm sorry he's become so cynical."  "He expects the president of the United States to lie to him, and to lie to America when [Obama] said -- and he had it said on his behalf repeatedly -- this was not a tax. For Justice Roberts to say, of course it's a tax, he makes very clearly that he believes the president is a liar and it's a sad day for America," Gohmert explained.

“I have a message for Chief Justice Roberts," Dean Clancy of the Tea Party group Freedomworks declared over the loudspeaker after the ruling came down. "The power to tax is the power to destroy.”

Some observers speculated that Roberts' own medical history, including two unexplained seizures that would make him almost uninsurable on the individual market, could have informed his opinion.

"It's a terrible day for the American people," said Rep. Michele Bachmann, the Minnesota Republican who ran for president earlier this year. "This was an activist court that rewrote the law to make it even more ineffectual, and even more expensive. So this is a sad day."

“Chief Justice Roberts was the worst part of the Bush legacy,” Ben Shaprio, a conservative columnist and editor at Breitbart.com, said on Twitter.

Bryan Fischer, the prominent Christian-right activist, told BuzzFeed’s Rosie Gray that Roberts "is going down in history as the justice that shredded the Constitution and turned it into a worthless piece of parchment "