Is Louis C.K. even a comedian?

A brilliantly funny new season of "Louie" is about sex, modern manners and parenting -- and unconcerned with laughs 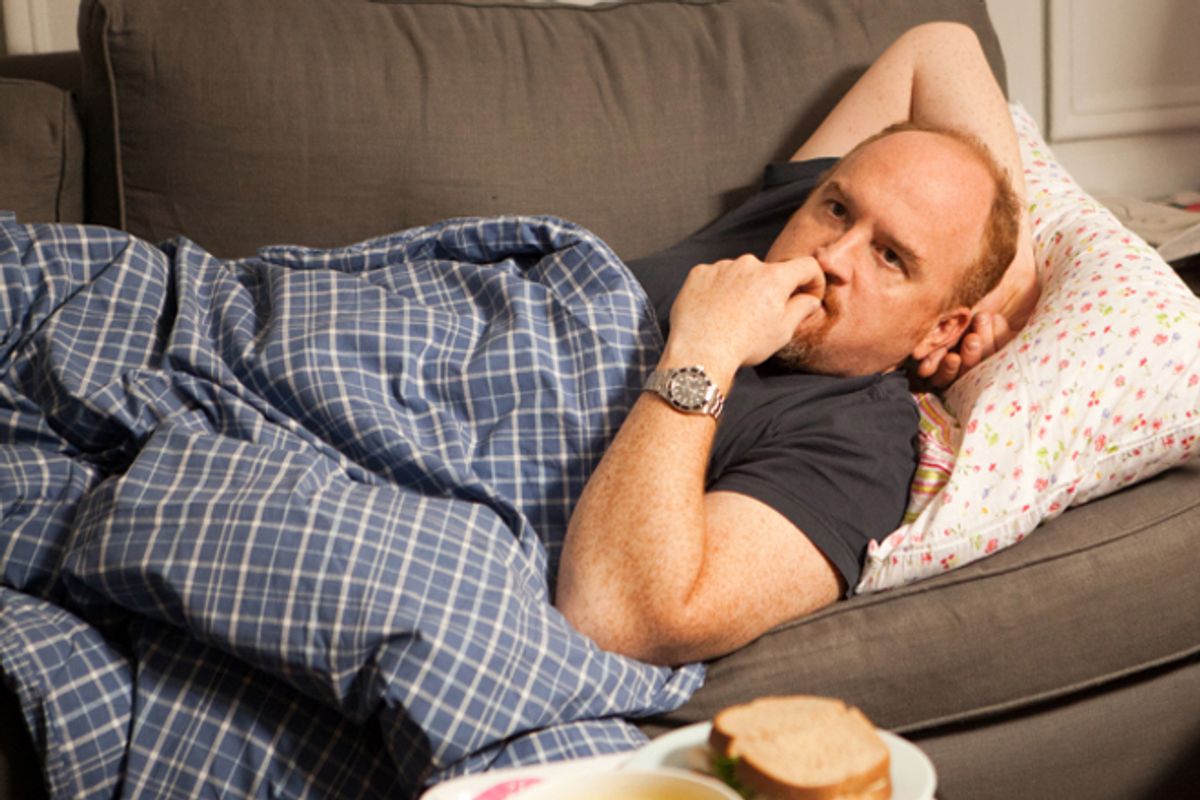 In the fantastic new season of “Louie,” FX’s gut-punching, experimental sitcom-in-name-only, created, written by and starring Louis C.K., Louie does a stand-up bit about his 7-year-old daughter’s jokes. He loves her jokes, because unlike almost every other joke he -- a joke expert -- hears, Louie has no idea where these are going. The example he riffs on begins with a totally original setup: “Who didn't let the gorilla into the ballet?” It ends with the totally original punch line, “Just the people who are in charge of that decision.” Louie fills out the scene, describing how he can imagine the gorilla trying to sneak into the theater, keeping his head down and texting, until a ballet employee calls the gorilla out of the crowd and explains he isn’t allowed in. Gorillas usually can’t stay calm through the second act. Sorry, gorilla.

On stage, C.K. puts over just how tickled he is by the unconventionality of the joke, and it's a joy that suffuses "Louie" as well, an entirely unconventional sitcom. "Louie" is like the gorilla trying to go to the ballet, idiosyncratic and grounded, an oddity acting normally, a show simultaneously strange and utterly believable.

Each episode of "Louie" begins with a simple premise. Writing in Vulture about Louis C.K.’s previous show, the failed HBO sitcom “Lucky Louie,” Margaret Lyons observed that C.K.’s modus operandi is to “start out with something normal, familiar, mundane even — why are we bickering about something small? — and go deeper and further with the premise, until suddenly we're far past rational.” The wonder of “Louie” is that each step deeper and further — each step away from a normal situation, whether a man buying a motorcycle, getting set up on a date, taking a trip to Miami or breaking up with a woman, all of which happen in Season 3 — is completely credible. So by the time Louie is doing the past-rational thing — taking cellphone calls on a backboard; making an explicit $1,000 bet with a woman that he won’t be having sex with her in five minutes; stuttering about his maybe-maybe not attraction to the most dashing Cuban man alive; letting a woman break up with herself on his behalf — it seems like the situation could not have gone any other way. Watching "Louie" is like watching something insanely difficult and precarious being built — a construction that in any other hands would just tip right over — with such confidence and speed it seems both easy and destined to be. (In the spirit of "Louie's" own surrealism, a world in which hobos are occasionally decapitated on the street, I'm letting my metaphors run away with me.)

The plausibility factor is also what makes “Louie” unlike almost any other sitcom: For a show that contains actual bits of stand-up comedy, it is remarkably unconcerned with laughs. “Louie” can be uproarious, but hilarity is not the priority. In the second episode, there is a bravura scene between Louie and the actress Melissa Leo, who plays a woman with whom he has been set up on a date. After a rocky start, the two hit it off, and Leo’s character volunteers to go down on Louie in a van. When she asks that he return the favor, he says that would make him uncomfortable. Instead of getting embarrassed, she's outraged, eventually betting him that he will go down on her in the next five minutes, something she proceeds to make happen. (Half by force of will, half by jumping on Louie’s head.) This scene is riotous, but it is so much more. It's also one of the most original and straightforward sex scenes I’ve ever seen, one that flip-flops gender roles, deals with the reality of female desire in a matter-of-fact way that is rarely, if ever, put on camera, and it explores the manners of sex and the sexiness of (a lack of) manners. Since watching it, I’ve thought of it frequently, but its humor is the least of what’s interesting about it.

And this scene with Leo is just one of the third season’s gangbusters set pieces. Each of the first five episodes, the last being a two-parter, leads up to a climactic moment that pivots around something supremely simple — a difficult conversation. These four scenes, tour de forces all, are thematically linked by Louie’s language skills. In the first, the breakup scene mentioned earlier, Louis is speechless; in the second, the one with Leo, he can barely get a word in; in the third, in which he stumbles around a maybe man-crush, he stutters horribly. In the fourth, in which he asks Parker Posey out, he refuses to stop talking. All four of these scenes are as complicated, stunning and heart-in-mouth compelling as, say, any “Breaking Bad” action sequence and all they involve is Louie, and another person, struggling with their words. Who needs jokes?