"Beasts of the Southern Wild": A spectacular bayou folk tale 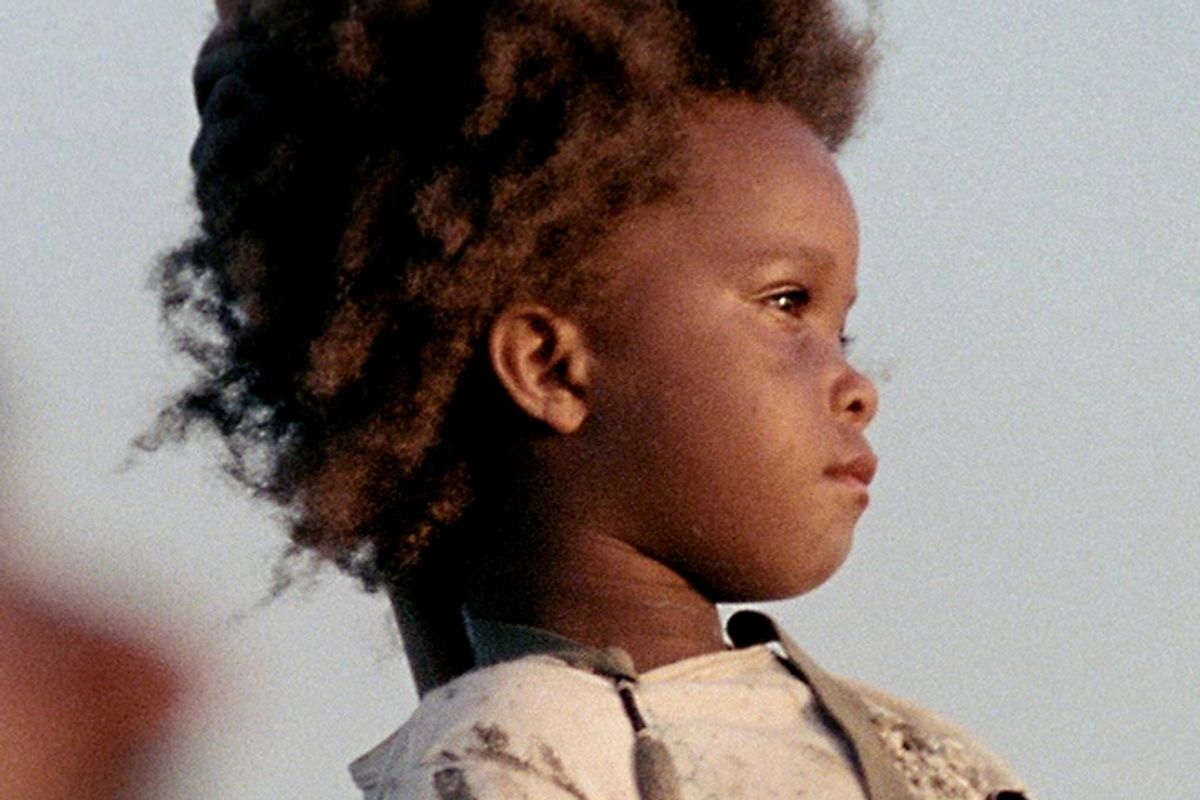 Quvenzhané Wallis in "Beasts of the Southern Wild"
--

A magic-realist setting in southern Louisiana's bayou country, a child protagonist, a Katrina-scale storm, a posse of enormous prehistoric beasts set loose by the melting polar icecaps, a floating brothel staffed by long-lost moms and a terrorist bombing involving an alligator carcass stuffed with dynamite. Oh, and a cast composed entirely of nonprofessional actors, most of them African-American. Those are the ingredients -- or some of them, anyway -- in the swirling, kaleidoscopic "Beasts of the Southern Wild," the extraordinary and somewhat baffling debut feature from indie writer-director Benh Zeitlin and his New Orleans-based collective Court 13 Pictures.

I don't especially want to be the kind of guy who focuses about marketing issues, especially when there are so many other things about this movie to puzzle through -- such as what the hell it's all about and whether it hangs together. But everybody in the film world is fascinated by the question of whether "Beasts of the Southern Wild," which won both a Grand Jury Prize at Sundance and the Caméra d'Or at Cannes (for best first film in the entire festival), can connect with a wider audience. There's room for only a few adult-oriented indie hits on the overcrowded movie calendar every year, and even those tend to be familiar, name-brand products (think Wes Anderson's "Moonrise Kingdom," or the all-star British cast of "The Best Exotic Marigold Hotel"). With so many different kinds of entertainment product competing for eyeballs in various media, the marketplace has grown increasingly hostile to adventurous, unclassifiable fare lacking recognizable names or an artistic pedigree, which is exactly what you get in "Beasts of the Southern Wild."

A semi-mythological tall tale about a father and daughter living in near-feral seclusion on a swampy bayou island called the Bathtub -- it isn't a real place, although Zeitlin says he's seen towns like it -- "Beasts" comes completely unglued if you start to pick away at it with logic. The point of watching the film, and the only reason to see it, is the experience of watching it, which sounds tautological or something, but is just true. It's a powerful visual and sonic creation (shot by Ben Richardson, with a score by Zeitlin and Dan Romer) with unforgettable characters, set in a heartache-inducing imaginary vision of American community, worlds away from hyper-technologized urban existence. Do the immense energy, vision and warmth of this film make up for what you might call its intentionally naive and nostalgic mood, or its absence of anything like a conventional plot? For me they absolutely did, but that's a highly subjective question. Compared to some of the Asian and Eastern European movies I like, this is pretty much Steven Spielberg.

Thing is, Steven Spielberg will love this film, if he doesn't already. Zeitlin's ability to create a believable world out of seemingly impossible ingredients is just that good. Hushpuppy, played by the irresistible Quvenzhané Wallis, is a lanky, unkempt girl of 7 or so, who lives in a jury-rigged shantytown built from recycled bits of boats, cars and other hardware, probably by her father, Wink (Dwight Henry), who suffers from an unknown illness. While the filmmakers auditioned thousands of Gulf Coast girls before picking Wallis, Henry is a guy who worked at a bakery across the street from their New Orleans production office. They had to talk him into taking the role, and you can see why they did. While Wallis is a loquacious, sunny child with natural screen chemistry, Henry carries with him a tremendous weight of lived experience, a blend of soulfulness, dignity, wisdom and anger that lends the film a darker, more manic tinge it badly needs. Wink's relationship to Hushpuppy is complicated, often anguished, occasionally violent and always loving. He believes, or knows, that time is short, and that he has to teach her enough to survive in the Bathtub, as well as the larger world on her own.

As I've suggested a couple of times, a story synopsis of "Beasts of the Southern Wild" isn't that helpful, since the more I talk about it the more it starts to sound like a crackpot collaboration between Carl Jung, Terrence Malick, Terry Gilliam and Al Gore. Hushpuppy can sort of, kind of, communicate with wildlife, like an underage Doctor Dolittle clad in underpants and galoshes, and they and she know that a big storm is coming that will submerge the Bathtub. Hushpuppy is also convinced that the aurochs, a fearsome species extinct since the Ice Age, will be unleashed by global warming, and is apparently determined to swim all the way to Louisiana. (Yes, I know, biology mavens: The actual aurochs was a species of wild Eurasian cattle that lived as recently as the 17th century, and did not look anything like the giant boar-monsters seen in "Beasts.")

With the Bathtub underwater and seemingly poisoned, food scarce and Wink getting sicker, father and daughter are forcibly evacuated to a shelter, presented (whether justifiably or not) as a bureaucratic nightmare that's worse than dying at home. The Bathtub's denizens bust out and launch a quixotic attack against the levees that protect urbanites to the north from rising floodwaters, and while I don't think Zeitlin and co-writer Lucy Alibar actually mean to suggest that a handful of backwater idiots with a homemade alligator bomb caused the flooding of the Lower Ninth Ward in 2005, that's what occurred to me. If all that isn't enough mytho-political symbolism for you, Hushpuppy goes on a quest for her long-missing mother, and maybe finds her at a half-tawdry, half-paradisiacal floating catfish shack cum whorehouse.

Again -- and I'm being serious -- don't let any of that stop you. If on some level "Beasts of the Southern Wild" may be nonsense, it's a wonderful, imaginative and daring breed of nonsense. There's already some degree of backlash against this movie, certainly on aesthetic and probably on ideological or representational grounds: You know, what is a college-educated white kid from New York doing making a movie about poor black folks in Louisiana, still less an eco-parable full of hoo-ha about the universe being all connected? (Zeitlin is the child of two folklorists, which makes a lot of sense.) If you actually see the movie, I think its beauty and vitality and integrity speak for themselves, and it's definitely not like any other movie you'll see this year, or in any other. But how many people are willing to set aside prejudice and suspicion and endless distraction to see something that is, in all honesty, this weird?