Neil Young: "I'm back in the same place"

Interview: Neil Young compares recording to animals and White Castle, and shares a trip home in the film "Journeys" 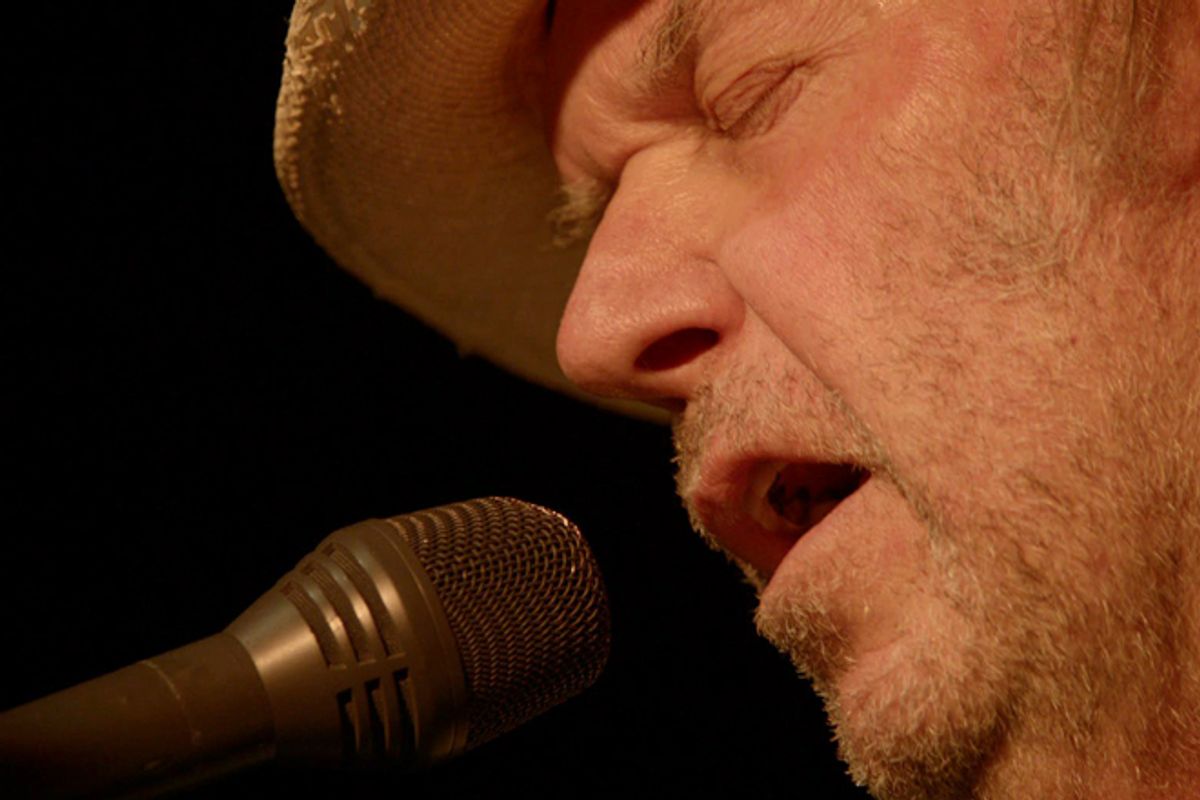 In 2005, Jonathan Demme filmed Neil Young and his band for "Heart of Gold," a documentary that served as a Valentine to Nashville's Ryman Auditorium and celebrated the extended family of musicians that Young had surrounded himself over the years.

Seven years later, Demme and Young's third film together is a notably sadder affair. For for most of the 87 minutes of "Neil Young: Journeys," the musician is alone: onstage at Toronto's Massey Hall, with only his Les Paul for company, or milling about backstage, taking a swing of beer and sucking on a few orange wedges before returning for an encore. Demme intercuts the concert performances with footage of Young driving to the venue from his hometown of Omemee (the "town in North Ontario" mentioned in "Helpless") and although Demme's riding shotgun, he's a silent observer, hanging back and letting Young muse about distant memories.

Popping up everywhere in both the songs (most of them from 2010's noisily ragged "Le Noise") and the stories are the ghosts of friends and lovers — and even the four Kent State victims, pictured onscreen as Young runs through a particularly rageful version of "Ohio."

As close as Demme's camera gets to Neil — detailing whiskers, spittle, and the frayed threads of his hat — there are ways in which the seems to remain sealed off from the outside world. After Young and his brother Bob visit the razed site of their childhood home, there's a pause. "Yep," Young exhales, and then slams shut the door to his car, leaving the past behind.

The idea of looking back has always seemed to both beguile and unsettle Young; the man who's written an album's worth of songs about ancient tribes has also embraced punk rock, the vocoder and emerging technology. Earlier this year he announced the development of Pono, a new audio format and streaming subscription service meant to dethrone the MP3. On a sunny afternoon in early June, Neil Young showed up with Jonathan Demme at the Parker Meridian hotel in a cheerful, relaxed mood, ready to tackle the past and the future before a small group of writers.

You put a lot of effort into the sound recording of "Journeys." But at one point in the film, you're driving around in that 1956 Crown Victoria, pointing to the puny car stereo speaker and saying, "I don't give a shit if the speaker's this big — I can listen to that."

Young: Yeah, the size of the speaker doesn't matter to me, it's the resolution coming through the speakers.

So it's more about making sure that the original document is as good as possible?

Demme: More than any other thing we've done, or anybody's done, this is really a sound-dependent movie. They've got to deliver the sound so you can feel it, not just hear it. Like at first it's like "is that a mistake," you know it's so like "Whoa, was that some kind of crazed feedback or something?" The big thing with the movie, was like, if we can't capture that visceral feeling then we shouldn't do the movie. And I think there are very few pictures that have that, like maybe SenSurround Titanic, maybe.

Young: It's prepared guitar, it's a prepared instrument, it's not just plugged in. So there's more to it then you would expect and it's like the fantastic voyage kind of like into music, you get to go farther into the sound and there are no distractions. You're not used to hearing something this mammoth-sounding without crunching bass or crunching drums or surrounded by some sort of industrial noise, so you just get so far into it that it's a different experience kind of like the fantastic voyage into music. You're in another position than you're used to being in and there's no distractions, you're so close to the electric guitar when it's playing. This completely exposes it. It's Robert Mapplethorpe.

That roaring guitar is especially notable in "Peaceful Valley Boulevard," which is about the wheel of progress, and mirrors the journey from Omemee to Toronto.

Demme: What's cool is that by going back to this little town, which is unspoiled, it's kind of like a time warpy thing. Then you go from a little town through farmland, you start seeing some development, you start seeing land torn up to make way for more developments, and then you're on the freeway, which I find terrifying every time I look up.  I'm like 'oh Neil, be careful,' (makes car honking sound, laughs) then he's in the big city and it's like a country boy showing up in the city. (laughs) "Be careful, Neil!"

Then the journey ends at Massey Hall.

Young: Well you know I just it was a important moment in my performing life, the first time I played Massey Hall because it was the first time I really came to Toronto and played. It was an important thing, you know — my parents were there, my friends from school were there, I was coming back from from L.A. and Buffalo Springfield, you know from obscurity basically. And so maybe 40 years later I'm back in the same place. As we go get closer to the city we go to places that we lived — and we lived there a long time ago — and I'm just always commenting on, "Oh, this is gone, and they're tearing that down," and "They put a nuclear power plant here, and this is where my paper route used to be and now it's covered with subdivisions." It was like I had to go through my whole life to get back there, and...you know, you still arrive at the same place.