Pick of the week: Mark Wahlberg and his foulmouthed teddy bear

Pick of the week: In the blissful and vulgar "Ted," Seth MacFarlane shows the world how to make an R-rated comedy 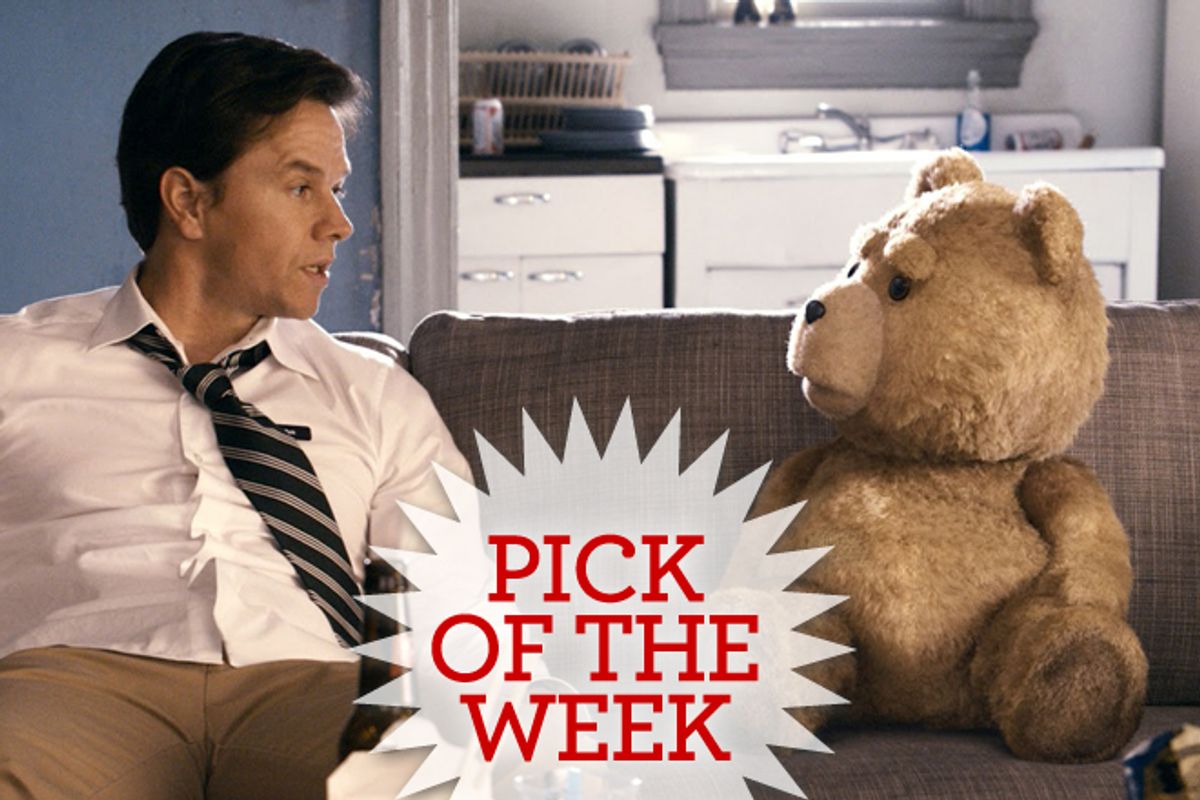 It's not mere coincidence that when Ted, the eponymous teddy bear-come-to-life voiced by co-writer and director Seth MacFarlane, invites a bunch of hookers over for a fun evening, the movie he puts on is Adam Sandler's "Jack and Jill." When his hapless roommate/owner (Mark Wahlberg) comes home with his disapproving girlfriend (Mila Kunis), surprising Ted partway through an especially disgusting party game with his female guests, the plush ursine delivers his movie review, in the New England growl familiar to viewers of TV's "Family Guy": "Sandler plays both a girl and a dude. It was unbearable! Unwatchable!"

Indeed, with "Ted" MacFarlane has thrown down the comedy gauntlet, most prominently before Sandler, but also before others we could name: You want to make a raunchy, hard-R farce, homeboy? Complete with a ludicrous premise, Boston-centric sports gags, random washed-up celebrity cameos, spoofs of several different kinds of more serious movies, an irrelevant third-act action sequence and a sentimental resolution? Step aside and see how it's done, my man.

I won't pretend even for a second that "Ted," which marks the first foray into feature film for MacFarlane -- creator of "Family Guy," "American Dad!" and "The Cleveland Show" -- doesn't indulge in cheap or vulgar gags. It positively revels in them, from a resentful Ted telling a prospective employer, in intimate detail, exactly how he had sex with the guy's wife, to Giovanni Ribisi playing a creepy, stalkerish guy whose secret vice is performing hoochie-coo Madonna-style dance numbers to the Tiffany video "I Think We're Alone Now."

But in a universe of Hollywood comedies that seem determined to insult the audience and pander to the basest form of post-adolescent fantasy, "Ted" feels almost sophisticated. Its funniest gags are verbal or conceptual, it winks at the audience without betraying its essentially likable characters, and it pulls a startlingly high proportion of laughs without ever making fun of fat women or gay people or going deep into toilet humor. (OK, there is that one prostitute in the Truth or Dare scene, who ... never mind.) Sure, this isn't my usual Pick of the Week fare, and this week also offers several outstanding upscale alternatives, including "Take This Waltz," "Magic Mike" and "Beasts of the Southern Wild," all of which I've covered or will cover. But, dammit all, the healthcare law survived the freakin' Supreme Court, and it's time to celebrate with a blissfully idiotic summer comedy, don't you think?

As for Mark Wahlberg in the so-called starring role of John Bennett, a formerly lonely child whose wish for his stuffed companion to come alive was miraculously granted one Christmas, I can safely say I never thought I'd see him playing the straight-man sidekick to an animatronic teddy bear. But as he was in the underappreciated cop comedy "The Other Guys," Wahlberg is golden as a hapless, befuddled dude, whose inability to grow up takes physical form as the foulmouthed, wisecracking plush toy who sits next to him on the sofa doing bong hits. (Ted has purchased a blend of weed from his dealer called "Mind Rape," suggesting that it sounds less sinister than the one called "This Is Permanent.") Stoned nearly all the time and barely getting by at a grade-C rental-car agency, John reacts to ordinary events with a wild-eyed intensity. When a co-worker shows up with a black eye, John asks him whether he belongs to "one of those, you know, secret gay beat-up clubs." (The answer, in fact, is not entirely clear.)

Do you really want me to explain how John's teddy bear comes to life in the first place? It simply happens, that's all, and MacFarlane rides it as far as it can possibly go. As Patrick Stewart's mellifluous opening narration informs us, magic has not entirely vanished from the world. In what presumably must be a coincidence, the plot of "Ted" is bizarrely similar to that of Sandler's painful recent flop "That's My Boy," in that the protagonist has survived a period of '80s celebrity before falling on leaner times. Little John's Christmas miracle was a big media story way back when, but now Ted, like John, is an adult (albeit one confined to the same cuddly, genital-free body) whom people sometimes recognize on the Boston streets: Oh, hey, there goes that live teddy-bear guy! I used to love him! Where Sandler calls upon Vanilla Ice, perhaps the funniest aspect of "That's My Boy," MacFarlane goes much deeper, sending John and Ted into a cocaine-fueled party night with Sam J. Jones, once the blond-hunk star of the 1980 camp classic "Flash Gordon."

MacFarlane gets in a few jabs at "Fight Club," as already mentioned, along with an action climax staged at Fenway Park that shamelessly mocks "The Town," Ben Affleck's overpraised and shticky Bahstan crime drama. Most of his satire, however, is directed at the tired dude-vs.-chick comedy formula, about the man-child who can't grow up and the long-suffering, unbelievably cute girlfriend (in this case, Kunis' professional-minded Lori) who yearns to bend his will into putting a ring on it. I guess when your lame boyfriend's bromantic roommate is actually a teddy bear, instead of Ryan Reynolds or whomever, the problem has reached a new level. (I don't bring up Ryan Reynolds completely at random! He's actually in this movie, although he never speaks, and so is Norah Jones, who does, telling Ted that he's pretty good in bed for a guy with no dick.)

But here's the real summer miracle of "Ted": Through all the dirty jokes and stoner humor and guessing games involving impressively long litanies of possible names for trashy Boston girlfriends --"Wait," says John to Ted, "is it one of those names with Lynn after it?" -- MacFarlane never loses touch with the basics. John and Ted really are best friends forever, even if they've gotten stuck in a Mind Rape-smokin', early-midlife rut, and Lori really does love John for who he is, teddy bear and all. Beneath the raunchy, drugged-out anarchy of "Ted" lies a fundamental sweetness and good nature, and MacFarlane even argues against the false dichotomy of those battle-of-the-sexes comedies. You can become a real grownup man (or woman) without wearing a suit or getting a $300 douchebag haircut, and without letting go of the passion and wonder of childhood. In fact, the very best grownups never do.