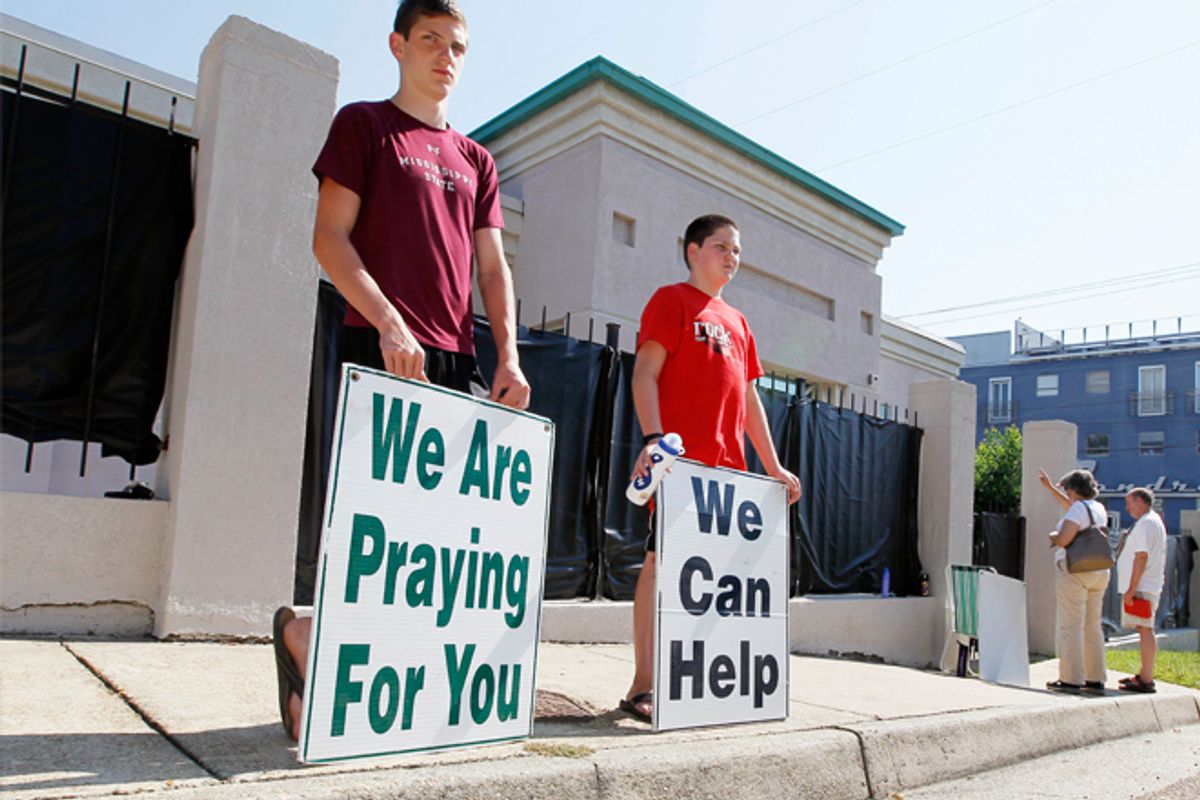 Twenty years ago, Mississippi had eight abortion providers. Thanks to a federal judge’s last-minute temporary stay of a law seeking to make Mississippi allegedly “abortion-free,” it still has one – for now. Another hearing on a preliminary injunction is scheduled for July 11.

This is despite the best concerted efforts of the state legislature and Governor Phil Bryant, who previously co-chaired the Personhood ballot measure, in practice the most recent effort of many to shut down Jackson Women’s Health Organization (JWHO). Bryant, you may recall, declared that if Personhood were defeated at the ballot box, “Satan” would win. Last night, Satan, having taken shape in the Mississippi electorate, made an apparent repeat appearance in the form of Judge Daniel P. Jordan III, a George W. Bush appointee.

Mississippi House Bill 1390, requiring that abortion providers have admitting privileges at hospitals, was specifically passed to target JWHO’s out-of-state doctors. It is unsurprisingly difficult to find a Mississippi-based doctor willing to deal with the sustained harassment on his or her doorstep, though JWHO’s clinic director told me when I was there in October that she knows several local pro-choice doctors who have at least considered it. The situation is sufficiently dire that one of the doctors who does fly in to Jackson is referred to in the complaint as John Doe MD out of concern for his safety.

If there’s any doubt that this is a regulation set up for the abortion clinic to fail, one of the hospitals didn’t even bother to send the doctors an application for admitting privileges, despite two months of requests. For its part, the clinic, backed by the Center for Reproductive Rights, has argued that the law is seeking to bar women from their constitutional right to an abortion.

That is transparently the intent, though — as any honest person in a country that has actually banned abortion will tell you — it’s rarely the effect. According to a 2011 Guttmacher analysis, Mississippi has the highest rate of unintended pregnancy in the nation and among the worst abortion access in the country. (Both Dakotas also have only one provider). In a Mississippi without an abortion clinic, the women with means can go to Memphis, New Orleans or Little Rock – many already do.

So it goes with many abortion restrictions. Mississippi was on the vanguard of a now-commonplace abortion restriction: It enacted a 24-hour waiting period in 1992. In the four years that followed, the overall abortion rate declined (as it did, dramatically, nationwide), but second-trimester abortions increased overall.

As for what will happen to the ones who can’t leave the state if the bill shuts down JWHO once and for all, the authors of the bill have already been quite open about how they feel about them. The bill’s sponsor, State representative Sam Mims, recently told Reuters that the prospect of unsafe abortion left him “not at all worried … My hope is that the women that are making these choices will now choose life, that they will realize that life begins at conception.”

It’s an elegant pronouncement, one that combines a farcical conception of “choice” and an utter contempt for women’s decision-making capabilities – women, many of whom are already mothers, that need Mims’s intervention for them to know what’s happening in their own uteruses.

But it was Mims's colleague Bubba Carpenter who in May made the implicit sadism most infamously clear. Several [sic]s should be applied to this statement: “Literally, we stopped abortion in the state of Mississippi, legally.”

Then he said, “And of course, there you have the other side. They're like, 'Well, the poor pitiful women that can't afford to go out of state are just going to start doing them at home with a coat hanger.' That's what we've heard over and over and over. But hey, you have to have moral values. You have to start somewhere, and that’s what we've decided to do. This became law and the governor signed it, and I think for one time, we were first in the nation in the state of Mississippi." At least he was honest.