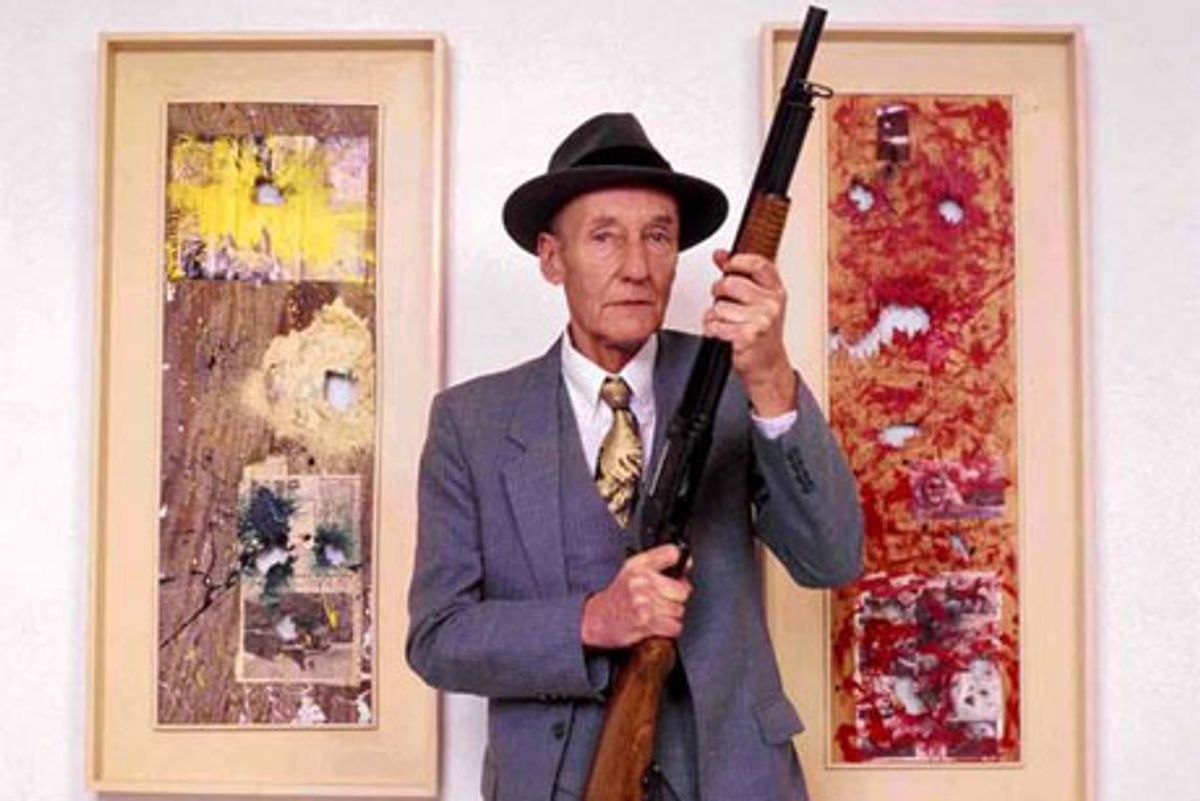 I attended the High School of Music and Art in Harlem, graduating in 1970. As one might expect, it was a place rich with talent. The program was split in two (as the name implies), and as I walked the halls, music would pour out from every corner. What I found interesting then was that many of the talents spilled over from one side to the other. I can’t speak to the visual art of the music students, as it was not so evident, but many of the art students were among the best singer-songwriters and rock musicians in the school. Indeed, our most famous classmate, Paul Stanley (née Stan Eisen) of Kiss, was an art student. I played in bands for fifteen years or so myself.

Of course, the musician-as-artist is not an uncommon idea. Bob Dylan, Joni Mitchell, Tony Bennett, John Mellencamp, Ron Wood, Patti Smith, Leonard Cohen, and even Paul Stanley are all known to paint. Less well-known is that the world’s literati also are cross-talented — that in addition to writing works that have shaped our culture, many poets and authors have practiced visual art as a vital component of their creative output. From William S. Burroughs and Charles Bukowski to Henry Miller and Sylvia Plath, renowned writers of the twentieth century made paintings, drawings, and collages. These creative outpourings enhance our understanding of their authors’ written works and stand on their own merits, as well. Some of the art is whimsical; Mark Twain and Kurt Vonnegut, for instance, were inveterate doodlers. Other examples — such as the work of e.e. cummings — is astonishing in its mastery. Here is a look at the visual output of 19 literary greats.

Sylvia Plath (1932–1963) studied art at Smith College. Her interest began as a child, and her attraction to design and fashion is in evidence early on. While at Smith, she became quite accomplished in various media, including oil, collage, and pen-and-ink. She created myriad scrapbooks filled with collage and artwork. For a time, she hoped her illustrations would accompany the stories and articles she wrote for publication.

Ever the provocateur, William S. Burroughs’s (1914–1997) most famous artworks were his gunshot paintings, made by targeting spray cans with a shotgun and splattering their contents onto blank canvases. Throughout his writing career, Burroughs created collages — and indeed, his most famous literary work, Naked Lunch, was a kind of collage itself. (Burroughs cut up the manuscript and reassembled the pieces randomly.) His interest in the visual extended into multimedia with the Dreammachine, a flickering light device meant to be viewed with one’s eyes closed, which he created in collaboration with Ian Sommerville and the artist Brion Gysin after reading William Grey Walt’s book The Living Brain.

In addition to his classic tales, perhaps Lewis Carroll (1832–1898, née Charles Dodgson) is best known for his photography. But he also drew throughout his life, illustrating Alice in Wonderland and Through the Looking-Glass himself (although the published books featured the work of illustrator John Tenniel). In addition, Carroll was a mathematician, a logician, an Anglican deacon, and an inventor. [On a related note, Print once asked four designers to storyboard their favorite scenes from Alice in Wonderland. --ed.]

[caption id="attachment_360771" align="aligncenter" width="600" caption="Miller decorated the wrapper for the typescript of Remember to Remember with this self-portrait (pen and ink, 1946)"]

Tropic of Cancer author Henry Miller (1891–1980) painted for most of his life, producing upwards of 2,000 watercolors. He was self-taught, and not just as an artist — Miller attended the City College of New York for only one semester.

[caption id="attachment_360801" align="aligncenter" width="378" caption="A cummings portrait of Marion Morehouse, who was a fashion model, a photographer, and his third wife"]

The poet e.e. cummings (1953–1962) created hundreds of paintings and drawings and wrote about art, as well. He fashioned line-art and caricatures for The Dial, an avant-garde literary journal published in Greenwich Village. He would paint in the afternoons and write at night. In 1931, he published a collection of his drawings and paintings, titled CIOPW (for charcoal, ink, oil, pencil, watercolor), and he showed his worked regularly at galleries in New York.

[caption id="attachment_360841" align="aligncenter" width="600" caption="Kipling's drawing for “How the Wale Got His Throat,” from Just So Stories"]

Rudyard Kipling (1865–1936) grew up around art. His father was a sculptor, a pottery designer, and a professor of architectural sculpture at the Sir Jamsetjee Jeejebhoy School of Art in Bombay. And two of his aunts were married to painters (Edward Burne-Jones and Edward Poynter). Rudyard worked in pen-and-ink; his Just So Stories, which combined his writing and illustrations, was published in 1902.

A self-taught artist, Charles Bukowski (1920–1994) created more than 1,000 paintings in his lifetime. As with his writing, these works display an art-brut vitality. He worked in any media at hand: acrylics, oil paint, watercolor, pastel, crayon, and pen. Many of these works were bound into first editions of his books from Black Sparrow Press.

[caption id="attachment_360891" align="aligncenter" width="398" caption="Kerouac’s pencil sketch for the cover of his breakthrough novel, On the Road"]

Like Bukowski, Jack Kerouac (1922–1969) was self-taught in the visual arts and produced paintings, drawings, pen-and-ink pieces, and sketches. His artwork exhibits the same spontaneity as his writing and shows evidence of the influence of the abstract expressionists he befriended, including Willem de Kooning, Larry Rivers, and Franz Kline.

Mark Twain (1835–1910, née Samuel Clemons) wrote essays on art and doodled in his journals, letters, and manuscripts, sometimes to entertain his children and sometimes for his own amusement. In addition, he used his artwork to secure patents for three inventions, including an "Improvement in Adjustable and Detachable Straps for Garments" (to replace suspenders); a history trivia game; and a self-pasting scrapbook coated with a dried adhesive that only needed to be moistened before use.

Kurt Vonnegut (1922–2007) also doodled in notebooks, and he created a combination self-portrait/signature that he would reuse often. He also produced incidental illustrations for his novels Slaughterhouse-Five (1969) and Breakfast of Champions (1973). His grandfather and his father were both architects, and later in life, Vonnegut began to take art more seriously, which eventually led to a one-man show at the Margo Feiden Gallery in Greenwich Village in 1983. In 1995, he created an Absolut Vodka advertisement as part of the company's American artists series. [See also: Seymour Chwast's great illustration of a Kurt Vonnegut quote.]

Edgar Allan Poe (1809–1849) tried his hand at drawing, making pencil sketches of his childhood sweetheart and eventual finacée, Elmira Rosyter, the inspiration for his poem “Lenore.” He also designed the cover to The Stylus, a literary journal he hoped to produce but that failed to gain financial backing.

The French poet Charles Baudelaire’s (1821–1867) father was a drawing teacher and instilled in his son a lifelong appreciation of art. In addition to creating his own art, Baudelaire wrote several essays of aesthetic criticism titled “Salons,” and he was a close friend of Édouard Manet.

[caption id="attachment_361091" align="aligncenter" width="593" caption="Arthur Rimbaud, “Three Citizens of Charleville,” drawn on the back of a map of India when he was 15 years old"]

Although he abandoned poetry by age nineteen, Arthur Rimbaud (1854–1891) continued to draw throughout his life. An inveterate world traveler, Rimbaud made many of his pencil sketches on the backs of maps.

Another world traveler, Joseph Conrad (1857–1924, born Józef Teodor Konrad Korzeniowski) recorded his travel experiences through art. In contrast to his exploration of humanity's dark side in books like Heart of Darkness and Lord Jim, Conrad's pen-and-ink work displays a light, refined line.

As a young child, the Spanish poet, playwright, and theater director Federíco Garcia Lorca (1898–1936) played piano, sang, acted in plays, and decorated his letters and writings with fanciful drawings. Friends with the surrealists Luis Buñuel and Salvador Dalí, Lorca drew throughout his life. He also collaborated on a puppet theater with the painter Manuel Angeles Ortiz.

The Victorian poet Elizabeth Barrett Browning (1806–1861) was home-schooled (and the eldest of twelve children). She would decorate the inside of the covers of her notebooks of poetry with pen and ink.

The Irish playwright George Bernard Shaw (1856–1950) spent three years as an art critic for the London World. In addition to doing costume and stage design, he was an amateur photographer, drew numerous lighthearted cartoons and caricatures in pen and ink, and also worked in watercolor.

It is well known that Dylan Thomas (1914–1953) spent much time in pubs. What is less well-known is that he would entertain his companions by drawing caricatures of the other patrons on napkins.

[caption id="attachment_361211" align="aligncenter" width="600" caption="H.G. Wells's sketch of himself giving a talk at the Royal Institute, 1902. “I regard this picshua as a masterpiece only to be compared to the Paleolithic drawings in the Caves of Altima.”"]

The author and science fiction pioneer H.G. Wells (1866–1946) never took his artwork too seriously, but he kept a diary in the form of humorous drawings, numbering in the hundreds. He called them “picshuas”: "silly little sketches about this or that incident which became at last a sort of burlesque diary of our lives.”

[caption id="" align="aligncenter" width="600" caption="Wells, from a letter to his mother: “You observe a doubtless familiar figure above, keeping his 26th birthday.”"]

For more drawings and sketches by creative minds, check out the book An Illustrated Life: Drawing Inspiration from the Private Sketchbooks of Artists, Illustrators, and Designers, now on sale at MyDesignShop.com.

Copyright F+W Media Inc. 2012.
Salon is proud to feature content from Imprint, the fastest-growing design community on the web. Brought to you by Print magazine, America's oldest and most trusted design voice, Imprint features some of the biggest names in the industry covering visual culture from every angle. Imprint advances and expands the design conversation, providing fresh daily content to the community (and now to salon.com!), sparking conversation, competition, criticism, and passion among its members.