When I discovered what Ben had been keeping from us, I realized how much he needed to be part of our family 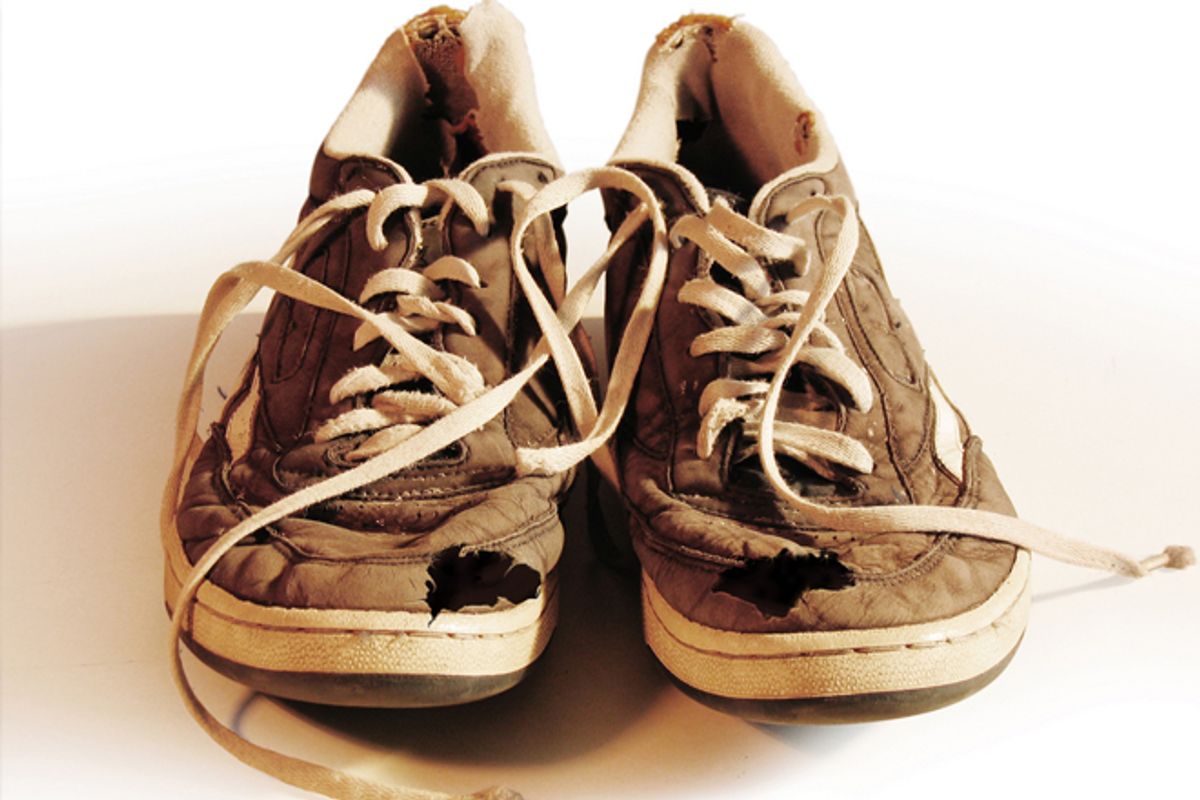 At bedtime on the day that we adopted our nine-year-old son, he said, “Look at my feet.” Ben sat on the hallway stairs and pulled off his socks.

Welcome to motherhood, I thought, backing away as Ben turned the soles of his feet toward my husband and me.

“No, I don’t need to touch them,” I answered calmly, then snapped, “Don’t you touch them either!”

I did not say, “Because those are the most disgusting things I’ve ever set eyes on outside of that little dog we passed after it had been attacked by that big dog and the little dog’s eyeball was hanging out of its socket.”

I answered, “Because that looks contagious.” As in, I am repulsed that I’ve been walking the same floor as those infectious mushroom plantations. As in, you would not want to get whatever’s on your feet anywhere near your privates or scalp. “How long have they looked like that?”

“Mm, a couple of weeks?” Ben had no concept of time, but suffice it to say this meant his feet had looked leprous for a good long while.

“Why didn’t you say anything until now?”

He didn’t say, “Because I thought you’d call off the adoption if you saw that my feet look like a disease only Jesus could heal.” Still, the timing couldn’t be a coincidence. He’d harbored this secret until we’d signed on the dotted line, crossing our T's and dotting our I's. Until the Return and Exchanges Policy with the state’s foster care system had expired. He was ours forever now, and he knew it. He had a new surname, which my mother had engraved on a silver bracelet that he now wore around his wrist. (Ben is not his real name.)

We had been trying to discover the source of the smell in our house for a week. We had settled in for a movie on Christmas Eve but changed gears when we all looked at each other to see who had passed gas; no one had. I washed the blankets on the couch. I thought the dog had rolled in something and tracked it onto the rug or the throws that Ben sometimes let drag on the floor.

The odor lingered the next day. We all checked the bottoms of our shoes. I vacuumed and mopped. I wondered if something had died in our walls. Ben’s bedroom smelled ripe, but wasn’t that just the normal smell of active boy? He bathed every day, but that amounted to his lower half getting damp as he focused his energies on singing in the tub and splashing water onto the floor. I washed all of his bedding in hot water. I propped his door open so the room would air. I washed everything in the house that was washable. The smell diminished, and I thought I wouldn’t have to call in a professional cleaner for the couch and rugs.

After Christmas dinner the next day at a friend’s house, the topic of ambergris as a stabilizer in perfume came up. Our host’s boyfriend described ambergris — solidified whale vomit — as smelling similar to gunk flossed from between neglected teeth. Just as he said this, Ben took off his shoes, and it was as if he’d conjured the funk of a decomposing whale.

“Oh my LORD,” I barked from behind cupped hands, “put those shoes back on right now!” We beat a hasty exit and threw the shoes away in the outside garbage bin when we got home. We thought the problem was the shoes, which Ben tended to keep wet by jumping into puddles. We gave him new shoes. Problem solved, we thought again.

We never thought the problem was the boy himself. In our defense, we were a tad distracted with the adoption court hearing less than a week after Christmas. We had out-of-town relatives flying in, a huge party to plan, and mounds of paperwork and scheduling to do. And I didn’t know that a stench like this could come from a human body. Not a live one, anyway.

More experienced parents might have thought to check the child himself, having grown used to expert detection during the first year of their child’s life when they had to figure out why baby was screaming, solving for x and y without knowing the equation. Soiled diaper? Upset tummy? Hot? I hate the wall color? Barney sucks, gimme Pink Floyd?

But we’d never had to hold a baby’s bottom up to our shnozzes to sniff for evidence of one job done and another in need of doing. We had no other children and had parented Ben since he was six, an age at which he was already marginally self-sufficient. He arrived on our doorstep able to say, “I’m hungry,” or “I’m tired,” or “Turn your dumbass music off now.” He bathed and dressed himself and expected a certain amount of privacy. I, his own mother, had rarely glimpsed his bottom and private parts and just as infrequently saw the bottoms of his feet.

But mostly we weren’t used to Ben keeping his ailments a secret. Normally he was a walking bullhorn when it came to the slightest perceived damage to his person. He could use his words to tell us exactly what was wrong at any given moment. In fact, he told us and the adults in his life that a lot of things were wrong even when they weren’t, which led to him throwing up in the middle of his first-grade classroom because no one would believe him when he said his stomach “hurted.”

When the school nursing staff finally cut him off from ice packs and Band-aids, it was like a junkie going off heroin. We knew about every paper cut he’d received and every nudge he’d been persecuted with. We never told him when we were sick because he’d display the same symptoms, whether he had them or not. He once fell off his bike down the street and picked himself back up and started home, but when he saw a car approaching, he threw himself back down again and pretended to be mortally wounded.

So this was new, his keeping a real problem a secret. Why didn’t he tell us, since he loved the idea of medicines, ointments, thermometers, bandages, tourniquets, crutches, curative-kisses and ambulances, to the point that I almost never give him anything? If he was given a single aspirin, he would fabricate ongoing pains in order to get another dose. I stopped his daily vitamin cold turkey because he behaved liked an addict over it. Chewable Flintstones, I could understand, but he was desperate every morning just to hold that gel pill in his hand before tossing it back. It wasn’t a huge leap to his someday tying off and finding a vein.

After we tucked our newly forever son and his putrid piggies into bed that night, I spent an hour online viewing graphic and disturbing photos of athlete’s foot and reading about how to cure it. I’d spent a similar unappetizing bedtime hour online a few years prior when I searched online for hydrosalpinx, which my doctor mentioned might be causing my infertility, and I had shot my rolling office chair backwards across the room when the first disgusting image of one popped up on the screen.

But aside from how to treat the fungal skin infection, the bigger question haunted me: Why had he kept this very real problem a secret when he was normally so vocal about illness and injury? Had he really thought of himself as damaged goods that might be returned to the factory? Perhaps not consciously. But, yes, the answer had to be yes.

Once he showed us his feet, he had also told us that they itched. Madly itched. As he told us, he began to claw at his feet like Humphrey Bogart frantically pulling off leeches in “The African Queen.” He had restrained himself from scratching for possibly weeks. On this happiest of happy nights, a wet wool blanket of melancholy sogged itself over me. We were his parents. Despite his hypochondria and addictive behaviors, it was our job to keep him safe and healthy, and we couldn’t do that if he didn’t feel secure with us — to trust that we would take care of him instead of turning him back over to the state when a real problem emerged.

But I also felt relief. We had been warned that older children up the ante on destructive behaviors as their adoption date approaches. It’s the kids’ way of taking control: If this was going to fall through, it would be on their terms, so they fling everything in their arsenal at well-intentioned parents’ defenses. The testing period was no small part of why one in five adoptions of children over age six falls through. Our neighbor’s close friends recently turned their son back over to the state just before his planned adoption. Ben’s biological sister sabotaged her own adoption and was moved again, two months shy of her thirteenth birthday.

We had wondered whether we should tell Ben that we were finalizing his adoption. We had determined to call it the Stealth Adoption. If the thought of adoption threw these kids for a loop, then why not keep mum until the deed was done? I wondered why more parents didn’t think of this?

Fortunately, the overshadowing Christmas took care of the Stealth Adoption for us. Ben was so focused on presents and the break from school that he hadn’t seemed to give much thought to the adoption, other than wanting to know if we were going out for pizza that day.

Except that apparently he had been thinking about it. Far from disrupting the adoption with negative behaviors, Ben had done just the opposite. He’d withheld what would normally have propagated significant attention.

The foot fungus we would intermittently eradicate, though, like Ben’s past, it would return to haunt and challenge us. A spore is adapted for surviving extended periods of time in unfavorable conditions. That Ben had done. Only time will heal Ben’s doubt that we — his twelfth family, more tenacious than fungal spores — are here to stay. There is no magic cure for either; there’s only persistence.

Jennifer D. Munro’s work has appeared in more than 60 journals and anthologies, including Brain, Child; North American Review; Zyzzyva; "Best American Erotica"; and "The Bigger the Better the Tighter the Sweater: 21 Funny Women on Beauty and Body Image." Her collection of 12.5 humorous stories about sex and the sexes is entitled "The Erotica Writer’s Husband." Website: www.munrojd.com. Blog: www.StraightNoChaserMom.com.