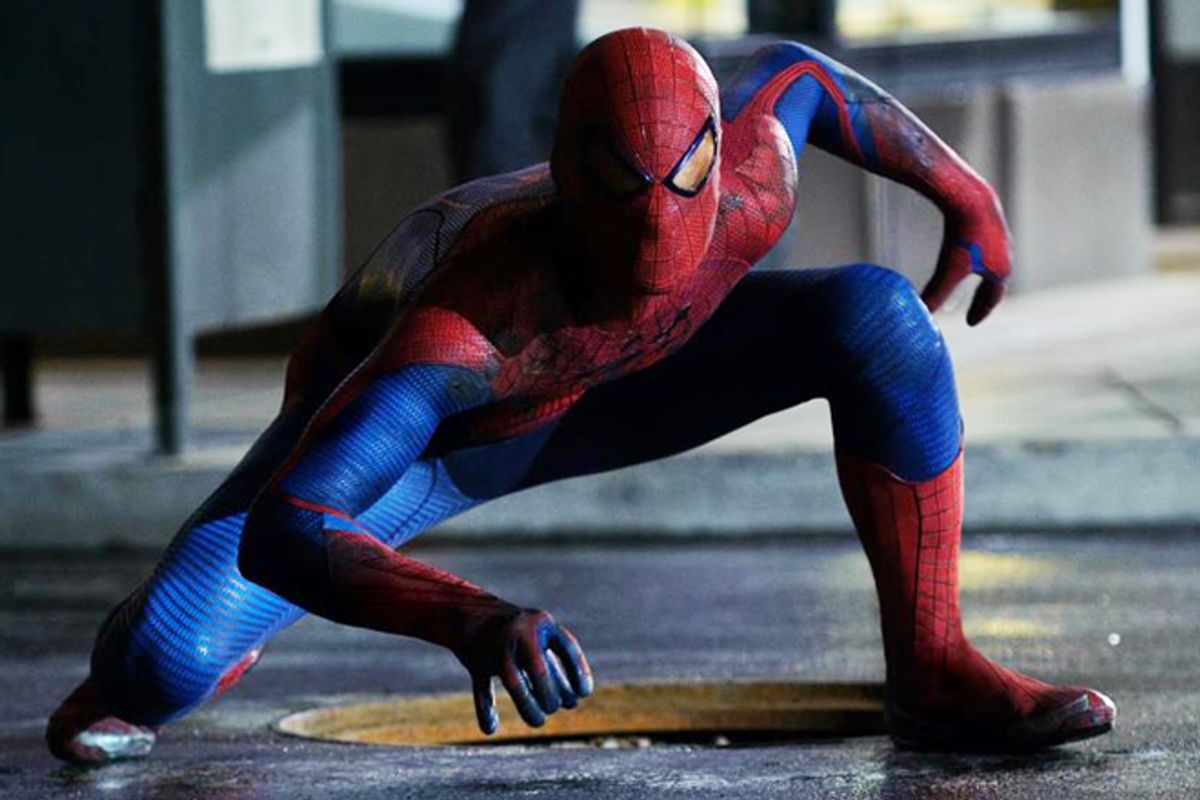 Andrew Garfield in "The Amazing Spider-Man"
--

Look, I realize it's silly to cop an attitude about the decision to relaunch the "Spider-Man" movie series with a new cast of actors and a somewhat different origin story for the fabled web-slinger. Pop culture reinvents itself even more ably than capitalism-at-large does. (Actually, capitalism-at-large is having some problems with that at the moment.) That goes double for comic-book characters, the ersatz gods of our age, who get spread diffusely across a wide range of media and audiences until they stop being characters at all and become a Heisenbergian smear of uncertainty. In what sense can the Batman of the 1930s Detective Comics series, the Adam West Batman of early 1960s camp television and the Christian Bale Batman of "The Dark Knight" be said to be the same "person"?

It might go triple for Spider-Man, who is a full generation younger than Superman or Batman and has a particular cultural resonance they do not. All efforts to splice complexity, ambiguity and doubt into the personality of those classic DC Comics heroes -- while perhaps laudable in narrative terms -- are essentially heretical. In their most classical forms, Superman and Batman are suit-clad adult men hardened by the Depression, psychologically impregnable and physically unbeatable. If they belong to the Greatest Generation, Spidey is a baby-boomer who sprang to life as an anxious teenager in early 1960s New York just as the city and the country and the culture stood on the precipice of enormous transformation.

From the very beginning, Marvel's Spider-Man comics had an element of teen melodrama, and there was a tension between the comic-book universe and the real world that was unprecedented and then widely imitated. Peter Parker was much, much closer to being a comics reader than Clark Kent or Bruce Wayne could ever be, and something about that strong sense of identification between Spidey and his fans has sparked an ever-metastasizing universe of alternate plot lines and possibilities. I'm not nearly enough of a fan to grasp all of them, but even in the "mainstream" Spider-Man story, Peter's marriage to Mary Jane Parker was erased from memory after many years, dead characters were resurrected and the "timeline" was rolled back. Let's not even go into the universes where Spider-Man is Korean or Latino or a flesh-eating zombie or a psychopathic killer or an Elizabethan apprentice spymaster.

While there has been tremendous discussion among historians and scholars about the contributions of Marvel Comics legends Stan Lee, Steve Ditko and Jack Kirby in creating Spider-Man, as well as about the numerous possible sources of inspiration -- a pulp-magazine crime-fighter called the Spider, an Archie Comics hero called the Fly, a 1950s character prototype called the Silver Spider, and even a 1947 one-off villain actually named Spider Man -- one obvious source is often overlooked. Orphaned high-school wunderkind Peter Parker made his first appearance in print about a decade after the publication of "The Catcher in the Rye," at the very height of J.D. Salinger's fame and influence. Solitary, haunted by guilt and sworn to defend the weak, Peter is a virtual clone of Salinger's Holden Caulfield, albeit with a fantasy alter ego Holden lacks.

Holden's famous soliloquy about where the Central Park ducks go in winter when the park's southern lagoon freezes over -- this was in the years before global warming, when the lagoon actually did freeze over -- would make a perfect Peter Parker thought balloon, almost word for word. And I can see this passage translated into a couple of panels in a late '60s or early '70s Spider-Man comic when Peter takes a wintry afternoon stroll through Manhattan while he's on the outs with Gwen or Mary Jane or whatever girl it is at the moment:

While I was walking, I saw these two guys that were unloading this big Christmas tree off a truck. One guy kept saying to the other guy, "Hold the sonuvabitch up. Hold it up for Chrissake!" It certainly was a gorgeous way to talk about a Christmas tree.

I guess the mask is officially off the Spidey-Holden connection, given that Andrew Garfield, who plays the title role in "The Amazing Spider-Man" (which is certainly intended to launch a new series), has made it explicit: "Peter Parker has been the one fictional character I related to growing up, that and Holden Caulfield." This seems odd, given that Garfield was born in 1983 and mostly grew up in England (although he's American by birth), but it certainly provides a key to his alternately strained and ingratiating performance, with its sense that Peter can't quite stand anything about ordinary life and remains pissed off at everybody the entire time.

Since I've made you wait this long for any sort of review of "The Amazing Spider-Man," here it is: Pretty good summer flick! A non-insulting, generally likable retake on Spidey's origins that is somewhat closer to the original comic books and is geared particularly for teens and older tweens. Director Marc Webb actually shot it in 3-D (instead of converting after the fact), and as with "Prometheus" and "Hugo," the difference is enormous. I suppose it's typical that, just as Hollywood has beaten the whole 3-D thing to death, directors are starting to figure it out. But all the excellent supporting players in this movie -- Emma Stone and Rhys Ifans and Martin Sheen and Sally Field -- are pretty much afterthoughts to Garfield's angsty, glass-chewing central performance. And once you get around to asking why this movie should exist in the first place, only five years after Tobey Maguire and Kirsten Dunst and Sam Raimi made "Spider-Man 3," it's pretty clear that there's no answer. (Or, at least, none that doesn't involve a number with lots of zeroes at the end.)

I've always liked Garfield in his British roles, which included a Holden-esque turn as the troubled, ex-convict protagonist of "Boy A," but the problem with him playing Holden-as-Spidey is that he's following Maguire, an actor who pretty much has Holden Caulfield in his veins instead of blood. Garfield is simply too tall and good-looking, with his perfect hair and lean, athletic frame, to pull off Peter as a science nerd and social outcast. But that same degree of non-realism, that sense that the movie is set not in the present or the past but in some vague, imaginary in-between, plagues all of "The Amazing Spider-Man." Peter and his comely, thigh-high-clad Gwen (Emma Stone) chat by smartphone, and one-armed scientist Curt Connors (Rhys Ifans) has a lab that sports all sorts of cool, high-end computer imaging tools. But this is a version of 2012 by way of Spidey's 1962 origins, where the outer boroughs of New York are still populated by working-class Anglos like Peter's Uncle Ben (Sheen) and Aunt May (Field), and the street thugs all look like those stringy-haired white guys in leather jackets you'd see in a burglar-alarm commercial. (Not to mention that Peter and Gwen's ostentatiously fake "Midtown Science High School," or whatever it's called, is clearly in Los Angeles.)

I'm not necessarily saying that I want a fully social-realist Spider-Man universe with Mike Bloomberg and Al Sharpton playing themselves and Peter as a gay, Urdu-speaking immigrant or something. (Although, come to think of it, that might be cool.) I'm not necessarily questioning the decision to ditch the Raimi franchise and start over, since those movies, at least arguably, had run out of creative gas by "Spider-Man 3." I am saying that the Raimi movies had bright primary colors, exaggerated production design and amped-up CGI effects that bespoke a distinctive artistic signature, while this one feels intentionally indecisive and constructed by committee. (The writers include James Vanderbilt, Alvin Sargent and Steve Kloves.) It's a generally agreeable and occasionally exciting picture, but one with major plot holes, hit-and-miss effects and a dedication to pleasing everybody and alienating nobody. I could almost take my eight-year-old son to it (and may do so, after the proper preparation). It will make a lot of money and be rapidly forgotten, and soon enough Spider-Man will be reincarnated in some other guise.