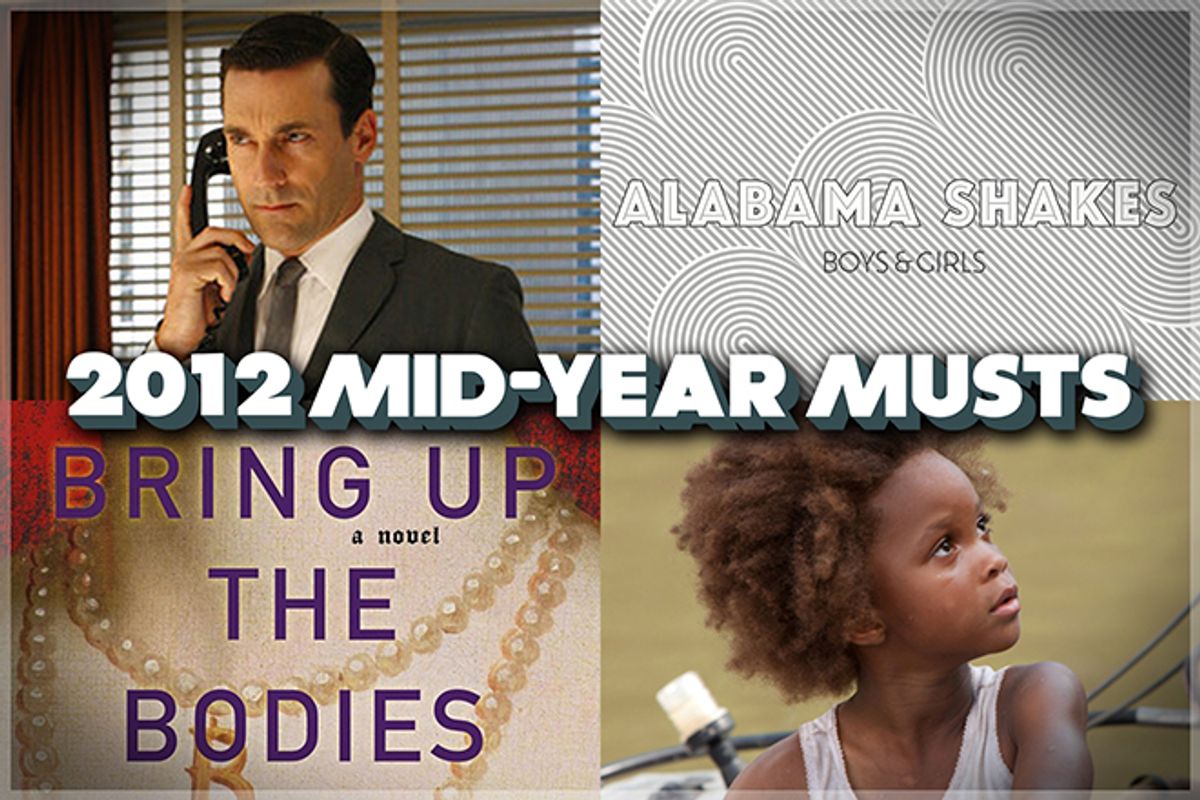 ESSENTIAL (As good as your cool friends say)

LISTEN Alabama Shakes, "Boys & Girls." You know that band that all your friends told you that you had to hear, and then you heard them and you told all your friends they had to hear them, and then they got famous and you were a little pissed about it? Alabama Shakes is this year's version of that band. Their critically lauded debut album, "Boys & Girls," lived up to all the hype -- a soulful, bluesy jolt of passion and smolder. Just the thing for those sultry, much too short summer nights. -- Mary Elizabeth Williams

READ "Bring Up the Bodies" by Hilary Mantel. Hilary Mantel's follow-up to her Man Booker Prize-winning 2009 novel, "Wolf Hall," is a high-wire act, a feat of novelistic derring-do. As with "Wolf Hall," the central character in "Bring Up the Bodies" is Thomas Cromwell, master secretary to King Henry VIII of England, typically depicted as a ruthless schemer. The son of a drunken, abusive blacksmith, Cromwell has risen about as high as any commoner could hope to, entirely on the strength of his acumen, industry and resilience. Now he's got to get rid of Anne Boleyn, the wife Henry broke with the Vatican to wed. It's a dirty job, and Mantel carries the reader into some harrowing territory, forcing us to hang onto our sympathy for Cromwell by our fingernails. It's a tour de force. -- Laura Miller

WATCH You’ve heard it before, but we’ll say it again: If you’ve been holding out on “Mad Men,” stop it. Every episode of this bravura season — except maybe the last one — contained a deliriously over-the-top moment to complement all the carefully observed character work. Turn it on for the “Zou Bisou,” stay for Roger Sterling’s acid trip, and leave crying about poor Lane Pryce. -- Willa Paskin

LISTEN Best Coast, "The Only Place." In a musical sense, Best Coast’s Bethany Cosentino is following in Liz Phair’s footsteps. The latter woman found fame as a lo-fi indie queen and then gravitated toward her true love — mainstream pop — as her career progressed. Similarly, Cosentino sounded wobbly and shy on Best Coast’s early tunes, which tended toward raw garage fuzzballs. However, "The Only Place" reveals she’s a California girl at heart who adores sun-kissed hooks, country pop and Fleetwood Mac. Well-produced and polished (but not overly glossy), the album touches on the Beach Boys’ pop glimmers, strident torch songs and brisk rock 'n' roll jangle. Cosentino’s self-assured coo — a luminous combination of Neko Case, Letters to Cleo’s Kay Hanley and Patsy Cline  — soars over the music, whether she’s fighting off homesickness or trying to figure out where she is, both literally and figuratively. Introspective without being precious, "The Only Place" is ace. -- Annie Zaleski

WATCH "Beasts of the Southern Wild" A fantastical fable set in the bayous of southern Louisiana and featuring a child protagonist, a Katrina-scale storm and a posse of prehistoric beasts set loose by the melting icecaps, this exhilarating and profoundly strange debut feature from New Orleans-based writer-director Benh Zeitlin already feels like one of the summer's big talking points. Is it a brilliant cinematic breakthrough and an icon of the New Sincerity movement? Is it too clever by half, and calculated to please big-city audiences yearning for an imaginary Huck Finn America? Is it fundamentally condescending, even bordering on cultural imperialism? (OK, that's a straw man. I don't think anybody has said that yet, although someone will!) See the season's breakout indie hit for yourself and jump into the debate! Actually, you should mainly see "Beasts" because it spins a crazy, messy tall tale, because it's a delightful work of visual and design imagination, and because the nonprofessional leads (6-year-old Quvenzhané Wallis as the scrappy protagonist and Dwight Henry as her dad) are amazing. -- Andrew O'Hehir

READ Jess Walter, "Beautiful Ruins." Jess Walter has already proven that he's one of our great comic writers ("Financial Lives of the Poets"), a cerebral postmodernist ("The Zero") and a savvy plotter of thrillers ("Citizen Vince"). Now he has his masterpiece, "Beautiful Ruins," and interlocking, continent-hopping, decade-spanning novel with heart and pathos to burn, all big dreams, lost loves,  deep longings and damn near perfect. -- David Daley