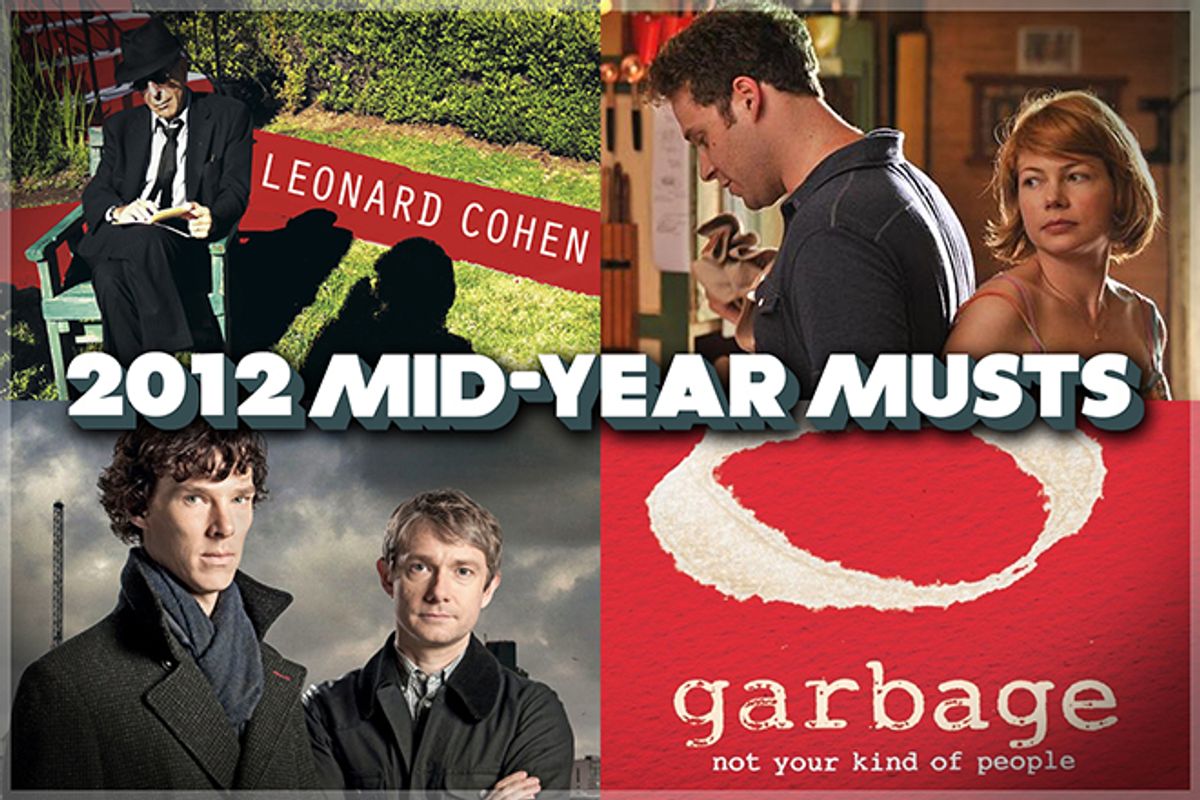 WATCH "Take This Waltz." There are so many movies, big and small, competing for your attention this summer, and I'm worried that actress-turned-filmmaker Sarah Polley's brilliant second feature, starring the terrific Michelle Williams as a young Toronto married woman drawn into a fateful flirtation, will get filed under "indie chick flick" and ignored. Let it not be so, ladies and germs! "Take This Waltz" is a frank, sexy, funny, daring comedy with tragic undertones, that pushes the female-centric relationship movie into startling new territory and establishes Polley's budding-genius credentials. Her dialogue has terrific energy and insight, and her ear for pop music -- often the downfall of indie directors, with their reliance on emo whining -- is just as good. This might be Williams' best performance, and she's matched by Seth Rogen (underplaying nicely as her cookbook-author husband) and Luke Kirby, playing the rickshaw-pulling sexy Other Guy. "Take This Waltz" is absolutely not a girly-weepy movie; it's a highly ambitious thrill ride with a protagonist you can't trust to make the right decisions and who ends up, like all of us, trapped between the real and the possible, the what-is and the what-might-have-been. -- Andrew O'Hehir

LISTEN Garbage, "Not Your Kind of People." Seven years away from the spotlight hasn’t dulled Shirley Manson’s ire. “I won’t be your dirty little secret,” she rages on "Not Your Kind of People," Garbage’s first album since 2005’s "Bleed Like Me." “Not for you, not for me, not for your other lover.” Despite her stubborn fury — and, on other songs, delightfully vicious scorn — Manson is far from a caricature. She expresses deep longing, rages against infuriating helplessness, struggles with loss and embraces feeling alienated — in short, reinforces that women in music can be multidimensional, complex beings. The music on "Not Your Kind of People" suits her many moods. Garbage’s core sound hasn’t changed much; they’re still adept at slamming metallic electronica (sledgehammers “Man on a Wire” and “Automatic Systematic Habit”), industrial-perforated synth weirdness (“Battle in Me”), ‘90s dreampop (“Felt”) and tranquil down-tempo seductions (“Sugar”). Still, the exuberant aggression of the album — and its fearless palette — is a welcome breath of fresh air. -- Annie Zaleski

READ "Behind the Beautiful Forevers" by Katherine Boo. The result of intensive, immersive observation over the course of four years in a Mumbai shantytown, this masterpiece of narrative nonfiction reads like a great 19th-century novel, bursting at the seams with memorable characters. Boo, one of the greatest journalists of her generation, refuses to treat any of the half-dozen principle figures as examples of their class. The whole point of the book, as Boo states in an interview with her editor included as an afterword, "is to portray these individuals in their complexity -- allow them not to be Representative Poor Persons." Ambition, betrayal, self-sacrifice and phenomenal strength all play a part in who survives to the next day or succeeds in leaving the slum. It seems almost unbearable not to know whether any of them will succeed. We can't. What happens next can't be told because it's still happening, right now. -- Laura Miller

LISTEN Leonard Cohen, "Old Ideas." Leonard Cohen’s most recent world tour was a meticulous, well-orchestrated affair; accordingly, each show felt like a communal cathartic experience. His 12th studio album, "Old Ideas," is much more intimate. Cohen’s overnight-radio-DJ baritone anchors velvet-lined songs inspired by jazz, blues, folk and country. Trilling background vocals from the Webb Sisters and other light touches (feathery percussion, lounge piano) further add levity. Although the title can be read as a somewhat-cheeky nod to old age — Cohen is 77, after all — the sentiments contained within are anything but stodgy. Mortality pops up occasionally; so do tales of the power struggles and everyday disagreements within relationships, and even the comedown from a poisonous romance. Above all, "Old Ideas’" lyrics are still very much alive with possibility — and even humor: The narrator of “Going Home” is a higher being who doubles as Cohen’s creative puppeteer. -- Annie Zaleski

WATCH “Sherlock,” the British updating of Sherlock Holmes starring the otter-ific Benedict Cumberbatch, is the TV equivalent of the perfect beach read: fun, addictive and yet not stupid at all. Cumberbatch’s Sherlock is an autistic, captivating, prickly genius who talks a mile a minute and has gobs of disdain for just about everyone, except maybe his bestie Dr. Watson. The two solve crimes based on the OG Sherlock Holmes stories, and icons from the Hounds of Baskervilles and a smoking hot Irene Adler to a blood-chilling Moriarity all make their appearances. (The Adler episode in particular is a frothy good time.) Be warned that the series ends on a serious cliffhanger, but that should just get you excited for next season. -- Willa Paskin