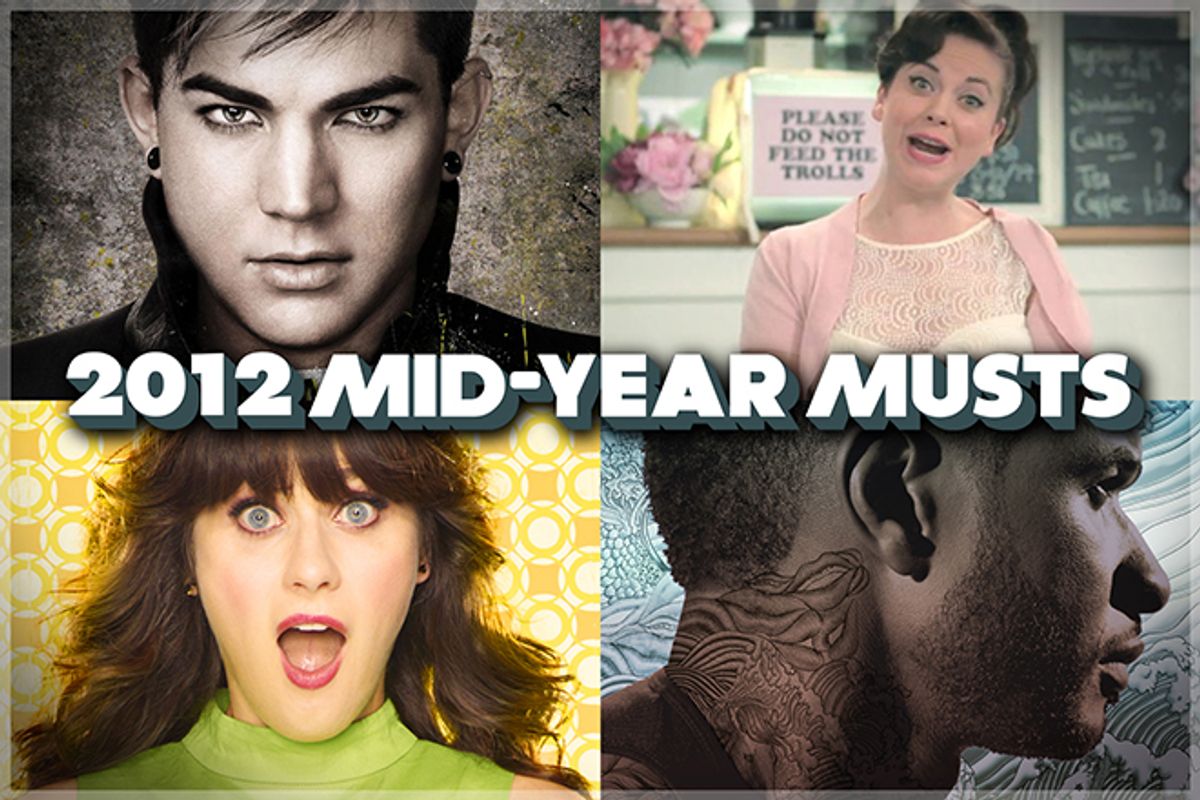 YES, REALLY (Because culture should be fun, take these things seriously)

LISTEN Adam Lambert, "Trespassing." Adam Lambert is one of the few pop stars with the chops to craft cohesive albums, not just indelible singles. "Trespassing" is a sleek collection encompassing retro-minded funk, slinky disco, hi-NRG techno, robo-pop and soulful ballads. More impressive is Lambert’s versatility: He’s such a talented vocalist, he can handle sensitive tunes and dance-floor jams without missing a beat. On the kaleidoscopic synth-pop surge “Broken English,” he channels a young Simon LeBon; on “Shady,” he pants, vamps and seduces over an inimitable liquid groove from Nile Rodgers. And the album’s glammy title track, which sounds like “Another One Bites the Dust” at Studio 54, more than validates his side gig as Queen’s lead singer. -- Annie Zaleski

WATCH There are those who hate “New Girl” out of hand, because the adorkable Zooey Deschanel drives them wild and not in a good way. But what started out at as The Zooey Is a Strange Wide Eyed Helpless Creature Show has changed into one of the best, funniest ensemble sitcoms on television, buoyed along by Zooey, who has gamely pulled back on her shtick, and the two superb actors who play her male roommates Schmidt and Nick (Max Greenfield and Jake Johnson, respectively). The preening Schmidt and the broken Nick are perfectly cast supporting characters, and they have helped make “New Girl” huge-hearted, ridiculous and hilarious, however you feel about Zooey. And when you’re done with “New Girl” you can catch up on the other best late-20, early-30-something comedic ensemble on TV, the fast-talking, slightly deranged crew of “Happy Endings,” featuring Brad and Jane, the best married couple on TV, played by the high-strung Damon Wayans Jr. and the even more high-strung Eliza Coupe. -- Willa Paskin

WATCH "Thank You Hater!" A witty retort to trolls everywhere, Isabel Fay's saucy ode to bottom-feeding commenters is the most satisfying thing anyone who's ever been scorched online will ever watch. When she cheerfully croons to all the "sexually aggressive, racist, homophobe, misogynistic, cowardly, illiterate, wastes of human skin" out there, it's like balm on all the burns. Best of all, proceeds from the sale of the song go to the Beat Bullying campaign. Not a moment too soon. -- Mary Elizabeth Williams

LISTEN Usher, "Looking 4 Myself." R&B superstar Usher touted the idea of “revolutionary pop” as he was making "Looking 4 Myself." “I'm a consumer of culture and love mixing styles and inspirations, both in my music and my style,” he told Stylelist by way of explanation. His seventh album does show remarkable agility — and complete willingness to subvert any and all genre restrictions. The title track has a smooth Hall & Oates vibe; with help from Swedish House Mafia, “Euphoria” and “Numb” cull from Swedish technopop; “What Happened To U,” appropriately, channels Prince; and a techno-fied sample of Billy Joel’s “Uptown Girl” snakes through “Can’t Stop Won’t Stop.” Even tracks that emphasize Usher’s most potent talent — that would be a heavenly falsetto — eschew convention. Minimalist digital ephemera blips through “Climax,” while “I Care 4 U” has dubstep-inspired stutter-step production and “Twisted” is a rhythm-buckled soul revue. Wildly creative and nuanced. -- Annie Zaleski

WATCH "Chico & Rita." An animated film in Spanish that's absolutely not for kids (unless your kids are good with R-rated sexy time), this dazzling tale of lost love and musical revolution posed an insuperable marketing challenge for North American audiences, and remains the year's biggest undiscovered delight. If Paul Gauguin had ever collaborated with Dizzy Gillespie, this would be the result: From the brilliant tropical colors of postwar Havana to a wintry, monochrome Manhattan (and onward to Hollywood, Paris and Las Vegas), "Chico & Rita" is a wonderland of visual delights, driven along by the finger-popping jazz, Latin and pop score from 93-year-old Cuban musical legend Bebo Valdés. But please don't convince yourself that "Chico & Rita" is some niche product for animation buffs and Latin-jazz fans; the niche for this wondrous work (from Spanish filmmaker Fernando Trueba and the artist-designer team of Javier Mariscal and Tono Errando) includes anyone who's interested in music or art or love or movies or Cuba or America or the cultural history of the 20th century. It's that good; in fact, it's that great. (While the DVD won't be out until September, you can get the terrific soundtrack now, on MP3 or CD.) --Andrew O'Hehir

FOLLOW Jenny Holzer, Mom. What, another parody Twitter account? We know, but there's just too much irresistible genius in the reinvention of the woman who's been dispensing short-form wisdom electronically since before the dawn of social networking as an all caps everymom. Now if only we could project "MISTAKES AREN'T MISTAKES IF YOU LEARN FROM THEM SO I HOPE YOU LEARNED SOMETHING FROM THAT HAIRCUT" and "YOUR VOICE CAN FELL WALLS AND IF YOU DON'T STOP I SWEAR TO GOD I WILL TURN THIS CAR AROUND" projected across the walls of our children's bedrooms. -- Mary Elizabeth Williams