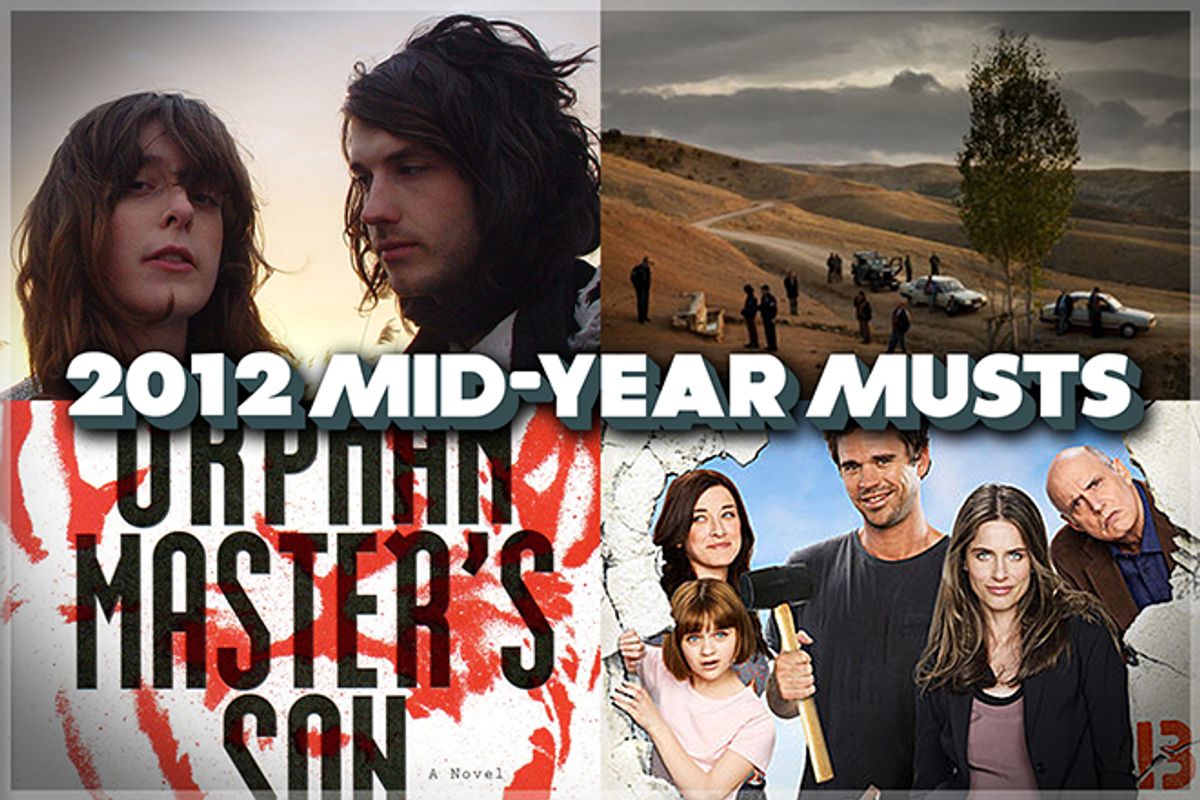 WATCH "Once Upon a Time in Anatolia." There's no point in trying to sell you Turkish director Nuri Bilge Ceylan's brooding, enigmatic 150-minute masterpiece as a gripping summer entertainment. Although it borrows its form from both the police procedural and the road movie, and its title from the 1960s epics of Sergio Leone, "Once Upon a Time in Anatolia" is a completely different kind of film that demands a fully awake, attentive and patient audience. Somewhere in the rural Turkish heartland, an urbane doctor goes on an all-night journey with the local prosecutor, a group of cops and a hapless murder suspect, who has already confessed to killing somebody in a stupid dispute and burying him out on the steppes. If I said that this movie took the characters and mood of Chekhov's "Uncle Vanya" and the plot of an episode of "CSI" or "Law & Order" (in extreme slow motion), but that its real subject, under the surface, was the spiritual identity crisis of modern Turkey, that might get us somewhere. But to explain why I think this might be the one truly great film released so far in 2012, I'd have to refer to the wordless beauty of Gökhan Tiryaki's wide-screen cinematography, and to the impossibly fine line Ceylan walks between realism and mysticism. (Now available on DVD and Blu-ray.) -- Andrew O'Hehir

LISTEN Beach House, “Bloom." Beach House aren’t especially loud, but they make a big, gorgeous noise: Alex Scally’s guitar scales skyscrapers and Victoria Legrand’s synths try to fill up the firmament, and they’re all tethered to earth by those stoic drum machines. Drawing from '80s post-punk and '90s indie without making the connections too obvious, their music is often mistaken for dinner-party soundtrack and their fourth album, “Bloom,” could easily be confused for their third. But this Baltimore duo work on a micro as well as macro level: These songs are full of small nuances and clever, beguiling twists — the seasick dissonance of “Lazuli,” the quiet corners of “Irene” — that demand careful, active scrutiny and transcend the status of mood music. Beach House simultaneously lull and jar; they won’t let you not listen closely.

READ "The Orphan Master's Son" by Adam Johnson. Like an epic version of George Orwell's "1984," this novel ranges from the bottom of North Korea's social ladder to its top, with plenty of affecting, wayward and even comic supporting characters. It's the horror and absurdity of life in a totalitarian state as it might have been depicted by Balzac. The main character, Jun Do, travels from life in a wretched orphanage to tunnel fighting and kidnapping for the Army, to manning a surveillance station on a fishing boat, before landing in a prison camp. He emerges as a new man -- specifically as a famous general, whose identity he assumes with the tacit consent of North Korea's enigmatic, terrifyingly puckish Dear Leader. But his new life, married to an actress he has long worshiped from afar, turns out to be even more dangerous than his old one. --Laura Miller

LISTEN Lambchop: “Mr. M." The Nashville indie orchestra Lambchop has had a strange career: Twenty-five years after forming as pickup band among friends and 12 years after releasing their biggest record (2000’s “Nixon”), the band has released their best album — an unclassifiable classic. The solemn, prickly, often lovely “Mr. M” muses on loss and love, distance and connection, as the strings swell sympathetically and the band channels smooth soul and florid countrypolitan. Frontman Kurt Wagner writes evocatively and honestly about everyday household matters — cleaning the coffeemaker, taking down the Christmas lights — yet he makes what should be the inconsequential clutter of a life sound crucial, enthralling, even exciting. When the album reaches its epiphany, he proclaims his love in a typically roundabout way, such that it’s impossible to determine if he intends “you” to be his wife, his friends or his fans. “Mr. M” is the sound of a man realizing he has a lot of people to love: a simple point, but one that resounds powerfully. -- Stephen Deusner

READ "The Fault in Our Stars" by John Green. Written for teenagers, this novel ask questions as difficult as those posed by any writer for adults: Why do we suffer, why must we die and what meaning can be found in any of it? Our narrator, Hazel Lancaster, is irreverent, bookish, soulful and very funny. She's also dying. She tells the story of her romance with Augustus Waters, a cancer survivor, and their shared quest to visit the reclusive author of a cult novel in Amsterdam. The novel, Hazel says, is "one of those books so special and rare and yours that advertising your affection feels like a betrayal," and the same could be said of this simultaneously sad and joyous book, except for the advertising part. You'll want to tell everyone you know about it. -- Laura Miller

WATCH NBC hustled the sitcom “Bent” on and off the air with such alacrity, you would be forgiven for assuming it was a total stinker. But the six-episode series starring Amanda Peet as a high-strung single mom and the tall drink of water David Walton as her rakish contractor was nothing of the sort, its stunted run a reflection of NBC’s never-ending dysfunction rather than the show’s quality. The series is a delectable romantic comedy served up in six bite-size installments that, if watched in quick succession, clock in at about the same run time as a movie. In such a short period, Peet and Walton’s excellent, zingy, will-they-won’t-they chemistry never has a chance to turn tiresome, just stay delightful. --Willa Paskin