Is America more exceptional today than in 1776?

Unlike today's leaders, the authors of the Declaration understood that "American exceptionalism" had to be earned 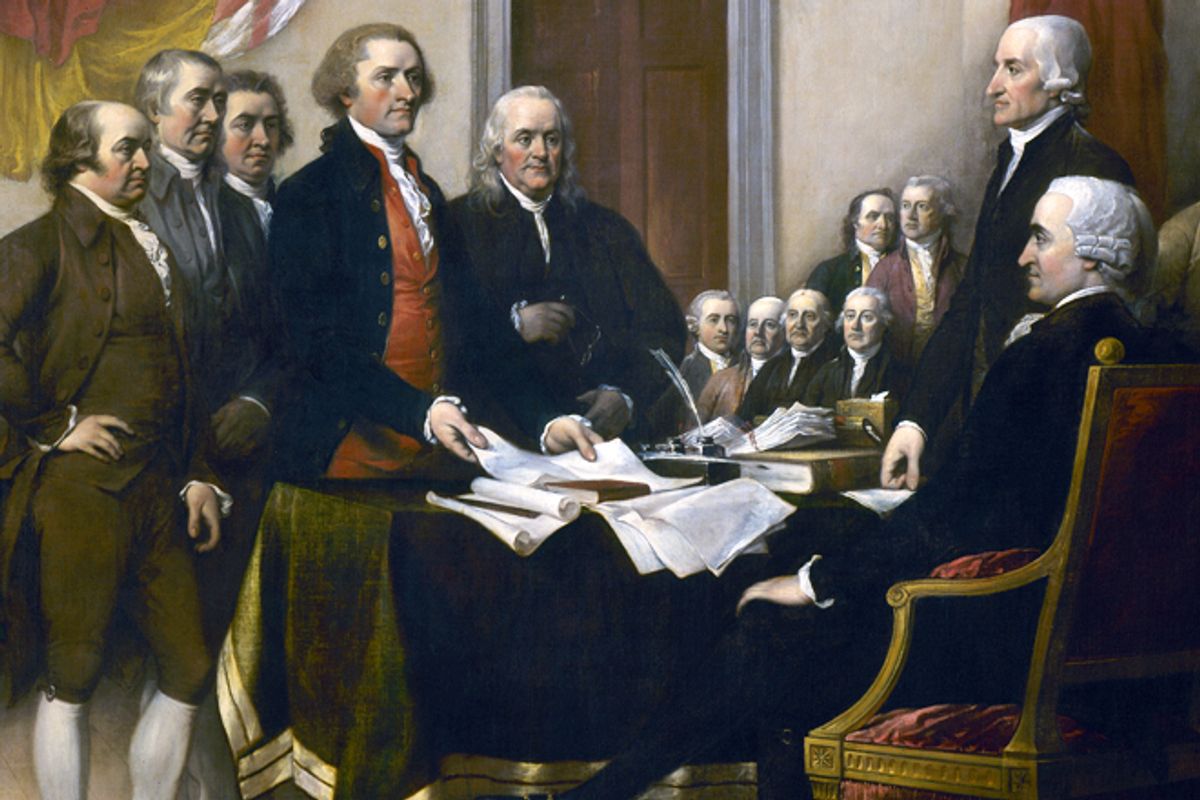 A detail from John Trumball's "Declaration of Independence"
--

We Americans misconstrue a lot in presuming that we know what 18th-century men thought about when they invented a nation that was joined to the transcendent value of human liberty. The founders’ vocabulary was different from ours. They invoked a word we don’t use much anymore – magnanimity – when they spoke of the generous concern meant to underlie the relationship between individuals, or between the government and its citizens. The new republic was to advance social harmony, which unequal governments (monarchy, aristocracy) did not.

It is noteworthy that in the Declaration of Independence, Jefferson emphasized this point in his criticism of the British: “We have appealed to their native justice and magnanimity, and we have conjured them by the ties of our common kindred to disavow these usurpations.” He justified separation from Britain as much on the basis of its moral abandonment of the colonies as of an unjustifiable use of power. When a people were treated thoughtlessly and callously, when their rulers failed to show genuine concern for their happiness, subjecting them to “injuries and usurpations,” they, as an abused people, had every right to protest loudly and even rebel, so as to obtain “new guards for their future security.”

It almost sounds as though, in affirming Americans’ rights to happiness and security, Jefferson was promoting universal healthcare for citizens. Fairness, the voice of justice, magnanimity – it sounds like the progressive script in 2012. The moral impetus is inherent in the language of the Declaration, but government has to balance the practical against the good. As in 1776, Americans today are still asking: What should government do in order to provide comfort to those it governs? What should it not do? When does magnanimity become too much government?

The problem facing the two parties in this election year is that these questions are not being asked and answered honestly. We can hardly begin to discern the right course to take until we liberate our minds long enough to agree on what words mean. Let’s start with the one we avow every Fourth of July. "Freedom." How is freedom measured?

Are we freer, or more liberty-loving, than the British today? Or the French or the Swedes or the Germans, all of whom magnanimously provide free healthcare to all within their borders? Those in this country who decry the Affordable Care Act, which they sneeringly call “Obamacare,” bring up plenty of bile in accusing an overreaching federal government of wanting to deprive individuals of their liberty. By the standards of 1776, their ideology is un-American. The oppressive and arbitrary power of private insurance companies, whose distinct lack of magnanimity toward ailing citizens is legend, pales in comparison to the damage a caring, if overly bureaucratized, Washington can do.

Knee-jerk reactions are dangerous. Buzzwords such as “big government” or “the Hollywood elite” are designed to make progressives appear as outsiders. The litmus test of “Do you believe in American exceptionalism or don’t you?” is perhaps the worst, because it wraps our well-enshrined national principle of magnanimity in hubris. A few years back, writing for the Financial Times Deutchland, Thomas Klau put it correctly: “In America, the collective image of foreign countries is a mythical one, preserved as if in formaldehyde, handed down from the time of the founding fathers.” The U.S., he said, “persists in describing itself as the freest country on earth, although by nearly every objective criterion, most European nations are more liberal and free than the United States.”

We are exceptional because we are the freest people on earth. That’s how the bombastic claim goes that nowadays causes America’s European allies to roll their eyes. As we wrote in Salon in April 2011, the trope of American exceptionalism is an artificial and superficial claim to infallibility. It grew over the decades as America grew in land and population. It was fed by aggressive westward expansion in the mid-19th-century (privileging white American freedom over Indians’ freedom); it hardened after the drama of World War II and the ensuing Cold War when we were anointed the leader of the Free World. The luster of exceptionalism should have dimmed when the Bush-Cheney crowd squandered the goodwill of the world after 9/11 by invading Iraq under false pretenses. But it hasn’t. Today, the question of exceptionalism is embedded in the useless, incendiary: “What is a real American?” The implied answer is: someone who uncritically embraces American exceptionalism.

For Thomas Jefferson, America did not become exceptional on July 4, 1776.  He and the other founders attached themselves merely to the promise of what America could become as a nation distinct from others. Exceptionalism was certainly not automatic, which is what today’s Republicans overlook when they attack President Obama (as Romney is wont to do) for not believing ardently enough in exceptionalism. It has become like a religious test – which, incidentally, Romney should be sensitive to, given that the Mormons of the late 19th century, prosecuted for the practice of polygamy, invoked the name of Thomas Jefferson in praying for inclusion in the American community.

The founders were not bewigged prophets. They did not grant posterity something called American exceptionalism on July 4, 1776. They were fighting a war, and they needed to define their purposes convincingly – in part to attract political recognition from the greater nations of Europe. Forget, for a moment, George Washington’s immovable gaze, Thomas Jefferson’s statuesque pose. Substitute for these images the complex machinations of self-interested men attaching themselves to competitive, land-hungry, occasionally hostile states. In the dark days of the Revolutionary War, after Gen. Cornwallis sent the traitor Benedict Arnold ashore in Virginia and the poorly defended countryside fell to his forces, prominent Virginians felt certain that the Pennsylvanians would not come to their aid. No one was feeling secure, exceptional or especially free.

The founders were not saints. They were politicians who had their good and bad days, who lived, as we do, with seemingly irremovable conflict, who misjudged and often overreacted. They well knew that the persistence of slavery threatened their moral standing in the world. Jefferson inserted a long paragraph in the Declaration, removed by Congress to assuage other Southerners, in which he unconvincingly blamed King George for preventing colonial assemblies from finding a way out of slavery. Before July 4, 1776, Lord Dunmore, the royal governor of Virginia, launched a preemptive strike against the rebels, waging war against the planter class by declaring to poor whites and enslaved blacks that their interests lay with the British side and not their American oppressors, and freedom could be had by abandoning the Revolutionaries.

A week after the Declaration unanimously passed the Continental Congress, Virginia planter Robert Carter, who possessed 70,000 acres and owned more than 500 slaves, gathered his human property and read the document aloud to them. He offered them a choice. They could join Dunmore, and enlist in “the King’s service,” or they could remain in bondage. Without apparent guile, he asked whether they disliked their “present condition of life.” They proffered their allegiance to Carter, vowing “to use our whole might & force to execute your commands” – or so his diary reads.

Thus, the birth of the United States of America was messier than our textbooks over the years have painted it. As we noted in Salon last weekend, the political world inhabited by the Revolutionary generation cannot really be compared to ours – no one wanted to unleash the force of democracy or give the vote to ill-informed citizens. As early as Washington’s first term as president, one side (Hamiltonians) aimed to protect the interests of the wealthy, while the other side (led by Madison and Jefferson) feared that the wealthy would return the nation to government by an entrenched aristocracy. Political partisanship was as bitter at the beginning as it is now.

On this Fourth of July, we can be realistic about what America was and what America is, without sounding unpatriotic. Magnanimity is a good word, and America is still a good place if you want to try to better yourself while extending compassion and generosity to others.