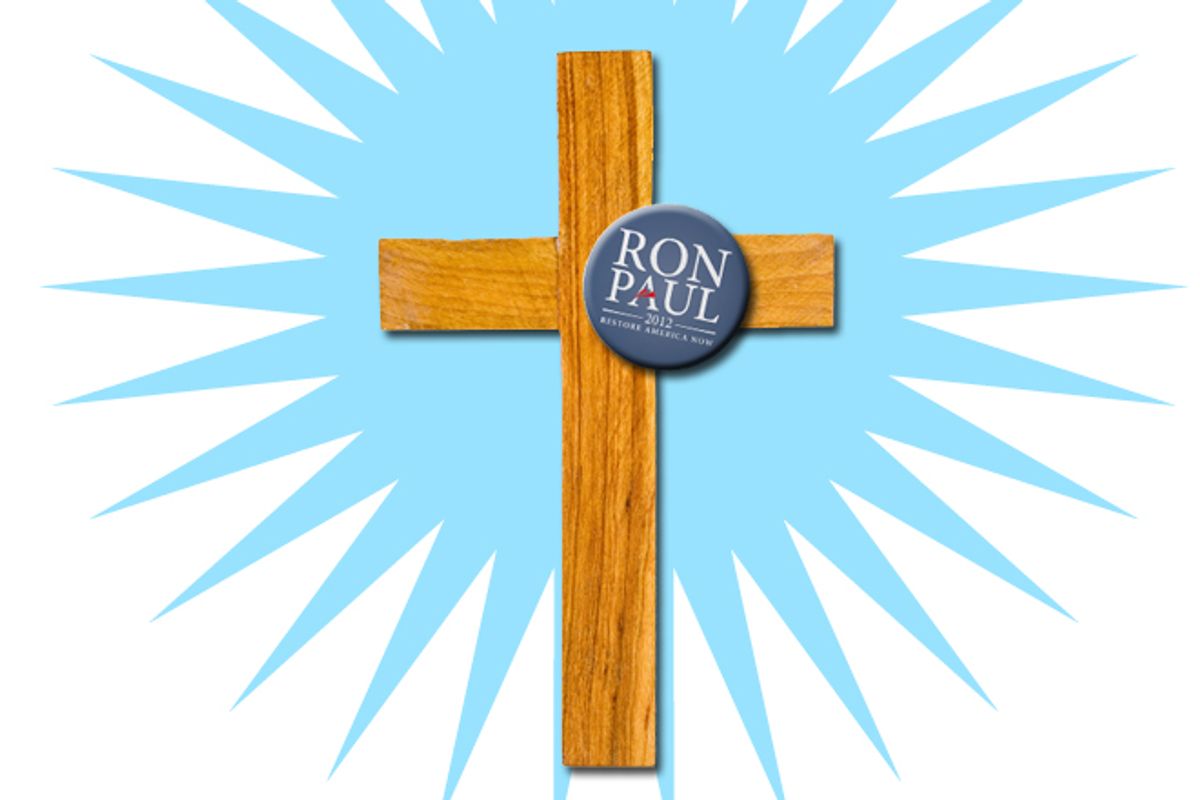 At the Iowa Republican State Convention earlier this month, Ron Paul supporters walked away with 23 of the 28 delegates headed to the Republican National Convention in August. This effort, which Paul enthusiasts also have pulled off in Minnesota, Maine and Nevada, is less about altering the outcome of this year’s nominating process than it is reshaping the GOP from the ground up. Just as the religious right launched its future dominance of the national party by starting at the local level in the 1980s, Paul’s supporters are looking to gain control of the party apparatus in the states. They are undertaking this strategy with the help of what might be called the "other religious right," made up of religious conservatives who reject the decades-long alliance between the Christian right and the GOP.

Paul, normally seen as an irreligious libertarian, does have a religious ideology, most frequently captured in his invocation of “biblical economics” to describe the underpinnings of his demands for no-debt federal spending and a return to the gold standard for monetary policy. But Paul — much to his supporters’ delight — has always eschewed the overt religiosity that other Republicans have seen as indispensable to their political success, rejecting campaign trail salvation stories in favor of an ideology that his religious followers insist is more authentic, more protective of their freedom — and more in line with their Bibles.

Paul and his followers are fond of describing themselves as a “remnant” — a biblical term referring to a small group of true believers who preach the gospel during the tribulation. In a speech to the South Texas Region of the John Birch Society the summer of 2009, Paul recounted his early study of Austrian economics, adding that “there was that remnant out there that did talk about it because no matter how bad things get, there’s always somebody available to try to hold things together, to hold the true beliefs, our true values, no matter what the government is doing.”

Describing his conversion from Bush family insider to Paul devotee, Doug Wead, who masterminded both Bushes’ evangelical outreach and in 2011 became a senior advisor to Paul’s campaign, told me last summer that evangelicals had been led astray by the culture war focus on establishing a “Christian nation.”

As much as that sounds anti-theocratic and anti-authoritarian, though, religious Paul supporters are not, as several emphasized to me, libertarian. They like authority — biblical authority.

These religious Paul supporters are part of a subculture that fuses some of the most extreme elements of the American right: birthers, Birchers, neo-Confederates, contraception-eschewing home-schoolers, neo-Calvinists and gun rights supporters who think (like Paul does) that the National Rifle Association is too liberal. They include disaffected former supporters of Republicans like the Baptist preacher-turned-politician Mike Huckabee and Mormons who won’t vote for Mitt Romney.

They’re attracted to Paul because they think that in the place of the federal government, which they believe should not be “legislating morality,” their ultra-conservative brand of Christianity should play a central role in shaping the laws and morals of their states and communities.

“There are a lot of people professing Christ,” said Dave Keagle of Warren County, Iowa, whose wife, Krista, home-schools their nine children, “but we are actually looking for people who live what they profess.” (The Keagles told me just before the Iowa caucuses they couldn’t vote for Michele Bachmann because “God has specific roles” for men and women and that “men should be leaders and women should be submissive.”)

Keagle, like other religious Paul supporters, believes the government is “out of control”; since “God has already established laws,” he contends, the government shouldn’t be attempting to supplant that. He scoffed at religious right mainstays the American Family Association and Focus on the Family: “They’re not my type of Christian.”

Chuck Baldwin, who worked for the old Moral Majority and Christian Coalition back in the heyday of the 1980s, says the religious right is now “a hollow creature” that has “lost its moorings.” Baldwin ran for president in 2008 on the far-right Constitution Party ticket because Paul didn’t get the GOP nomination, and Paul endorsed him. Baldwin briefly ran for the Montana GOP nomination for lieutenant governor but withdrew in February, citing insufficient funding. The Southern Poverty Law Center identifies him as one of 30 “new activists leading up the radical right,” part of an anti-government “patriot” movement.

Baldwin, who has hinted that secession might be desirable or even inevitable, launched a Black Regiment of pastors in 2007. Among the requirements for the 300 pastors who signed up: one must be male, attest to being “the head of his own home, having his wife and children in subjection to his authority. No henpecked men here.” They had to prove they had publicly protested against abortion. He sees his pastors rising up against that “tyranny” as pastors did against the monarchy in revolutionary times.

Tony Romo, of Greenville, S.C., is one of Baldwin’s Black Regiment pastors, a big supporter of his 2008 presidential campaign, and now a supporter of Ron Paul. “We’re not loading up rifles or anything, but we’re preaching — blog, even Facebook, are all avenues by which we can influence others. Because it’s going to take a whole lot of us to be able to turn this thing around,” he told me. Romo took aim at other Christian pastors who “stand behind pulpits that are promoting things and people that are violating the Constitution and yet they will not listen or adhere to a small remnant, if you will, like me and Chuck Baldwin and folks like that.” (Romo was also involved with the Christian Exodus movement, which has “the ultimate goal of forming an independent Christian nation that will survive after the decline and fall of the financially and morally bankrupt American empire.” Its slogan was, “Forsake the empire! Seek the kingdom!” Its website features, among other things, articles advocating for wifely submission to their husbands, against birth control, against paper currency and for a gold and silver standard, and for secession and “states’ rights.”)

Patricia Wheat, an activist I met at an antiabortion rally in South Carolina, contended that the Constitution “comes out of the Book of Deuteronomy, which sets specific precepts for government.” (Wheat also serves on the South Carolina Sound Money Committee, which promotes an “alternative currency” for the state.) The Bible, she added, “is the only recognized religious book that sets forth jurisdiction and promotes liberty. The Bible says that the family is responsible for education of the children. The Bible says that the church is responsible for the spiritual nurturing in the community and to minister to the widows and the orphans. That’s a legitimate function of the church. Civil government is to defend the people’s liberties so they can live freely, because a free people are by nature of being a free people, a holy people.”

At least one religious figure who publicly endorsed Paul, Omaha pastor Phillip Kayser, has called for the death penalty for gays, forcing the Paul campaign, after touting Kayser’s endorsement just before the Iowa caucuses, to claim to be unaware of his position.

At the core of Romo’s beliefs — like the other religious Paul supporters I spoke to — is that the federal government is largely unconstitutional. Romo’s church isn’t incorporated under South Carolina law, nor did he apply for tax-exempt status from the Internal Revenue Service. Those acts, he said, would make “the state your Lord” or the “federal government your Lord.” If the government “dictates to the church you can no longer preach against homosexuality, those churches better submit ... you [give] them [the government] the right to tell you what to preach.”

Slavery, it seemed, was on Romo’s mind. He told me he considers some forms of it acceptable — a view he offered up voluntarily, without any prompting by me. For example, he insisted that imprisoning robbers only consumes state resources, and a better solution would be to require the robber to work for the person he stole from to pay him back — because certain forms of slavery are permitted in the Old Testament.

If the religious right and the Republicans understood the “proper” role of the federal government (as laid out in the Bible), these Paul supporters maintain, they’d understand that, for example, the Constitution didn’t authorize the Supreme Court to even decide Roe v. Wade. If you understood that decision as an overreach of the federal government, you’d see it as non-binding. Paul’s admirers like that he has tried to codify this argument: his Sanctity of Life Act, which he has introduced in Congress but for which he has failed to attract co-sponsors, would, in addition to declaring that life begins at conception, strip federal courts of jurisdiction to hear cases challenging the constitutionality of laws criminalizing or restricting abortion.

“If Republicans don’t listen to a lot of the things he talks about,” Tea Party favorite Sen. Jim DeMint, R-S.C., said of Paul in January. “I don’t see how we can become a majority party.”

Gaining control of the state party apparatus “has been our plan since 2007,” said Crystal McIntyre, a home-schooling, pro-Paul activist in Iowa, a strategy she said activists have executed independently of the Paul campaign. Now, she said, despite the protests of longtime party activists, “we are in the majority.”