We asked climate skeptics for their opinions on recent extreme weather events. You can probably guess their answers 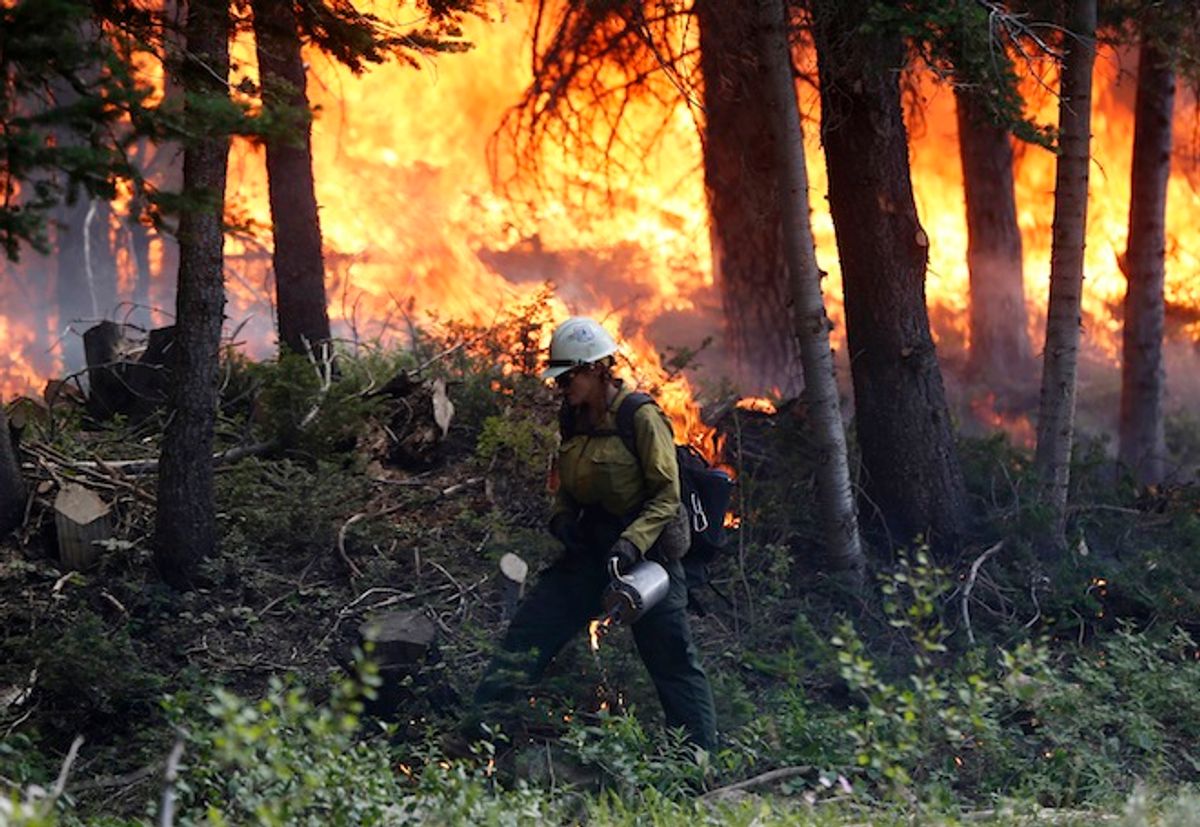 A firefighter works a burnout operation on the north flank of the Fontenelle Fire outside Big Piney, Wyoming, July 4, 2012. (Reuters/Jim Urquhart)
--

With huge swaths of the mountain West in flames, chunks of the eastern seaboard suffering power outages after a massive storm, and nearly three-quarters of the lower 48 experiencing dry or drought conditions, extreme weather has been on everyone’s mind — with climate change not far behind.

Concerned scientists certainly saw an opportunity to get a message across: In a telephone briefing last week, Princeton geosciences professor Michael Oppenheimer said, "What we're seeing is a window into what global warming really looks like. It looks like heat, it looks like fires, it looks like this kind of environmental disaster … This provides vivid images of what we can expect to see more of in the future."

Maybe this would be the moment that the visceral reality of disaster broke through the political fog. League of Conservation Voters president Gene Karpinski thought it might, saying he hoped that “record-breaking temperatures, intense droughts and wildfires and other climate-related disasters” would act as “a wakeup call” for the dangers posed by climate change.

So I called a couple of well-known climate “skeptics” to see what they had to say about the crazy weather. Sure, one fire or storm, however bad, is hardly conclusive evidence, but might the visions of a hellish future prompt a sense of urgency strong enough to jar even the slightest change of heart? You can probably already guess the answer.

When I chatted with William O’Keefe, formerly the COO of the American Petroleum Institute and current fellow at the George C. Marshall Institute, a Koch-funded conservative think tank, he was exceedingly polite as he dismissed climate scientists’ warnings, saying, “The advocates for catastrophic human-induced climate change will use any event to advance their proposition.” He explained, “I am troubled by people who latch onto any event to say this proves or disproves climate change … the climate system is incredibly complex and it may take decades for us to understand it enough to create a model that allows us to understand what will happen in the future.”

He’s right that we shouldn’t attribute any one event to climate change, and that there's a lot we still don't know about climate systems; few scientists would argue otherwise. But there’s a whole lot we do know, and waiting decades until we do anything at all is the kind of logic only a former Exxon lobbyist could come up with. The thing is, there aren’t many people these days who deny that climate change is happening at all; even among Republicans, a plurality of voters believe climate change is occurring. Instead, self-styled "skeptics" offer a patchwork of arguments designed to obfuscate the issue, cautioning that we don’t really understand what’s going on, that we don’t know how much humans are really contributing, that scientists are just out for grant money, and besides, won’t somebody please think of the poor? They seek out the fringe scientists who support their opinions, and use scientific-sounding arguments to counter the scientific consensus; they’re just reasonable enough to sound legitimate to anyone who’s not well acquainted with the evidence.

So even the notoriously crackpot Heartland Institute, which recently equated global warming activists to the Unabomber, uses scientific language in support of its totally insane ideas. James Taylor, Heartland’s senior fellow for environmental policy, told me, “It's important to keep in mind the factual data in addition to what's in the media, because they have an interest in selling newspapers and getting viewers, and even scientists have an interest in getting grants to keep this supposed global warming crisis going." Said Taylor, "This is what happens with the global warming issue, because there's always someplace in the world where there's high temperatures, where there's drought, where there's a storm. They'll take these anomalous issues and use them to spread the myth that global warming is involved."

When people like Taylor depict those who are concerned about climate change as “alarmists” and doomsayers, those who object to doing anything set themselves up to play the part of the "reasonable middle": They can acknowledge that something funny is going on while insisting that we don’t know enough to do anything about it. And so denial becomes less a battle over facts than a waiting game, with appeals to scientific knowledge used as a delay tactic rather than a wakeup call; it’s concern trolling, climate-style. All those invested in the status quo need to do is create enough uncertainty to delay action indefinitely.

Public officials have picked up on the tactics of professional deniers. Cory Gardner, a Republican representative from Colorado, co-sponsored a bill last year that would have revoked the EPA’s authority to regulate carbon emissions under the Clean Air Act, and has said that “I think the climate is changing, but I don't believe humans are causing that change to the extent that's been in the news.” After the High Park Fire torched 87,000 acres and 257 homes in his district, he didn’t pull the Mother Nature card in claiming that human action played no role whatsoever in the fire — rather, he pointed to a federal roadless area policy as a culprit in the pine beetle infestation that left thousands of dead trees standing like kindling, with nary a mention of the fact that the warm winter allowed the pests to survive. While neither he nor Colorado Springs Rep. Doug Lamborn responded to requests for comment, they didn’t have to — they’re winning by default.

What should be clear by now is that there's not going to be one event that we can unequivocally attribute to climate change; the factors involved in weather and disaster events are too complex, and there will always be someone explaining — not entirely incorrectly — that something other than climate is the real culprit, or that freak events happen naturally. That certainly doesn’t mean we shouldn’t talk about climate change as a factor in extreme weather far more than we do now: A paltry 3 percent of mainstream news organizations even mentioned it during coverage of the wildfires. But it does means that there isn’t going to be one moment of truth when everyone realizes that climate change is in fact taking place, let alone a moment when climate deniers suddenly see the light and change their tune.

More generally, it's foolish to expect disasters to bring about the changes we want to see. The catastrophic BP oil spill, for example, didn’t do much to change Louisiana’s relationship to the oil industry — in fact, the state’s senators were among the loudest voices for reopening the coast to drilling as soon as possible, with hardly even a nod to enhanced safety measures. Relatively limited technical changes are far more likely to come out of disaster events than deeper structural ones, and officials are motivated to reestablish “normality” as soon as possible. When it comes to climate change, though, going back to normal means continuing with business-as-usual, which means catastrophic effects are almost guaranteed down the road. And while extreme weather events and disasters have the potential to serve as focusing events or “teachable moments,” they also put a strain on already-tight local, state and federal budgets, diminishing our ability to actually invest in mitigation and preparation, let alone deal with other problems.

So, will climate disasters be our wakeup call? Maybe eventually, but I wouldn’t count on it. Expecting any one event — or even several events — to suddenly change the politics of climate change so that we’re all on the same page is not a strategy for success. And hoping that climate deniers who are deeply invested in their positions will be shocked into changing them isn’t a very good bet. We can't wait for a disaster to save us; we're going to have to do the work ourselves. So the next time someone says the U.S. will do something about climate change when things get bad enough, or that people will wake up to climate change when a disaster strikes, or that we’ll believe in climate change when we see it, remind them it’s already here.