A "sexist" onesie spurs outrage, but the bikini's not the problem. It's all of you "cool," "funny" parents 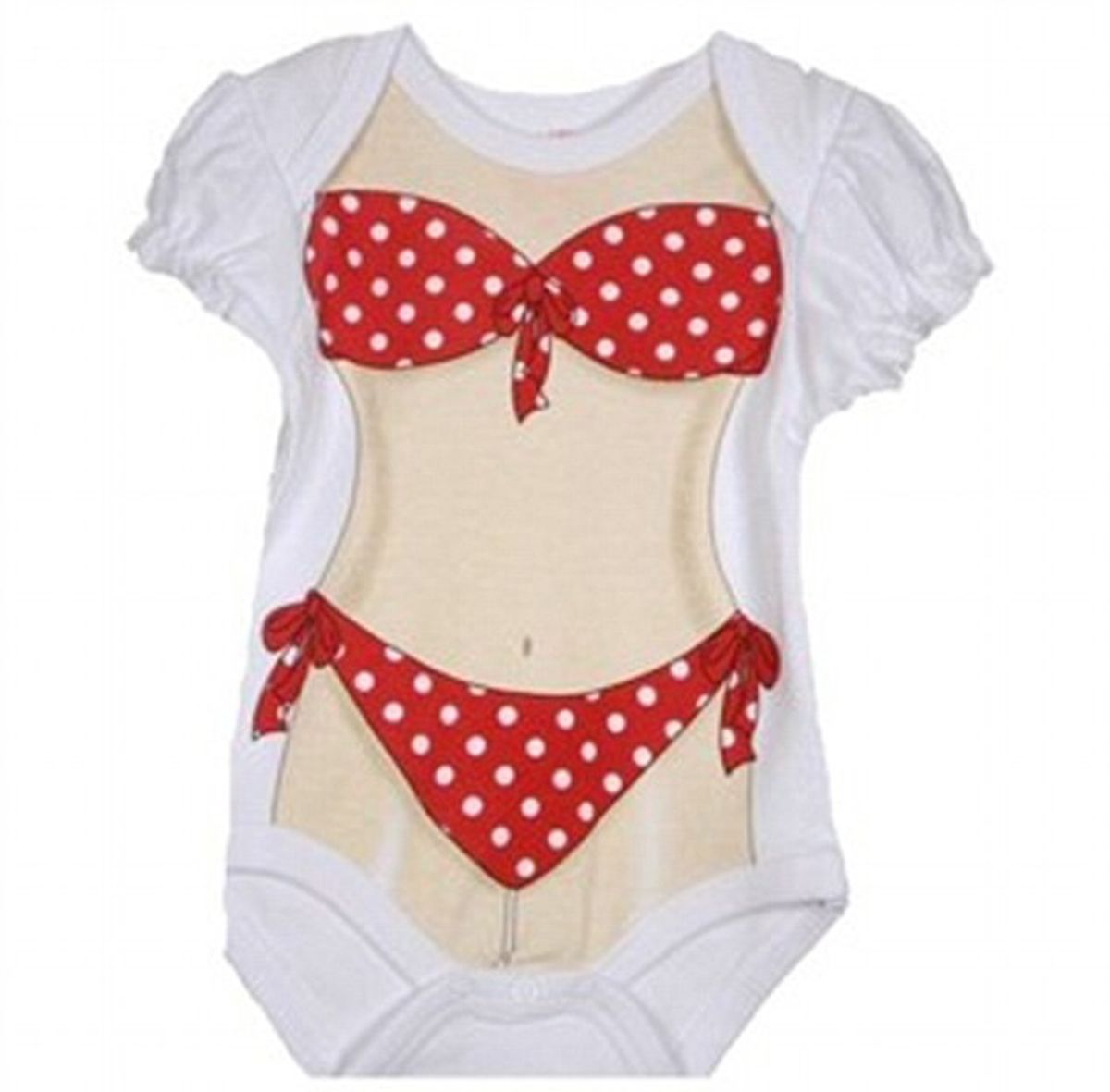 Babies are great because you can dress them up funny and they can't do a damn thing about it. It's a little parental payback for the way they mercilessly wring out your life force. But parents, I beseech you, just because you can turn your infant into a sartorial punch line, don't.

Consider, for example, the case of the sexy onesie. This week, the Mississippi department store Gordman's found itself the center of national attention when a concerned mom notified a local news team about a baby outfit embellished to look like a curvaceous, bikini-clad female trunk. As parent Laura Faulkner disgustedly told WMC-TV, "It puts out a bad meaning about society for them to want to put something like that on an 18-month-old baby." And a local father chimed in that, "I think it gives people the wrong idea."

The idea that maybe your not yet 2-year-old isn't just a baby but a babe? Trompe l'oeil baby clothes are a popular genre -- but others have played with illusion in a way that don't seem quite so blatantly suggestive. It's one thing to make a onesie look like a bikini; it's another to make it look like a woman's body. Baby in a real bathing suit? Logical. Baby with Kate Upton's dimensions? Creepy. But other Mississippi shoppers didn't see the big deal about it, calling it "cute." MSNBC commenters were divided, some calling it "in poor taste," others seeing "harmless fun."

The battlefield of parenting is full of hills, and we all have to choose the ones we'd die on. That's why it's easy to shrug off a goofy outfit as a lighthearted fashion statement, like those mustache pacifiers. Your daughter isn't automatically destined to be oppressed by the patriarchy because she's wearing a getup that'd be appropriate for the Sports Illustrated Jr. swimsuit issue. But the way we present our children to the world says an awful lot about how we see ourselves, and how we want others to see our sons and daughters. It matters. It matters because long before they're fully aware of the roles in which we cast our children, the grown-ups and other kids in their lives will be responding to them based on the way they look and dress. So if your kid is wearing a Hooters onesie that announces he's "Boob Man," or a Gymboree shirt that declares she's "Pretty Like Mommy," that child will pick up the message long before he or she can read.

It's not just about the ostensibly witty disconnect of putting a chubby little toddler in the cartoon body of a shapely woman or in an outfit that insists you "Save a Horse, Ride a Cowboy," which is still, by the way, gross. It's about the whole stampede to make our babies a projection of our own incredible outrageousness. It's true that a lot of baby gear is lame. And it's OK to reject the traditional pastel and fuzzy wuzzy. But believe me, breeders, nothing screams, "Just because we've reproduced, WE'VE STILL GOT IT, EVERYBODY" like a baby in a Tupac hoodie. Nothing says "still grabbing for relevance" like a kid wearing skulls. That contentious bikini onesie is just one typical offering from Bon Bebe, which offers a full "WildChild" line of apparel with sentiments like "Sorry Girls, No Dating Allowed," "Tuff Baby," "Ladies Love Me," "My Mom Is the Bomb" and "You Wish You Were As Cute As Me!" A baby wearing any of the above messages might as well get a shirt that says "My Parents Are Pretty Aggressive About How Cool and Attractive Their Spawn Is and They're Kind of Douchey About It."

If you're wondering if a bikini onesie is a fine example of how deeply institutionalized our cultural sexism is, how we objectify girls quite literally from the time they're in the cradle, well, sure. But more than that, it's just sad and desperate. As one parent summed it up to WMC, this stuff is just "a little ridiculous." Your baby is not a chick magnet or a future Victoria's Secret model or a fan of the Wu Tang Clan. Maybe you are. So if you're dying to make a hilarious, mass-produced statement, isn't that what your car bumper is for?