Pick of the week: The beauty queen and the time-share tycoon

Pick of the week: A hilarious and tragic recession yarn, "The Queen of Versailles" is too amazing for fiction 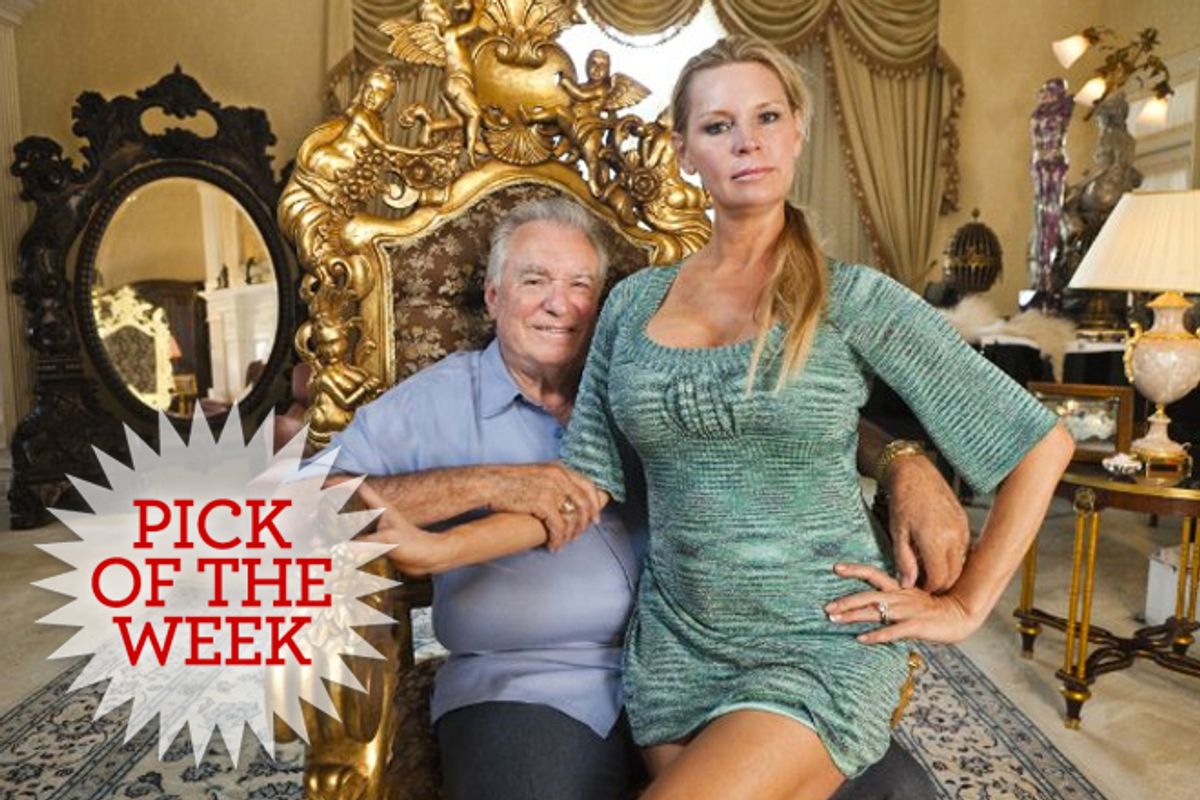 David and Jackie Siegel in "The Queen of Versailles"
--

Maybe halfway through photographer-turned-filmmaker Lauren Greenfield’s documentary “The Queen of Versailles” -- a movie you can't quite believe is all true because it says too damn much about our wonderful country -- Jackie Siegel takes her kids on a family vacation. It's an ordinary sort of journey, one undertaken by almost all parents, roughly equal parts chore and recreation. Jackie's married and lives in Florida now, and she's dragging the children (or some of them anyway; I think she's got eight) back to visit Grandma in the modest upstate New York town where she grew up.

But Jackie's not your typical Sun Belt mom with too many kids. She's a one-time beauty queen and cocktail waitress whose husband is David Siegel, a time-share tycoon whose boom-and-bust career exemplifies the greed and stupidity of the American real-estate bubble in one individual. When David and Jackie nearly went broke, they were in the middle of trying to build the biggest private home in the country, a grandiose monstrosity on a scale that makes your garden-variety gated-community McMansion look like a Lithuanian peasant's cottage. Flying back to Elmira, N.Y., with the kids marks the first time Jackie's been on a commercial jet for quite a few years, and she acts baffled when she gets to the Hertz counter. "Who's my driver?" she asks. Mind you, Jackie grew up in modest middle-class circumstances, and hasn't been super-rich for all that long. But she has totally forgotten that regular people don't have chauffeurs.

Still, it's Jackie -- surgical enhancements, studio tan and all -- who is the heroine of "The Queen of Versailles," which is like a Theodore Dreiser novel for our time, infused with the vivid, vulgar spirit of reality TV. If she's a ludicrous person, so are a great many of her countrymen and countrywomen, and her story also has elements of profound tragedy and allegory. There are plenty of laughs in "Queen of Versailles," but I never had the feeling that Greenfield was mocking Jackie, who comes across as a likable, commonsensical middle-aged mom, an ordinary person who has led a life that goes beyond the unlikely or the bizarre to the flat-out impossible. In her pre-David Siegel life, she put up with getting her butt pinched while serving booze and cleaning out bedpans in a nursing home. Now she finds herself pumping out kids and managing a 26,000-square-foot house for a sour and distracted rich guy who's 30 years older.

I'm not talking about the never-completed house modeled on Marie Antoinette's palace at Versailles, mind you; that one was supposed to be 90,000 square feet, but now sits by itself on a weed-choked peninsula, inhabited only by bats and rats. By the end of the film, with most of the household staff laid off in the Siegels' existing home, Jackie’s job includes wandering around scraping dog crap off the carpeting in room after room, and discovering how many of her children’s pets have died from neglect. Unlike her husband, she seems capable of seeing the bright side of this grim turn of events, and -- even more unlike her self-pitying, endlessly aggrieved husband -- she understands that the real victims of the crash are not her family, but the millions of people left with no jobs or no homes.

David Siegel, who made his enormous fortune by selling vacation time-shares in developments in Florida and Las Vegas and other resort destinations to working- and middle-class people who couldn’t quite afford them, tried to sue Greenfield over his portrayal, just before the film's Sundance premiere last winter. Specifically, he objected to promotional copy describing “Queen of Versailles” as a “riches-to-rags” story, and maybe he’d have had a better case if that weren’t exactly how he puts it in the movie. What David really doesn’t like, I suspect, is seeing himself on-screen as a brooding old cuss with no life outside his work and no time for his own children, who seem prodigiously rootless and unhappy in a way only rich kids can be. He shuts himself up in a cluttered den with a widescreen TV and stacks of papers, trying to find a way to rescue both his Orlando dream house and his Vegas condo tower, now deeply underwater. (Time-share lending was essentially a species of subprime mortgage, and when credit dried up so did Siegel’s business.)

I'm not suggesting that anyone watching should feel any compassion whatever for this dude, who was essentially a vulture feeding on the dreams of vulnerable people. Still, Greenfield does allow us to see Siegel’s more pathetic human qualities, especially the fact that what he’s personally chasing with his unbuildable dream house is the same ersatz vision of luxury, the same unattainable simulacrum of the good life, that he’s been selling to poor folks one Vegas weekend at a time. He’s not likely to ever see his Versailles completed, but even if he does it’ll be infested with cockroaches and furnished with ghastly paintings of his family in pseudo-monarchist finery. Siegel and his wife have absolutely no idea that their attempt to build a replica of Versailles on a tract of swampland near Disney World, and fill it with “Louis XIV-type antique furniture,” is a cruel and altogether too appropriate historical joke. But that’s really not their fault; they did not choose to live in a country that sustains itself on recycled delusions, while its reality has become a vicious self-parody.