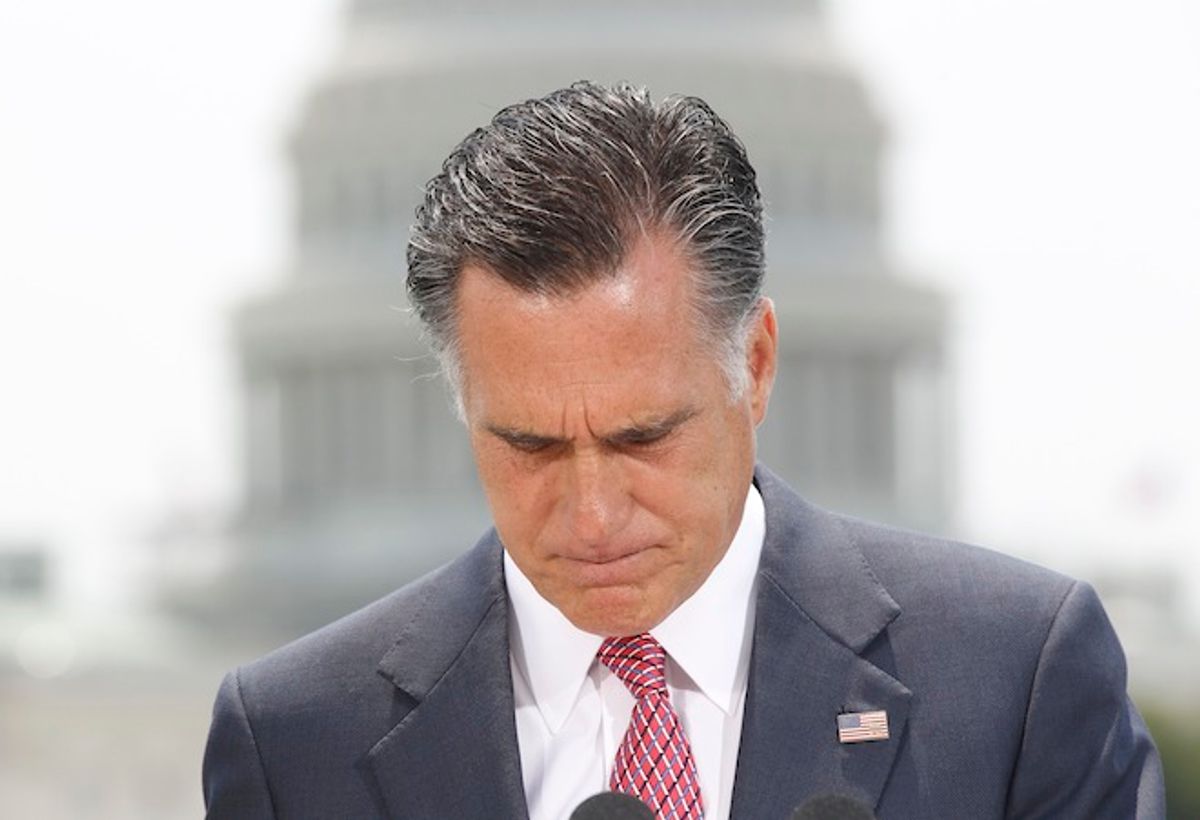 Why did elite Republicans revolt against Mitt Romney’s campaign this week? Perhaps because it’s win-win for them.

As Alex Pareene details, various conservative media outlets – Bill Kristol, the Wall Street Journal editorial page – chose July 4 week to open up a broad attack on Romney’s campaign strategy. Never mind the particulars; as Pareene says, it’s actually not much of a critique. Not to mention that, with Friday’s jobs number coming in low, conservatives may suddenly find that Romney’s campaign has been right all along. There’s still the question of why it made sense to open fire, and why now was a logical time. After all, there were no major shifts in the polls, and while Romney’s reaction to the Supreme Court decision on healthcare may not have been sufficiently agile, it still doesn’t really explain the onslaught.

So why the sudden hits?

While it’s always risky to attribute motives to political actors, it’s safe to look at the incentives they may be responding to. And the incentives make an attack this week very enticing.

Suppose, for example, that Romney is fated to lose. In that case, it’s always nice for elite Republicans to have laid down a “told you so” marker earlier in the process – not only does it make them look smart, but it also can help control the spin on that loss. That is, a Bill Kristol can already begin to make the case that Romney lost because he didn’t listen to Bill Kristol often enough. Or, less personally, because he didn’t sufficiently embrace the issues and causes that Bill Kristol wants the Republican Party to embrace.

What if Romney wins, though? Won’t the critics look bad and lose clout within the party?

Nope. For one thing, few if any will remember what any of them wrote months before the election (that is, no one will remind anybody; in the Romney loses case, the critics in question can quote themselves all they want). It’s not hard to devise criticism that anticipates what the campaign is apt to do anyway; in that case, the critics can actually take credit for a Romney win, which clearly only came because the campaign adopted their July insights! See, I told you this was win-win.

One might also note that the timing of this set of gripes was almost perfectly designed to make them noticed by political professionals (and political junkies) but almost no actual voters: Not only was it a holiday week when regular people weren’t paying attention to politics, but it was a week ending with a scheduled major news story – the monthly jobs report – guaranteed to change the topic away from any sustained negative attention to the Romney campaign generated by the criticisms.

There’s a bit more to it, however. This set of criticisms is a familiar one from previous campaigns: The candidate and his staff are too isolated and insufficiently experienced in the realities of modern national campaigns; they should expand to include more of those who have been through those campaigns.

That’s not just self-serving self-promotion from veteran campaign professionals who want a job, perhaps because they chose the wrong horse during the nomination fight – or from friends of theirs with access to prime Republican opinion space. It’s also a way of maintaining party discipline. Candidates who fill their campaign with staffers loyal only to them become presidents who fill their White Houses with staff loyal to them. And that means they may not be loyal to the party.

Fill the campaign with loyal, experienced Republicans, and you’ll wind up with a White House full of loyal Republicans with deep ties to the Republican Party network. That won’t always ensure that the president will always be loyal to the party, but it certainly helps.

All in all, there’s very little downside for most national Republicans to making a quick, strategic hit on the campaign right now. Again, that’s not to say that Bill Kristol, the editors of the Wall Street Journal, and any national Republicans they are in touch with are simply being strategic here. There’s no way to know that; it’s certainly possible that the timing of this had to do with disgruntlement about the Supreme Court healthcare decision, or frustration with the stagnating polls, or simply a lack of other news to write about during a slow news week. Still, it certainly fits with the incentives out there: A small-scale hit this week achieves several things for conservative pundits and for the Republican Party, and just doesn’t have a downside.