Who are you, Katie Holmes?

We thought we knew the teenager on "Dawson's Creek." Then she married Tom Cruise. Now she must reintroduce herself 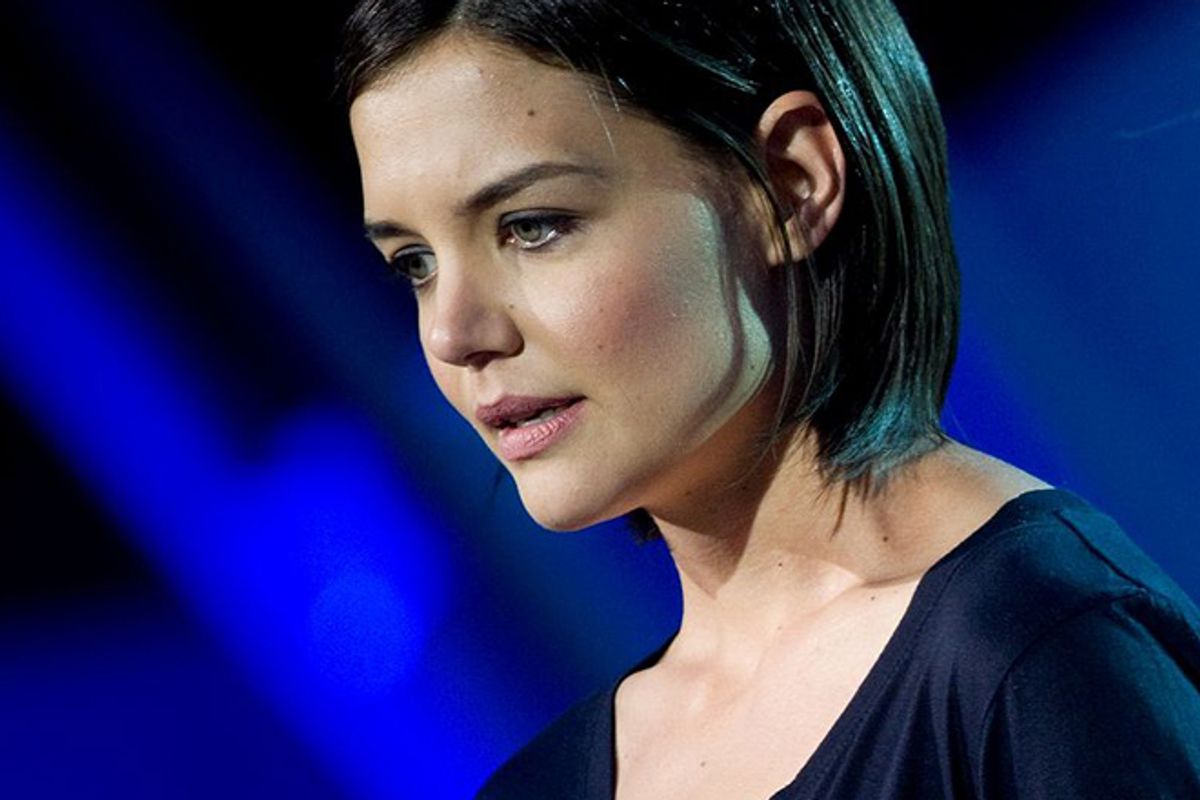 At the end of the first season of “Dawson’s Creek,” the WB series about precocious teenagers, Joey Potter, the girl-next-door played by Katie Holmes, goes to visit her father in prison. Parentally speaking, Joey’s had it tough. Her father cheated on her mother and got thrown in jail for marijuana smuggling while her mother was dying of cancer. Joey hasn’t exactly forgiven him, but she goes to visit him at the clink anyway, and through a prison fence (she missed visiting hours), Joey tearfully tells her pop that what upsets her most about all the unforgiveable things he’s done to her and their family is that he doesn’t even know her: “You messed up because you don’t know me. I’m your daughter, and you don’t know me at all. ”

At the time this scene aired 14 years ago (a chronological fact that makes me, a person who is not really all that old, feel like an Australopithecus), the double edge of this line was that we, the audience, knew all about Joey. A decade or more later, the double edge of that line is the opposite. It seems like a comment on how we don’t know Katie Holmes at all.

In the wake of Holmes's decade-long trek into mystery, her filing for divorce and her getting increasingly frisky with the media, watching “Dawson’s Creek” these days is full of moments like this, right from the show’s very first line: Holmes saying “I’ll be right herrrre” from "E.T." That turned out to be not at all true, but it at least introduced the notion of her behaving like an alien. “Dawson’s Creek” has not aged well — all its SAT words and metaconversations are neither old-fashioned nor newfangled enough to be charming; instead, they're just embarrassing. The show is like that thing you did two years ago that you know you will be able to laugh at when it becomes that thing you did 10 years ago — but it still hasn’t aged anywhere nearly as strangely as Joey Potter.

When the show ended, Joey Potter, with a name that could be out of a children’s limerick, was a member in good standing of that cohort of angsty adolescent heroines — think Angela Chase, Lindsay Weir, Buffy Summers, Felicity Porter — whom one knows so well he or she could probably write their diary entries. (The extent to which every one of these characters except for Buffy would have been a compulsive Internet confessor makes me wonder what is taking the great teen-Internet show so long to show up on television already.) Joey was, in other words, almost the total opposite of Katie Holmes, a woman who has spent the years since “Dawson’s Creek” becoming more and more opaque. A page in her diary could probably fetch millions of dollars, but I can’t imagine a person on this planet with enough knowledge of the strange circumstances of her life to fake it.

When Joey told her father how little he knew her, the list of things he didn’t know, but that we sure did, included Joey’s tomboy ways, her endless patience for Dawson and his speechifying about Spielberg, her discomfort with lipstick and other girls, her rower’s arms, and her strange physical habit of collapsing in on herself, looking down and squinching her face, or embracing her own shoulders and reducing herself to her smallest possible size. After “Dawson’s” ended, Holmes spent a few years trying to make a career for herself, mixing up middling romantic comedies with more edgy indies, playing the president’s child in the romantic “First Daughter,” the punkish chick who has sex with her black boyfriend in the first scene of “Pieces of April,” and the superhero’s girlfriend in “Batman Begins.” She seemed to be fumbling her way, in all likelihood, toward the kind of career James Van Der Beek now has, playing himself on a pretty solid sitcom. But then in 2005 she went and hooked up with Tom Cruise and solidified the strangeness of her persona: Who does that kind of thing, and why?

Since marrying Cruise, Holmes has basically taken to hiding in plain sight. Her image is everywhere, but she doesn’t act much and her interviews seem cagey or canned. She’s like a walking Andy Warhol silk screen: iconic, famous and totally mute. On the occasions that she has acted, the results have been pronouncedly odd. She turned up in the J.-Crew-catalog-cum-film “The Romantics” playing a supposedly passionate character who upends a wedding, but the most remarkable thing about the performance was that the character retained Joey Potter’s, or rather Katie Holmes’s, now insanely significant-seeming habit of physically folding in on herself, as if she were shying away from the world. Last year, she played Jackie Kennedy in the mini-series “The Kennedys” (a part she also played on the cover of New York magazine), which was like a riddle dressing up as a much larger enigma. Like the movie stars who give you a hint of the same persona every time they appear on screen — the Julia Roberts Guffaw, the Cruise Smile, the Hanks Benevolence, the Jolie Smolder — Holmes has a baseline quality, but hers is a void, a nullity: the Holmes Absence.

Which is what makes watching “Dawson’s Creek” today oddest of all: However irritating both Joey Potter and “Dawson’s Creek” could be, they were extremely concrete and knowable. Joey pulled faces and dished out insults and asked her best friend about his masturbating habits and sang a version of “On My Own” from "Les Miserable" that is still maybe the most embarrassing thing I have ever seen anyone do on TV. If the Holmes-Cruise divorce seems unlikely to answer all our questions about Tom Cruise, Scientology or the pair’s relationship (not that my fingers aren’t crossed), it would still be nice if Katie Holmes returns to something that looks a little more like normal. And maybe that would make it possible to watch Joey Potter without feeling weird again.