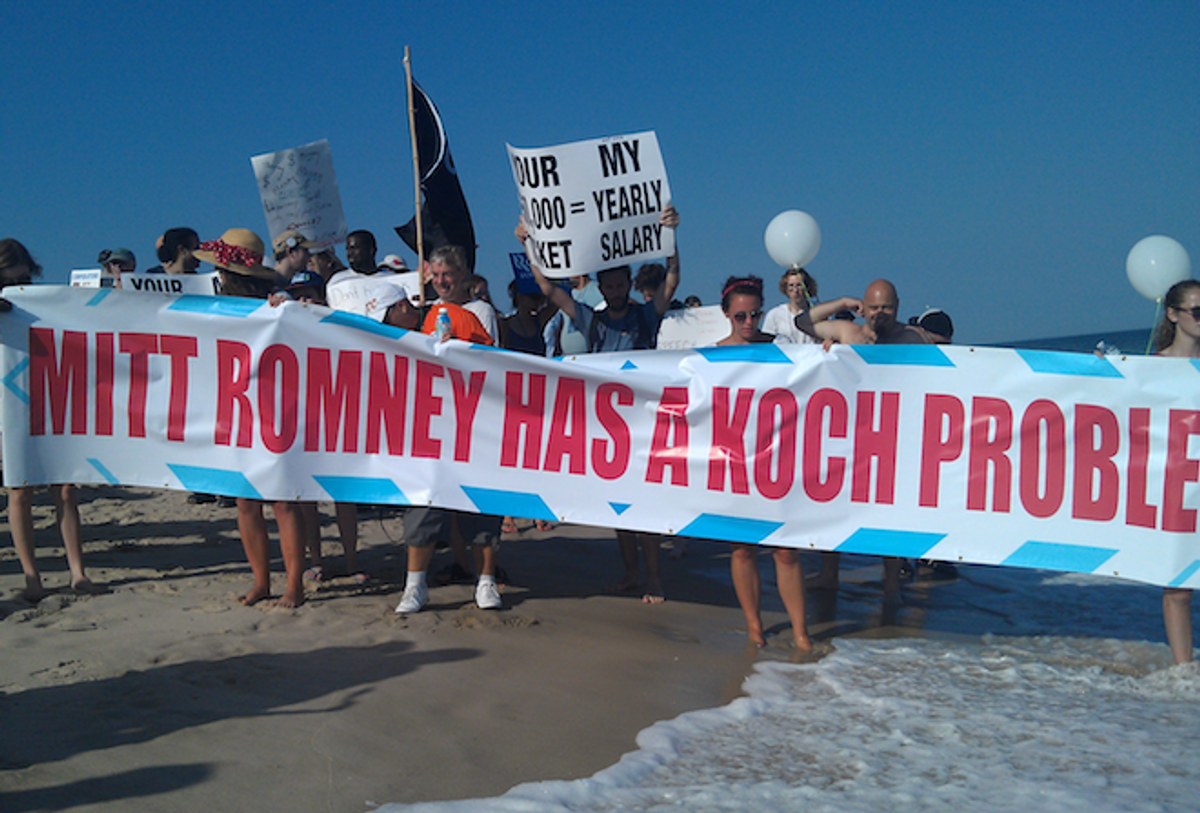 Looking down Southampton's Main Street with a squint, you could mistake it for a twee small-town American main street; a Rockwellian idyll with Star-Spangled Banners hanging from small clapboard shops. Let your eyes focus, though, and you'll notice the cars lining the street -- the Lamborghini, next to the vintage Mercedes, next to the Jaguar. Or you'll notice that the local boutiques are Michael Kors and Helmut Lang stores and that the real estate shop is a Corcoran office touting waterfront compounds for $25 million in the window. This, of course, is Main Street for the One Percent.

On Sunday, Republican presidential hopeful Mitt Romney swept through the Hamptons to attend three fundraisers at the private homes of the rich and richer-still. At a fundraising event held at the Southhampton summer house of oil billionaire and money-in-politics poster boy David Koch, suggested donations were $75,000 a couple -- nothing outrageous for political giving, Hamptons-style (relied upon in recent years by Democrats and Republicans alike). But this Sunday, something not seen in local memory also took a day trip to the Hamptons: a protest, about 200 strong, which ventured to Koch's beachfront backyard.

"This is an anti-corporate protest; this isn't about Republicans or Democrats -- I call them 'Democraps,'" said Nick Maurer, a Bronx-based Occupy supporter who joined the two busloads of protesters who traveled to Southhampton from New York City, courtesy of the United Federation of Teachers. "We need to be a presence in places like this, while they're hobnobbing and drinking Martinis," said Maurer, helping prop up a large banner with the words written in blood red: "Koch Kills" (a play on the pronunciation of the billionaire's name -- like "coke").

The protesters, who hailed from around Long Island and New York and who held a variety of progressive political belief sets, were a mixture of Occupy supporters, liberal Democrats, one or two Alex Jones–styled conspiracy theorists, and MoveOn members. MoveOn, who have long been controversial allies to Occupy, voted to endorse Barack Obama's campaign last month. The pro-Democrat propaganda was kept to a minimum on Sunday, however, in deference to fellow protesters, such as the young man with a scrawled sign reading, "No One for President, 2012." The liberal group did provide a small airplane which dragged the banner "Romney has a Koch Problem" across the bright blue sky as the protest approached the heavily guarded Koch compound.

State troopers, local police officers and a large Secret Service detail barricaded the protest base nearly three-quarters of a mile down the street from Koch's house. A break-off march carrying banners, noise-makers and an accompanying saxophonist charged onto the beachfront with a gaggle of reporters in tow, while bemused beach-goers looked on and pulled out their camera phones. The march reached the edge of where Koch's property touches the public beach, to be met by more Secret Service agents and police officers lining the dunes.

There was mixed reaction to the rag-tag marchers from others on the pristine Cooper's Beach. Southampton residents, who live in the small town year-round and generally do not share the wealth of the Hamptons summertime swarms, were generally supportive. "I think it's cool -- it's interesting. We've never seen a protest here," said 15-year-old Sabrina Carroll. "I agree with it," said 19-year-old college student and local resident Tommy Bush.

A handful of self-identifying One Percenters, themselves owning summer homes in the Hamptons, joined the protest. "I think it's everyone's responsibility to change the way elections are being run," said Chris Harris, wearing the ubiquitous polo shirt of the Hamptons summer resident, joined by a group of friends also protesting the undue influence of money in politics. Some of their wealthy, Hamptons-summering counterparts were less sympathetic. "Send 'em back," said one extremely tanned gentleman, standing on the beach in expensive swim-trunks and a large gold Rolex.

And indeed, there was no risk of the unconfrontational protest crowd attempting to set up camp or occupy the beach, where Calvin Klein's summer mansion sits a few (large) doors down from Koch's. Sunburned bodies piled back into buses and cars and headed back to their relative squalor away from Southampton's manicured beachfront homes. For a few hours, however, organizers were pleased to rupture the seclusion normally enjoyed by those who summer in the Hamptons.

"David Koch has $25 billion and is usually able to completely isolate himself from the world while influencing some of the most repugnant policies around without repercussions," said Danile Asher, 35, a lead organizer with the Long Island Progressive Coalition, which helped organize Sunday's action. "Today we showed that regular people can and will bring protests to David Koch's backyard."