After ignoring the Affordable Care Act in 2010, Democrats have begun using it as a political weapon this election 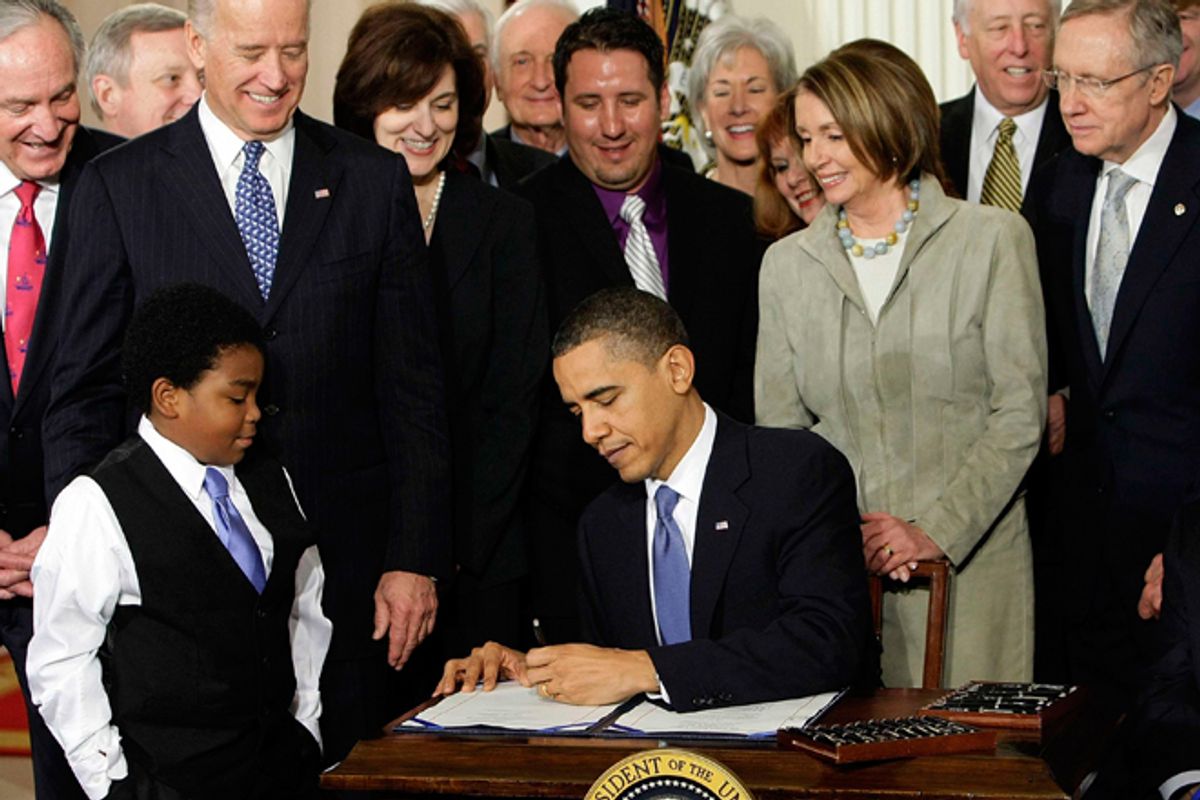 Fresh from a victory at the Supreme Court two weeks ago, Democrats are shifting out of the defensive posture they took on health care reform since it passed in 2010 and are beginning to attack Republicans who want to repeal the law. The Democratic Congressional Campaign Committee (DCCC), the campaign arm of House Democrats, is launching a new set of ads hitting seven Republican lawmakers ahead of the House GOP’s scheduled vote on repealing the Affordable Care Act on Wednesday. Today’s DCCC campaign, which comes on the heels of an earlier round of ads targeting 10 Republicans last week, highlights a woman named Carla whose life was saved by a breast cancer screening and warns that Republicans want to repeal popular provisions of the law that could help her, such as free preventative health care screenings for women.

“Democrats continue to be on offense as House Republicans vote this week to protect the profits of their insurance company campaign donors instead of consumer protections for patients and lower prescription drug costs for seniors,” DCCC Chairman Steve Israel, a Democratic Congressman from New York, said in a release.

The aggressive campaign from House Democrats on health care stands in stark contrast to their approach just two years ago, when Democrats were often reluctant to highlight Obamacare, and many even touted their opposition to it. “The difference between 2010 and 2012 is the difference between night and day,” a Democratic aide on the Hill told Salon. “In 2010, Democrats were trying to pass the health insurance reform bill but [were also] on defense defending it to the American people. In 2012, Democrats are on offense as Republicans do more of the same political games to protect insurance companies instead of creating jobs and protecting consumers."

As the Washington Post’s Chris Cillizza noted in September of 2010, summing up the conventional wisdom, “The evidence on the campaign trail seems to suggest that healthcare is more burden than boon to targeted Democrats this fall.” Politico reported that same month that not a single Democratic incumbent in the House or Senate had run a pro–health reform TV ad since April. The paper quoted one anonymous Democratic strategist as saying  it would be “political malfeasance” to run such an ad. Democrats assumed the crouch posture almost immediately after President Obama signed the Affordable Care Act into law that spring. Reuters noted a week after the signing, “While Obama made flying visits across the country to tout the new legislation, a number of key Democrats who led the charge for health care reform seemed to keep a low profile and are doing little to beat the drum.”

This was perhaps not surprising at the time, considering that polling on the law had remained stable for months and showed opposition consistently outpacing support by single digits. While much of this opposition was fueled by misinformation about the law, Democrats made little effort to shift public perception before Election Day and instead opted to hunker down. Dems had to defend a huge number of seats in moderate or Republican-leaning districts that they had won in 2006 and 2008, and the GOP clearly held the upper hand, given the dire state of the economy at the time. Democrats in tough races took one look at the polls and decided they should avoid talking about their ‘yea’ vote on health care whenever possible. Meanwhile, some conservative Dems who voted against the law went so far as to adopt the GOP stance. South Dakota’s Stephanie Herseth Sandlin, Alabama’s Bobby Bright and Texas’s Chet Edwards all ran ads touting their opposition to Obamacare and bashing the law using similar talking points as Republicans did.

So what changed? Herseth Sandlin, Bright and Edwards tell part of the story. All three of them lost. The election results dispatched with the notion that being a Democrat who opposed the law was a recipe for political success -- of the 30 Dems who voted against the Affordable Care Act and then stood for reelection, 17 lost anyway. Their wipeout also means that there are simply fewer Democrats who voted against the law today than there were two years ago, which makes the party more united in its support of the law than ever before.

The Supreme Court’s ruling also certainly plays a role in affirming for good that the law is constitutional and providing a potent weapon for Democrats to use against Republicans still intent on repealing it.

“I think it is a smart move because the Supreme Court has ruled that the law is Constitutional and people want to move on from the past two years of political fights,” said Eddie Vale, the communications director for Protect Your Care, a progressive group defending the Affordable Care Act. “The situation is now flipped on the House Republicans, and any time they talk about repeal, we're going to hit them for taking away people's benefits that are popular, such as bringing back pre-existing conditions, throwing seniors back into the donut hole and kicking young adults off their [parents'] insurance.”

While the topline approve/disapprove polling averages may not have shifted much -- the country remains evenly divided on the law -- there is plenty of polling evidence to suggest positive movement for Democrats. According to a recent Kaiser poll, a plurality of Americans support the Supreme Court’s decision. More important, a clear majority -- 56 percent -- now say they think opponents of the law should give up and move on. Just 38 percent think Republicans should continue trying to block implementation of the law. A recent Bloomberg poll found that Americans strongly support most of the provisions in the law and that few want to repeal in its entirety when given the option of also expanding it or preserving certain provisions.

Bob Shrum, a Democratic strategist who worked for John Kerry’s 2004 presidential campaign agreed Democrats' embrace of the law is good politics, but wishes they had done it sooner. “Why didn’t it happen two years ago? I don’t know -- it should have happened,” he told Salon. “I think from the beginning, we should have leaned more forward on health care and it’s smart to do it now.” Shrum noted that health care was a winning issue for Democrats long before misinformation about "death panels" sullied the picture, and he said he expects the political ripple effect of the law to only improve going forward.