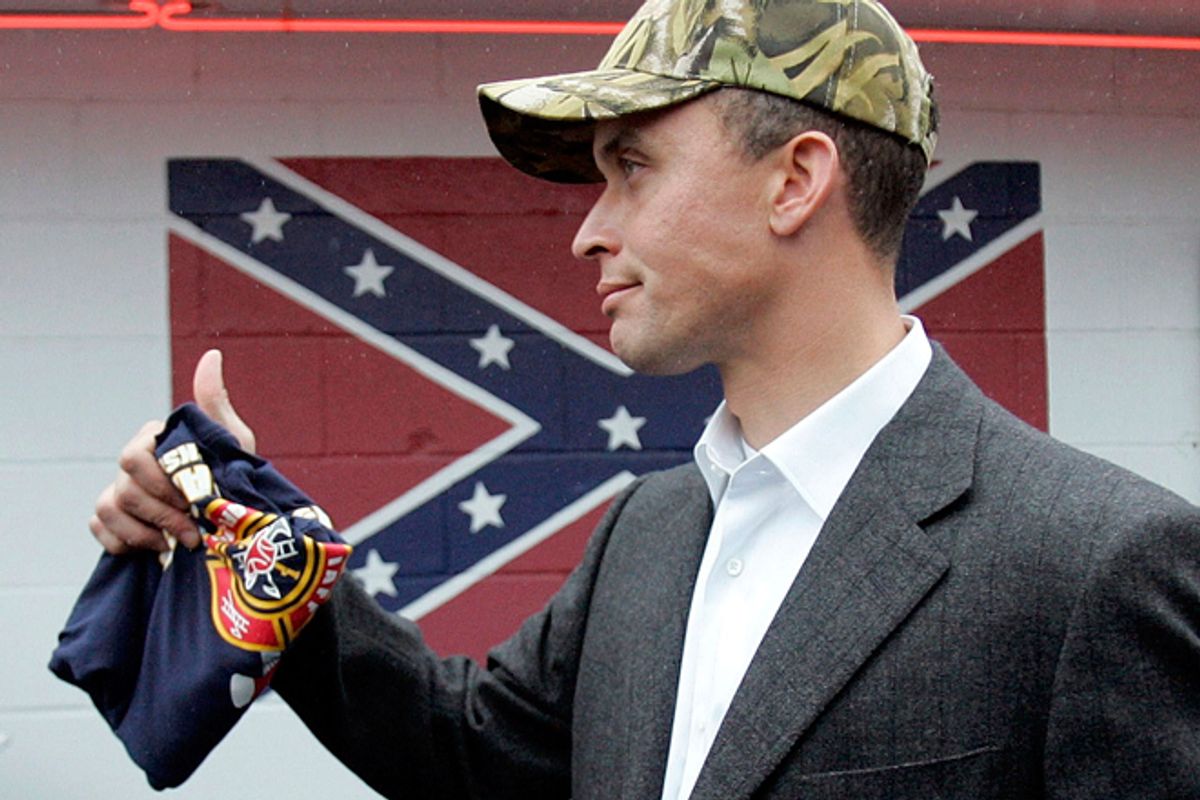 Harold Ford, Jr. is the walking, breathing embodiment of virtually everything rotted and corrupt about the American political class. He entered Congress at the age of 26 only by virtue of nepotistic benefits: while in law school, he ran for the seat long held by his father of the same name (he then promptly failed the test for admission to the Tennessee bar). In Congress, he voted for de-regulation of Wall Street (which helped precipitate the 2008 financial crisis); to authorize the Iraq War (and then harshly criticized Democrats who opposed it and refused to admit its error even as late as 2007); in favor of a Constitutional amendment to ban same-sex marriages (The Advocate branded him "anti-gay"); and was one of the few Democrats to support the credit-card-industry-demanded bankruptcy "reform" bill that made it harder for impoverished consumers to discharge consumer debt.

After Tennessee voters drove him from Congress by rejecting his 2006 Senate bid, Ford immediately cashed in on his servitude to Wall Street and peddled his D.C. influence by becoming Vice Chairman and Senior Policy Adviser of Merrill Lynch. During Ford's tenure, "Merrill Lynch nearly collapsed, was bailed out by US taxpayers, and went through a troubled merger with Bank of America," yet he nonetheless received $2 million a year in guaranteed salary plus what were almost certainly substantial annual bonuses. He left what had become Bank of America Merrill to become a Senior Managing Director at Morgan Stanley, at which time he bought a $3 million co-op in Manhattan. Upon leaving Congress, Ford also cashed in by becoming the last Chairman of the corporatist Democratic Leadership Council ("last" because, typifying his career, the DLC ceased to exist under his leadership). He cashed in further by becoming a Fox News contributor, until he left for MSNBC.

Reflecting the interests he typically serves so eagerly, Ford recently attacked Democratic criticisms of Mitt Romney's career at Bain Capital on the ground that "private equity is a good thing in many, many instances." So that's Harold Ford, Jr.: opportunistic, craven, sleazy nepotistic corporatist who has made a career out of converting his unearned political influence and loyalty to the banking industry into large wads of cash.

This morning, Ford, as he often is, was on Morning Joe (independently significant is that fact that one of the most prolific NBC/MSNBC political commentators -- a Democrat -- is also a senior Wall Street executive). The show devoted a six-minute segment to Esquire‘s Tom Junod, who -- as I noted earlier today -- has just published a worthwhile and heartfelt article entitled "The Lethal Presidency of Barack Obama," which examines in depth the multiple ways the President has seized the power to kill; in one section, Junod reports on the U.S. killing of 16-year-old Abdulrahman Awlaki in Yemen, and Esquire has published that section separately under this headline: "Obama’s Administration Killed a 16-Year-Old American and Didn’t Say Anything About It. This Is Justice?" In the Morning Joe segment, Junod repeatedly documented the numerous innocent Muslims -- including children -- that are continuously killed by Obama's attacks, such as the 16-year-old Denver-born son of the Islamic preacher, a mere two weeks after his father was killed.

You just have to watch the reaction of Ford, neocon Dan Senor, and Mike Barnacle to appreciate the soulless rot that leads people so cavalierly to defend and dismiss the continuous killing of innocent Muslims by the U.S. But it's Ford's smirking, self-satisfied, effete ignorance -- from a warmonger whose delicately manicured hands have never been and will never be near any of the carnage he reflexively defends -- that is particularly nauseating. Like most mindless defenders of U.S. violence, Ford just repeatedly utters the word "Terrorist" over and over like a hypnotic mantra.

Even after Junod describes the heinous death of the indisputably innocent American teeanger, Ford just smirks and pronounces that it's better to Kill The Terrorists than to capture them. There's nothing unique about Harold Ford, Jr. -- as I said, he's just the personification of the standard Beltway sicknesses, and the vacant "arguments" he makes to justify drones ("THE TERRORISTS!") are the typical ones offered up -- but there's something about the way Harold Ford, Jr. speaks here, and who he is, that really vividly conveys what motivates this mindset:

So here's the discussion in a nutshell:

Junod: Our government killed a 16 year old boy and it won't even say why.

Ford: Yeah, killing terrorists is cheaper than capturing them.

Senor: No, we need to tortur-- interrogate them first.

Junod: But we're talking about a 16 year old boy who wasn't a terrorist.

That's depressingly accurate. Meanwhile, several commenters have asked about the photograph of Ford at the top of this column: it comes from an infamous incident when Ford was running for the Senate in Tennessee in 2006 and deliberately posed, wearing a camouflage hat, in front of a Confederate flag, sparking serious (understandable) fury in a number of precincts. Here is a local Nashville columnist, A.C. Kleinheider, writing about this event, under the headline "The political nihilism of Harold Ford Jr.," and here are two representative African-American commentators -- here and here (Baratunde Thurston at JackandJill Politics) -- discussing Ford's conduct.