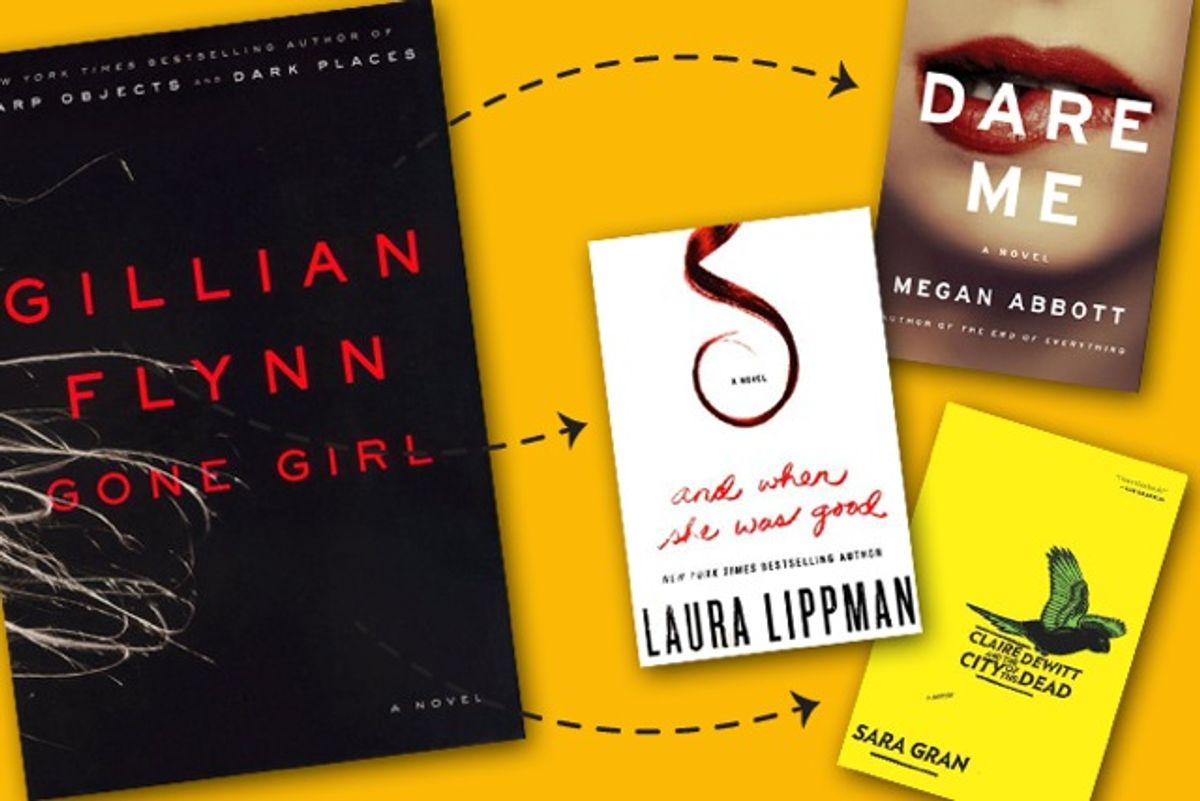 I’m not yet certain if Gillian Flynn’s "Gone Girl" is my favorite crime novel of 2012, but it will almost certainly be up there. And so far I’d say it’s a favorite of a great many people, hitting No. 2 on the New York Times bestseller list its first week out and rising to the top of the list this week. There hasn't been a day in the past six weeks without someone in my Twitter feed referencing the book.

Flynn’s book, to my mind, is a sign of what people crave and what they want in crime fiction: Books that take risks and present characters with whom you identify (even though you may not necessarily identify with their actions), a plot with a ton of surprises, excellent writing, sharp humor, dark doings and something “extra.” Frankly, while I’ve become bored with a lot of the standard mystery fare -- years of writing genre columns will do that -- I am really jazzed about a growing group of female crime writers who are stretching the genre in wonderful ways, their voices and concerns setting an awfully high bar for debuts to come.

Anyway, you’ve heard of "Gone Girl," read it, loved it. Now what? Here are some suggestions, largely from women authors, but also some from men who fit the bill:

"In a Lonely Place," Dorothy B. Hughes (1947) — My all-time favorite crime novel, as close to perfect as these things come. Very different from the (excellent) 1950 film. Do you want to know how to write a narrator who so completely fools himself while the reader knows exactly what is going on? Then read this book. Other great Hughes novels: "Ride the Pink Horse," "Dread Journey," and "The Expendable Man," which was just reissued by NYRB Classics.

"Beast in View," Margaret Millar (1958) — Currently, and foolishly, out of print. A woman gets mysterious phone calls that drive her to the brink. Except there’s a whole lot more going on. Margaret Millar was married to Kenneth Millar (aka Ross Macdonald) and actually published before he did, but she is rather neglected now. See also: "A Stranger in My Grave" (1960), a great, if slightly dated, examination of female domestic anxiety and manipulation on the part of those who claim to know best, and "The Fiend," in which the most sympathetic character is a pedophile -- and Millar pulls that trick off brilliantly.

Basically anything by Patricia Highsmith, but the Ripley novels are too easy, so I’ll suggest "Deep Water" (1957) or "Edith's Diary" (1977). In addition, I would recommend Joan Schenkar’s thorough, almost operatic biography, "The Talented Miss Highsmith," published by St. Martin’s a few years ago.

"The Specialty of the House and Other Stories," Stanley Ellin (1978) — Out of print, but probably not for long. It contains the vast majority of Ellin’s short stories collected in one volume. Do you want all manner of moral dilemmas and psychological insights? Ellin was the goddamn man. Also, his 1958 novel "The Eighth Circle" is the best private detective novel I have ever read because it’s about existential dilemmas and moral quandaries — and whether love can, indeed, save people -- more than cases.

Two short series of masterpieces published in the 1980s — the Hoke Moseley novels by Charles Willeford (start with "Miami Blues," and then three more follow) and the Factory novels by Derek Raymond (start with "He Died With His Eyes Open," work your way through to the utter gobsmacking visceral horror that is "I Was Dora Suarez," and read "Dead Men Upright" because you have to finish the series).

"Nice" by Jen Sacks (1998) — A nice girl has a bit of a problem: She can’t actually break up with anyone, so she kills them. Jen never published another book, though I know she worked on at least one other. "Nice" came out in the midst of chick-lit-mania and was a beautiful embrace/subversion of the whole Bridget Jones thing.

The "Tart Noir" anthology (2002) — A long, long time ago in Internet years, a handful of female crime writers felt they weren’t getting their due, so they banded together for a website (TartCity.com, which published my first hilarious, ridiculous, probably embarrassing, but whatever, article on how to be a writer groupie) and then recruited others for this anthology. Lauren Henderson, Stella Duffy, Laura Lippman, Val McDermid, Chris Niles, Karin Slaughter and pretty much everyone else included are worth tracking down and reading. Though I must admit it's strange to look on Tart Noir with a nostalgic eye, since the website was very instrumental to my getting started in the crime fiction world. Could there be a Tart Noir 2.0 some day? And how would it look? Whom would it include?

"Out," Natsuo Kirino (2002) — Not enough of Kirino’s work has been translated for me to judge, but this is the standout. A woman kills her husband, three of her co-workers help dismember the body and dump it, and someone else seems to know, but who? So very creepy. So very brilliantly executed. I still remember how horrified I felt as I read it a decade ago.

Speaking of Laura Lippman, her upcoming book "And When She Was Good" (August 14) is really freaking great. It's about a suburban madam who has to reckon with her past and the careful façade she’s built to raise and protect her son. I will say no more. Until then I would recommend most everything she’s written, but in particular "I'd Know You Anywhere" (2010), "Every Secret Thing" (2003) and "To the Power of Three" (2005), as it gets into the noirish tendencies and behavior of teenage girls.

Megan Abbott has cornered the “dark desires of teenage girls” territory, too, with the upcoming "Dare Me" and last year's "The End of Everything," but before then she was doing excellent period noir, of which the best is clearly "Bury Me Deep" (2010).

Sara Gran's body of work also stands out, largely because she picks a certain genre for each book -- horror for "Come Closer" (2003), 1950s noir for "Dope" (2006) and the PI novel for "Claire Dewitt and the City of the Dead" (2011) -- and subverts it enough to make each book wholly distinctive. "Claire" is the first in a new short series, and it features some of the best writing about 1980s Brooklyn and girlhood I've read in a while.

I can’t entirely leave out the Scandinavians, so my suggestions would be Karin Alvtegen ("Guilt," "Shame," "Betrayal," "Missing," etc.) and Karin Fossum’s Inspector Sejer novels.

Also be prepared to hear a ton about Attica Locke. I loved her debut, "Black Water Rising," and her next book, "The Cutting Season," is even better. No wonder Dennis Lehane made it his first choice for his Harper imprint. Look for it on September 18; it’s an excellent mystery with great characters, a boatload of history about slavery and murder, and much more.

Somewhat obvious, more recently published choices: All the Jackson Brodie novels by Kate Atkinson; all of Tana French’s work ("The Likeness" remains my favorite); Sophie Hannah’s Zailer/Waterhouse series (though to be fair, I think she could tell the same amount of story and cut at least one-third of a book down, but YMMV); all three novels by Emily St. John Mandel; Hilary Davidson’s "The Damage Done" and "The Next One to Fall"; Erin Kelly’s "The Poison Tree" and "The Dark Rose"; Elizabeth Hand’s "Generation Loss" and "Available Dark"; Christa Faust’s "The Money Shot" and "Choke Hold"; Katie Kitamura’s "The Long Shot" and "Gone to the Forest"; and Sara J. Henry’s "Learning to Swim."