An American banker is shocked to be held accountable in Britain 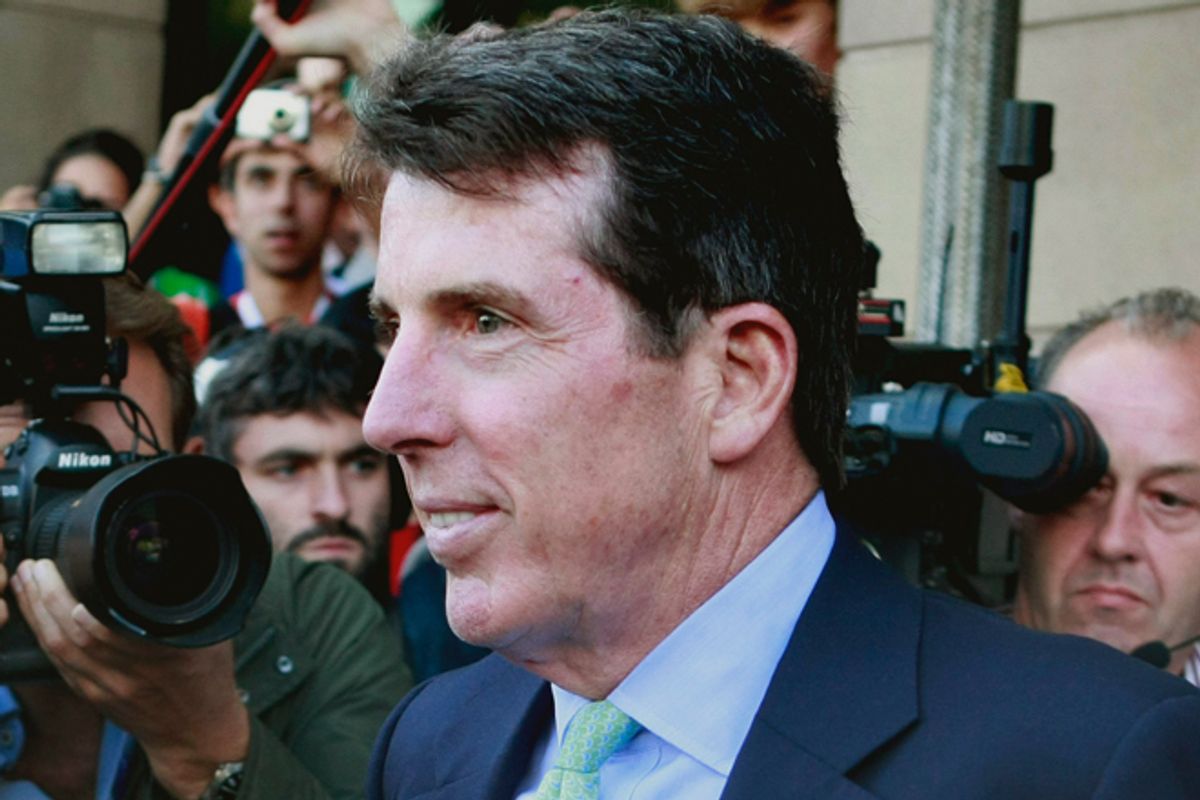 Gretchen Morgenson, the New York Times business reporter, yesterday wrote about aggressive action taken by British financial authorities against top Barclays executives in connection with illegal manipulation of LIBOR interest rates, including the bank's Chairman, Marcus Agius, and its CEO, Robert E. Diamond Jr., both of whom were forced out of their jobs. In doing so, Morgenson bluntly summarizes the general, governing rules of American justice for financial elites:

One of the most revealing exchanges in the Barclays documents came when a bank official tried to describe why Barclays’s improper postings were not as problematic as those of other banks. “We’re clean but we’re dirty-clean, rather than clean-clean,” an executive said in a phone conversation. Talk about defining deviancy down.

"Dirty clean" versus "clean clean" pretty much sums up Wall Street’s view of cheating. If everybody does it, nobody should be held accountable if caught. Alas, many United States regulators and prosecutors seem to have bought into this argument. . . .

MR. DIAMOND seemed shocked to be pushed out. An American by birth, he probably thought he’d be subject to American rules of engagement when confronted with evidence of wrongdoing at his bank. You know how it works on this side of the Atlantic: faced with a scandal, most chief executives jettison low-level employees, maybe give up a bonus or two — and then ride out the storm. Regulators, if they act, just extract fines from the shareholders.

These, of course, are exactly the same rules that apply to America's political elites as well. It's why none of the perpetrators of America's worldwide torture regime or its systematic warrantless eavesdropping on Americans or the deliberate destruction of incriminating evidence has faced an iota of legal accountability. It's why the 2008 Congress passed a law that had no purpose other than to retroactively shield the nation's telecom giants from all liability for their role in the illegal spying. It's why a bipartisan cast of prominent political officials feels free to openly receive money from and to offer material support to a designated Terror group (MEK) without the slightest fear of punishment, even though ordinary, powerless Muslim Americans have been severely punished for giving far less support to designated Terror groups. The single most remarkable (and revealing) fact of the Obama presidency may very well be the lack of a single prosecution of Wall Street executives for the massive fraud that precipitated the 2008 financial crisis.

As long as we maintain the impunity Morgenson describes, no rational person should expect anything other than pervasive elite corruption and lawbreaking. If you remove the fear of criminal punishment for the nation's political and financial elites -- as we have done -- what possible constraint on their behavior does anyone think will remain? As Morgenson says, the Barclays CEO seemed shocked that he was being subjected to any form of accountability in Britain because, as an American, he's accustomed to knowing there will be none for those in his class; in other words, he engaged in this behavior so cavalierly because he was incentivized to do so by the knowledge that he would face no consequences.

The next time an American political official is tempted to torture people or spy on Americans in violation of the law or destroy court-ordered evidence of wrongdoing -- or the next time Wall Street executives are tempted to commit institutional fraud for personal enrichment -- what incentives does anyone think will exist for them to refrain? During the debate over whether the Obama administration should criminally prosecute Bush officials for War on Terror crimes, American media figures, voicing the consensus of the political and media class, insisted that it was more important to ensure that such crimes did not happen in the future than it was to punish past transgressions. That was the ultimate expression of vapid illogic: if the signal is sent that the politically powerful will not suffer criminal punishment for these crimes, then, by definition, it's impossible to ensure that the crimes will not be committed again in the future. The opposite is achieved: one will ensure that they are repeated because the incentive has now been created to do so.

This principle -- that shielding elites from punishment for their crimes ensures future rampant criminality -- is as basic as it gets to the rule of law. As Alexander Hamilton put it in Federalist 15:

It is essential to the idea of a law, that it be attended with a sanction; or, in other words, a penalty or punishment for disobedience. If there be no penalty annexed to disobedience, the resolutions or commands which pretend to be laws will, in fact, amount to nothing more than advice or recommendation.

In addition to the British action against Barclays, a Spanish court recently announced what appears to be a serious criminal investigation of the head of that country's largest mortgage bank (also a former IMF Chairman) for mortgage fraud and price-fixing. As one of the leaders of Spain's version of the Occupy movement (the May 15 movement), filmmaker Stéphane Grueso, told Democracy Now's Amy Goodman last week:

Well, you know, what happens is that, finally, finally it happens that, maybe, eventually, one of his kind maybe is going to pay. Because, you know, we citizens, we have this impression that, you know, no one of these big guys have any problem, never. They do what they want. They steal. They lie. And never happens anything. Well, now, today, maybe it’s starting to happen, something. So I’m very, very happy.

This kind of accountability is virtually inconceivable in the U.S. Many people love to hail President Obama for ending torture and CIA black sites; aside from the reasons that's untrue in its own right, the reality is the opposite: by so aggressively shielding the torturers from all forms of legal accountability (criminal, civil and international), the incentive has been created to do it again. The same is true of illegal spying, and systemic financial fraud, and all of the other elite crimes over the last decade that wreaked such destruction. That a New York Times reporter can so bluntly set forth the rules of American justice for elites in this manner with so little notice or objection is an indicator of how normalized this has all become.

As always with any discussion of elite immunity, it's crucial to note that what makes this development such a particularly warped travesty is that the very same elites who enjoy this immunity have created the world's largest, and the Western world's most oppressive and merciless, penal state for ordinary citizens. Because we have removed the fear of punishment for elites which the rule of law was designed to impose, something else needs to replace that fear as a constraint on elite behavior; the only viable candidate that I can see is the sort of mass citizen disruptions that have been seen in many Western cities and for which the Occupy movement provided a preliminary template. Fear of sparking that type of citizen unrest -- through limitless elite corruption -- can be a meaningful constraint on its continuation.

On a different note, Mehdi Hasan, the former New Statesman columnist now at Huffington Post UK, has an excellent Op-Ed today on the pervasive, intense Islamaphobic hatred which most Muslims routinely encounter.

Related to that, Esquire's Tom Junod has a worthwhile (albeit rather flawed) article entitled "The Lethal Presidency of Barack Obama" which examines in depth the multiple ways the President has seized the power to kill; in one section, he reports on the U.S. killing of 16-year-old Abdulrahman Awlaki in Yemen, and Esquire has published that section separately under this headline: "Obama's Administration Killed a 16-Year-Old American and Didn't Say Anything About It. This Is Justice?" Why does Junod have to be so gauche as to examine such unpleasantries in an Election Year? He must want Romney to win.