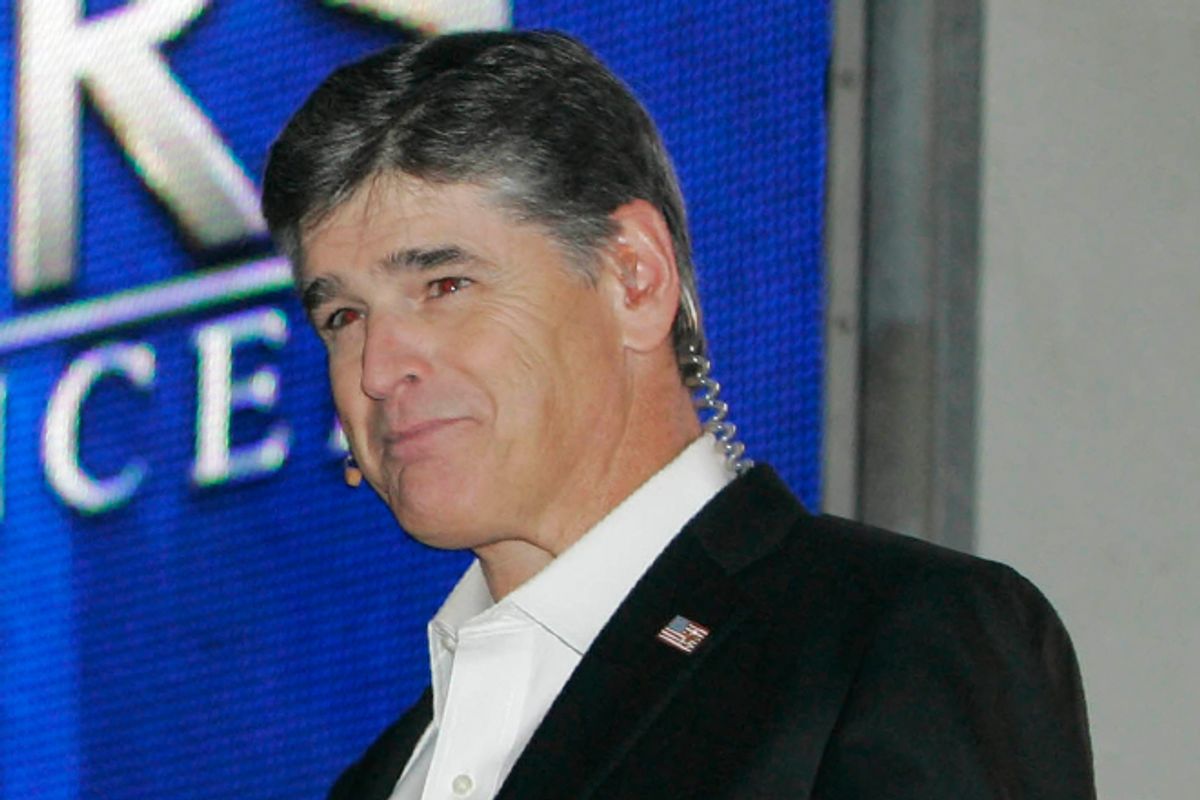 Sean Hannity wants you to know that a congressman said the word "madrassa" and that is not OK. “This is just one more outrageous statement from the congressman. And meanwhile, a top Muslim Brotherhood official in Egypt is once again calling for jihad against Israel,” Hannity said on Fox News last night, not even catching his breath before connecting a Democratic lawmaker from Indiana and the Islamist party in the Middle East, thousands of miles away.

The congressman drawing Hannity’s ire is Andre Carson, one of only two Muslims in Congress, who gave a speech to a Muslim audience in May suggesting that other faith-based schools could learn from the successful innovations in education Islamic parochial schools have made in recent years. His comments, which perhaps could have used more clarity, have since exploded in the conservative blogosphere, which views Carson’s remarks as a call to convert America's public schools into Islamic indoctrination institutions. Ironically, Carson’s speech came at a conference on ending Islamophobia.

But Hannity offered Carson none of the benefit of the doubt he would have given a Christian evangelical calling for schools based on Judeo-Christian biblical values. Instead, he alleged that Democrats have previously accused Republicans of being bigoted for using the word "madrassa," so he was merely doing the same.

For analysis, Hannity gave free rein to Brigitte Gabriel, one of a handful of activists who have careers out of preaching a proudly anti-Muslim message about terrorism and Shariah law, the Islamic religious code that is supposedly making inroads in the U.S. legal system. She explained that Islamic schools must be bad because Muslims have not produced much intellectually. “Show me of all the madrassas in the Middle East and across the globe, what innovation came out of them? Where are the scientific advancement? ... Where are the Nobel Prize winners?” she demanded. In fact, there are several Muslim Nobel laureates, who likely all went to madrassas as the word merely means “school.” And as Gabriel has repeatedly noted, President Obama studied at a madrassa in Indonesia, so there’s one right there.

Hannity spent the second half of the segment on the Muslim Brotherhood, without even bothering to assert a connection between the group and Carson. While Gabriel is a fringe figure, Hannity is a mainstream conservative, and his willingness to elevate her and nonchalantly connect a duly-elected American lawmaker who happens to be Muslim to Egypt's Muslim Brotherhood lays bare the casual bigotry against Muslims that has become tacitly accepted on the right today. It’s not necessary outright Islamophobia (though in the case of Gabriel it clearly is), but Hannity is careful to avoid that. Instead, it's a kind of Islamo-squamishness -- discomfort with any references to the word “madrassa" and questioning that the person uttering the word is likely up to no good, along with all his Muslim pals.