Secrets of the Muslim bathroom

The lota has torn apart relationships and embarrassed first-generation kids like me. So what is it? Let me explain 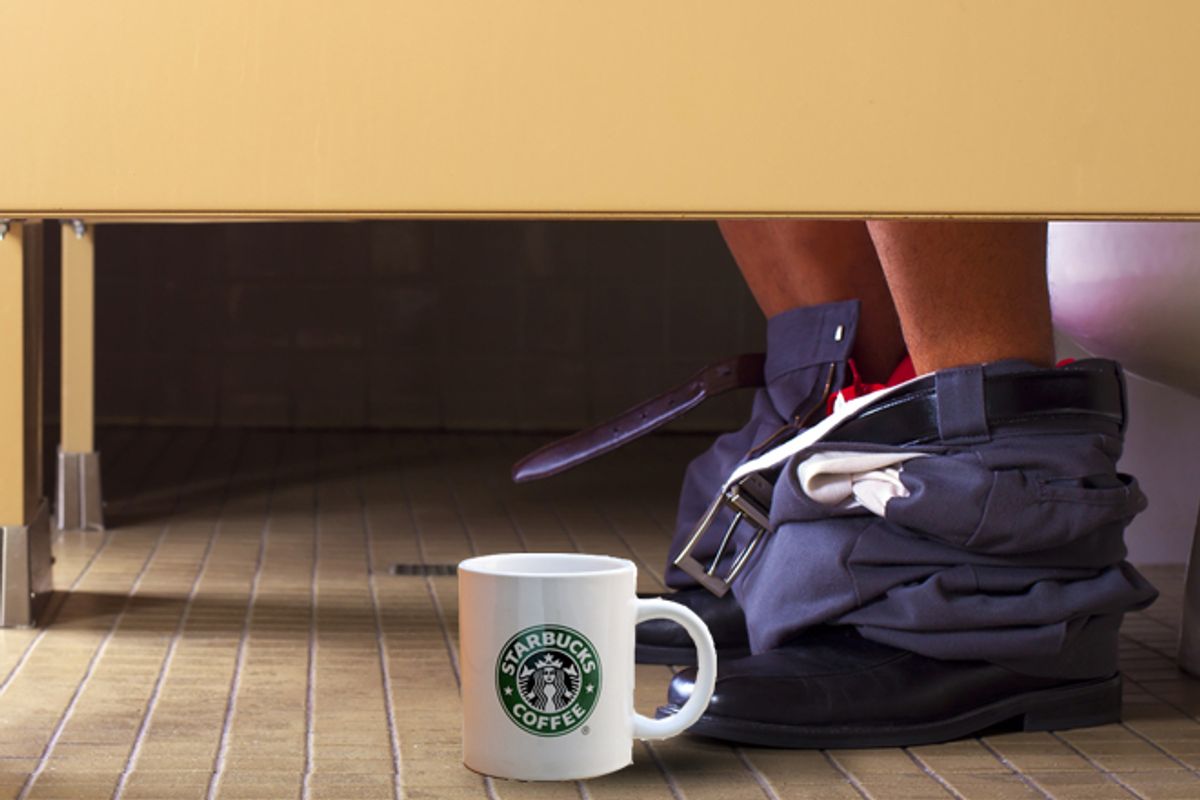 In America, Muslims must think like Jason Bourne, practicing our rituals with clandestine skill to avoid awkward confrontations. For instance, it’s not easy to find creative space to pray while providing logical explanations to those who find you in mid-prostration. “I’m doing Arabic tai chi,” you might say when someone sees you crouched in a stall at the Gap. “It’s an … Eastern thing.”

Or, what if you get caught doing the pre-prayer ablution, wudu, that requires Muslims to wash their hands and feet five times a day? “Uh, my foot is in the office restroom sink because I couldn’t pay my water bill,” you might say. “Rough economy, you know?”

Added to this list is the “lota,” which is used in Muslim communities, including most South Asian populations, to aid in cleansing rituals. The lota is a magical chalice for our peoples – it’s a traditional hand-held vessel that contains water to assist in our bathroom “activities.” Using a baseball lineup analogy, toilet paper and moist wipes are a “leadoff” hitter, but the lota functions as the “clean-up hitter,” the player with the power to bring all the players to home plate.

But the lota can be confusing to Americans. Not long ago, an American Muslim family was detained at the airport and interviewed by the FBI. They had aroused suspicion by “lingering” near the airplane bathroom and asking for a “cup” to perform a “religious custom dictating cleanliness.”

I can certainly sympathize. I have confused many co-workers with my creeping “stealth lota jihad.” At my former law job, I once used a venti Starbucks cup as a temporary, emergency lota. I thoroughly washed the caramel frap residue and filled it to the brim with tap water.

“Hey Waj,” I heard just as I was about to enter the stall and liberate myself. It was my boss. “Whatcha’ got there?”

“Oh, this? Just, uh, was thirsty,” I replied. We stared at each other for several, uncomfortable seconds. “Yup – thirsty.”

And then I proceeded to drink the water.

But the lota shouldn’t be such cause for embarrassment. It has always existed -- right under our very noses and bottoms. For Muslims, it is the homely girlfriend we adore but are ashamed to date in public. We keep it hidden out of self-loathing and fear. As America’s unofficial ambassador of “Eastern Toilet Etiquette, ” however, I say it’s time to explain a few things.

The origin of the lota

Muslims follow the traditions of their Prophet Muhammad, who performed istinja, the act of washing the private parts with water after committing najis, which is the “filth” we commonly refer to as the numbers “1” and “2.” Paper and certain rocks can also be used to facilitate the process, but water is the preferred accomplice.

Furthermore, Islam requires this specific “act” to be performed by the left hand, which is synonymous in South Asia for being the hand that is used only for “other things.” It is recommended for Muslims to perform most actions, including eating, with their right hand.

Naturally, I happen to be the left-handed minority within a minority. As such, I have been treated by most fellow Muslims like a circus freak, leper or the local chaiwallah possessed by the local toilet jinn. This adds to my lifetime of traumatic “South Paw” episodes, including having perpetual pen smudges on my left hand and being seen as mentally challenged throughout elementary school due to my inability to use right-handed scissors.

At a recent South Asian Muslim wedding, I made the fatal mistake of taking biryani from the buffet tray with my left hand. With the visual acuity of an intolerant, bigoted eagle, my aunt spotted the alleged criminal act and loudly admonished me in front of my peers: “You took food with the left hand?! We don’t eat with the left hand – only the right hand. The left hand is used for … 'other things.'”

Lotas come in all shapes and sizes

Many individuals are selective and take tremendous pride in their lota of choice. Personally, I ascribe to the “bigger is better” lota philosophy. During my UC Berkeley college days, my roommate and I purchased one from Wal-Mart that we named “Excalibur.” Wielding this five-pound behemoth watering jug required strength, discipline and skill. Each time we successfully used this intimidating instrument, we felt like we had just unsheathed the famed, Arthurian sword from the stone. It was our scatological light saber and a daily reminder of our virility and manhood.

Traditionally, the lota resembled a tea pot or an exotic genie lamp with a large spout made of brass or copper. Due to an urbanized, Western lifestyle, however, the once-limited definition of what could be classified as a lota has evolved and expanded. Plastic watering jugs are the new, preferred instrument of posterior purification in America. Some Muslims and South Asians believe in keeping their lotas hand-held and within reach, often times affixing them to the wall as manual bidets.

Traditionalists insist that the only lota that can properly perform its intended duty is the copper or brass vessel commonly found in Pakistan and India. They use poetic, romantic language to adulate this criterion lota and refuse to use any other instrument, similar to seniors who reject CDs and insist that “everything sounds better on vinyl.”

However, most agree that no respectable adult should dishonor their namesake by using plastic cups from fast food restaurants as lotas in their homes. It reeks of laziness and a lack of civility; a person who cannot even bother to invest time in purchasing a proper lota is probably unreliable and unsatisfactory in other areas of their life. Sadly, a few families and especially ignorant, young, single folk continue this shameful practice.

Growing up with the lota

The lota extracts a tremendous toll on one’s emotional well-being during adolescence. In fact, I never knew what “streaky underwear” meant until college. I used to nod my head, laugh and pretend I knew what my friends were talking about, just like when they mentioned “pork chops,” “meat loaf,” “cardigans,” “wearing shoes in the home” and “keggers.” When visiting friends’ homes and doing the deed, I frantically searched their bathrooms for the lota that would sadly never come.

Once, during high school, my non–South Asian friend visited and asked to use the restroom. Upon emerging, he asked,

“Dude, why is there a flower vase next to your toilet and clear water on the floor?”

My smoking gun was a cracked, plastic watering jug sitting next to the toilet. The leaky lota betrayed me!

“Dude, there are no plants in the bathroom,” he responded.

“Right, good observation. Let me order you a pizza now. Any toppings you want.” I bribed him with cheese-y goodness, but our relationship was forever strained.

Love in the time of the lota

Not all practicing Muslims use a lota. This lack of lota use significantly affects budding relationships and plays heavily in the dating game. Lota users are often like gullible teenage girls blinded by passion and the naïve hope that they can “change” the non-lota user after marriage. For South Asians who fall in love with non–South Asians, they plot the “perfect” moment to unleash their lota secret.

“Bro, once she falls in love with me, that’s when I’m busting out the ‘lota conversation.’ I’ll wait until she’s emotionally invested, and that’s when I’ll tell her --  ‘I lied. I don’t use the jug to wash my feet. It’s to wash my ass.’ She’ll forgive me, try it out, and realize it’s amazing,” assured an overly confident friend of mine about his impending lota blitzkrieg. The couple broke up shortly thereafter.

Recently, a friend of mine refused to consider a hot, smart, eligible woman as a potential partner purely based on the missing lota in her apartment bathroom.

“Bro, she doesn’t have a lota. I’ve used her bathroom. It’s not there.”

“Maybe it was hidden behind the toilet? Some people keep it in the cabinet under the sink,” I replied, giving her the benefit of the doubt.

“No, bro. I checked. Nothing. Not even a plastic cup. I can’t be with a woman who doesn’t use lota. That says a lot about a woman’s personality, right? And plus you can’t teach a woman how to use a lota – not at this age. How am I going to bring it up in conversation? Hey, so do you want kids? How many? Oh, by the way do you use lota? I can’t force her.”

“Indeed, there is no compulsion in lota,” I replied solemnly.

However, there have been exceptions to the rule. My roommate in law school was a white Army recruit from Marin who converted to Islam in college. He almost tearfully recalled how the virginal lota experience remains one of his top 10 best memories. He left the commode with spirits soaring and a zealous desire to proselytize the brilliance of using lota.

To quote his words: “Once you wash that crack, you never go back.”

Instead of fearing the lota, we as a society should tolerate and embrace the diversity of booty-cleansing techniques that are now available to us. Americans eventually accepted hummus and Bollywood music. Could the lota could be next? Regardless, it’s time to put an end to the self-loathing and fear and let the lota proudly step out of the water closet.