Who says Kate Upton is too fat? 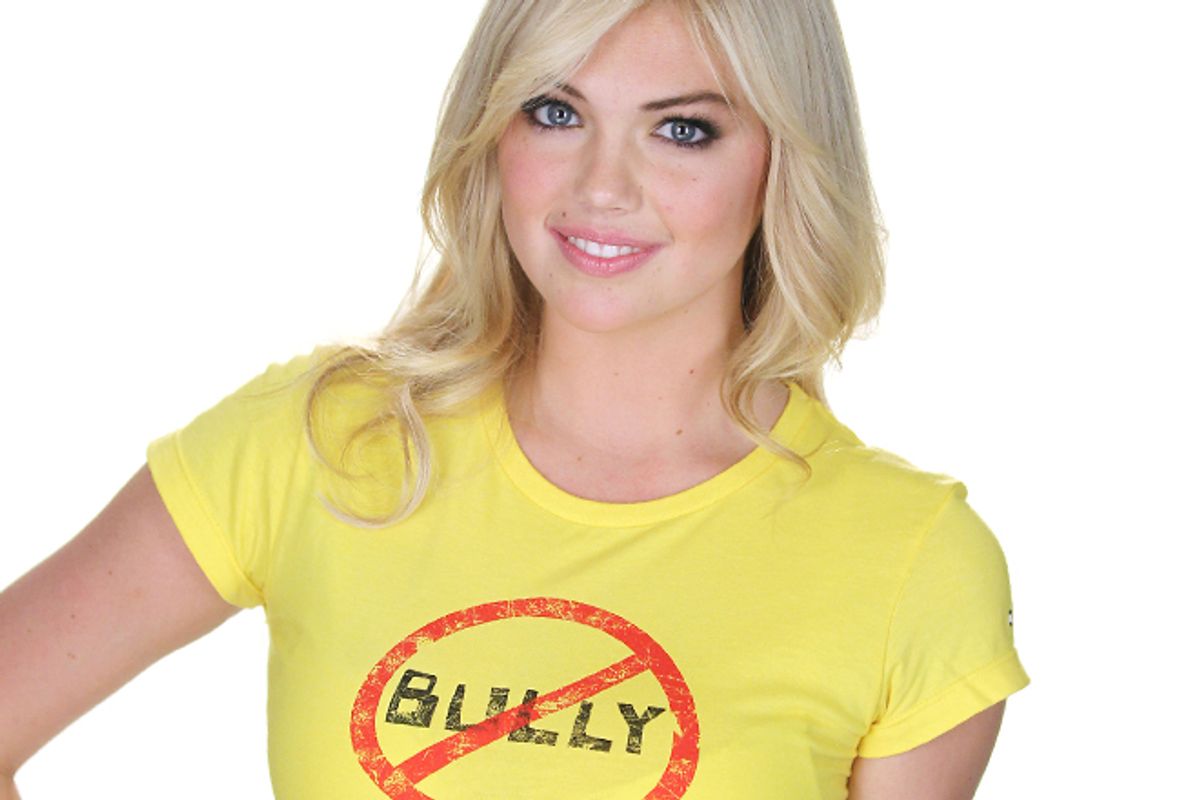 Nobody expects anonymous trolls on the Internet to be anything but terrible. But there's still plenty about the snarking on Kate Upton that went down recently on Skinny Gossip that scrapes a whole new level of the barrel. The part of the barrel where the cruelty is so deeply mingled with pathology that it's simultaneously infuriating and incredibly sad.

As the name implies, Skinny Gossip is not exactly a bastion of feel-good empowerment for the ladies. It is instead the brainchild of a woman in her early 20s who says she "prefers the skinny aesthetic" and describes herself as weighing in at 5-foot-7 and 100 pounds, which puts her about 30 pounds underweight. She doesn't post too much on her blog, but when she does, it's usually to complain that plus-size models make her "both angry and sick to my stomach" and lament that Lindsay Lohan "looks downright fat," even if she does cop to the distinction between "FAT by normal standards, of course – but fat by our standards." Skinny recently decided that Kate Upton, the woman whose body has been deemed sufficiently ridonk to grace the cover of the Sports Illustrated swimsuit issue, is "thick, vulgar, almost pornographic." She calls her a "piggie" with "huge thighs, NO waist, big fat floppy boobs," and, for the pièce de résistance, decides that "She looks like she would work in the back of a motorcycle shop in Nashville and give (bad) blow jobs for $25." She does, however, give her props for her "bravery" in letting herself go to seed like that. Thanks, girlfriend!

Amazingly, Skinny's incredibly toxic commentary isn't that far off from what Victoria's Secret's casting guru Sophia Neophitou declared to the New York Times earlier this year, when she said Upton was "too obvious" for the brand. "She’s like a Page 3 girl," she sneered. "She’s like a footballer’s wife." (Upton, for her part, lobbed back that "I’m doing fine in my career, I don't need to walk down their runway, so it's all good. She can think that and I can think whatever I want about her," adding that "Gisele's a football player's wife." Game point, Upton.)

Skinny's random, harrowing commentary might have been lost in the dregs of the Web had Reddit not linked to the site a few days ago, begging, "Someone stop this." Gothamist then noted Skinny's Upton post, promptly leading our anonymous Skinny Gurl to delete her helpful "starving tips of the day" like "Pay close attention to other girl’s bodies. Pick them apart – try to find faults even with the best bodies. Then apply these high standards to yourself," and "Thinspo is your best friend. You think you’ve lost weight? Check out some fashion models or skinny celebrities online and you’ll realize that you can probably do better."

Skinny has since made an elaborate statement about her motivations, insisting that "people think nothing of telling a thin woman – to their face, in front of an entire group of people – how skinny they are and even to suggest what they should eat. But I’ve never seen the reverse happen to an overweight woman." Which is kind of amazing coming from someone who has created an entire website to talk about what a fat whore Kate Upton is. But what makes her candid confession borderline tragic is that she goes on to insist that "We have never supported illness or self-harm," adding that her site is a community of "young women supporting each other in health and, in some cases, recovery." She also says that she's now "adding a section to the community with resources and paths to assistance for issues including depression, eating disorders, and self-injury."

Look, if young women who are deep within the culture of thinspo can actually talk in a safe, anonymous environment about how to heal and support each other, that's great. But if you're building your entire culture on the premise that people who are bigger than you make you "sick," if you're getting together to "pick apart" and body snark on your fellow humans, well, good luck with that whole health and recovery thing, folks.

Dear Skinny, I have to tell you, when you say "there’s nothing wrong with saying skinny is beautiful, just like there’s nothing wrong with saying curvy is beautiful … It's an opinion, and we're all entitled to them," it's heartbreaking. Because mentally healthy people can say skinny is beautiful or curvy is beautiful without expressing profound revulsion at how "disgusting" others outside that aesthetic are. Healthy people don't advise, "When in restaurants, ONLY order off the appetizer menu, and ONLY eat half of it." Seriously, that's not how people eat, even average skinny people. That's beyond a desire to be thin. It's obsessive and it's cruel. And the saddest thing is, it's not just vicious to the women you're so clearly repulsed by. Even more so, it's hurtful to the women who read you and think that what you're putting out there is in any way helpful, who are encouraged by your example of meanness for the sake of starvation. And mostly, dear Skinny Gurl, I can't imagine how that much bile isn't eating you right up.