Three new studies show inequality is growing. Depending on who is elected in November, it could get a lot worse 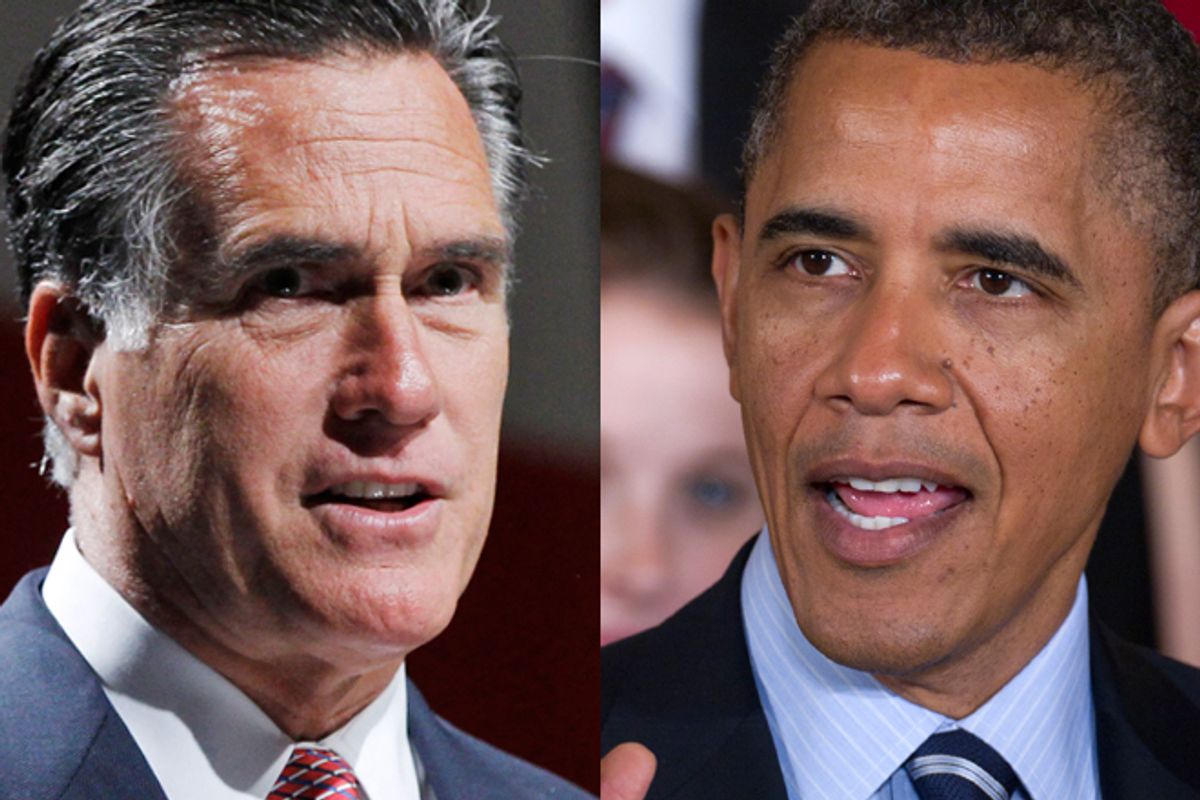 Three new reports on taxes, inequality and economic mobility add up to one conclusion: The 2012 presidential election should be about one thing, and one thing only: class warfare.

Let's start with a report from the Pew Charitable Trusts, "Pursuing the American Dream: Economic Mobility Across Generations."

The Pew Economic Mobility Project has been tracking the economic status of thousands of families since 1968 -- the data covered in the current report is through 2009. And there is some good news: Absolute income has increased for Americans of all economic classes, from the poorest to the richest. The richest Americans have seen much larger relative gains, and, naturally, are far more immune to skyrocketing healthcare and education costs than are the poor, but at least part of the American dream is still intact: Children are still earning higher incomes than their parents.

But then comes the bad news: When one measures wealth -- the total assets held by families -- instead of income, the picture is substantially different. As Catherine Rampell summarized in the New York Times:

The median person in the poorest quintile has a family net worth that is 63 percent less than that of his counterpart a generation ago: $2,748, versus $7,439 ...

The median family in the top socioeconomic class today (i.e., the family at the 90th percentile) is worth $629,853, compared to $495,510 in the last generation. That’s a 27 percent increase in the size of the median fortune in the top income stratum.

If you're scoring at home: Rich: richer; Poor: poorer.

Now let's move to "Inequality and Redistribution During the Great Recession," a research paper produced by the Minneapolis Fed.

In 2010, the bottom 20 percent of the U.S. earnings distribution was doing much worse, relative to the median, than in the entire postwar period. This is because their earnings (including wages, salaries, and business and farm income) fell by about 30 percent relative to the median over the course of the recession. This lowest quintile also did poorly in terms of wealth, which declined about 40 percent ...

However, even as earnings plunged, disposable income and consumption managed to hold even, relatively speaking, for the poorest Americans as compared to other classes. This is a bit of a mystery, noted the authors, who believe it can be explained by aggressive government redistribution and tax cuts.

Our main substantive conclusion is that government redistribution in the Great Recession was at historical highs and partially shielded households from experiencing large declines in disposable income and consumption expenditures. The same households, though, have experienced losses in net wealth, and this might make them more vulnerable to further or more persistent earnings declines in the future.

If you're still keeping score: While the rich were getting richer and the poor poorer, the Great Recession absolutely hammered the worst-off Americans, but substantial government support -- unemployment benefits, food stamps, Medicaid, tax cuts -- saved the most vulnerable Americans from utter disaster.

And that brings us to our third report, the Congressional Budget Office's latest numbers on federal taxes: "The Distribution of Household Income and Federal Taxes: 2008-2009."

The bottom line: In 2009, as a result of tax cuts included in the stimulus, Americans ended up paying the lowest percentage of their income in federal taxes since 1979.

The observations included in these reports mutually reinforce each other. For example, one reason why the wealthiest Americans have done so much better than everyone else is directly related to substantial cuts in the capital gains tax rate over the past several decades. High unemployment and the collapse in home prices as a result of the Great Recession, on the other hand, have a disproportionately greater effect on poorer Americans, whose net wealth has been declining over past decades.

The numbers also beg to be put in political context. Over the long term, the rich have been getting richer and the poor poorer. In the short term, the poor took the brunt of the impact of the Great Recession, and were only kept afloat through government assistance. However, as tax rates have fallen to historic lows, it has become more and more difficult for the federal government to find the resources necessary to ameliorate widening inequality.

Now consider the fact that the Republican candidate for president wants to cut taxes even further, while eviscerating the social welfare safety net that is the only thing staving off complete economic disaster for poorer Americans. It's class warfare all right, but one side seems to have already won.